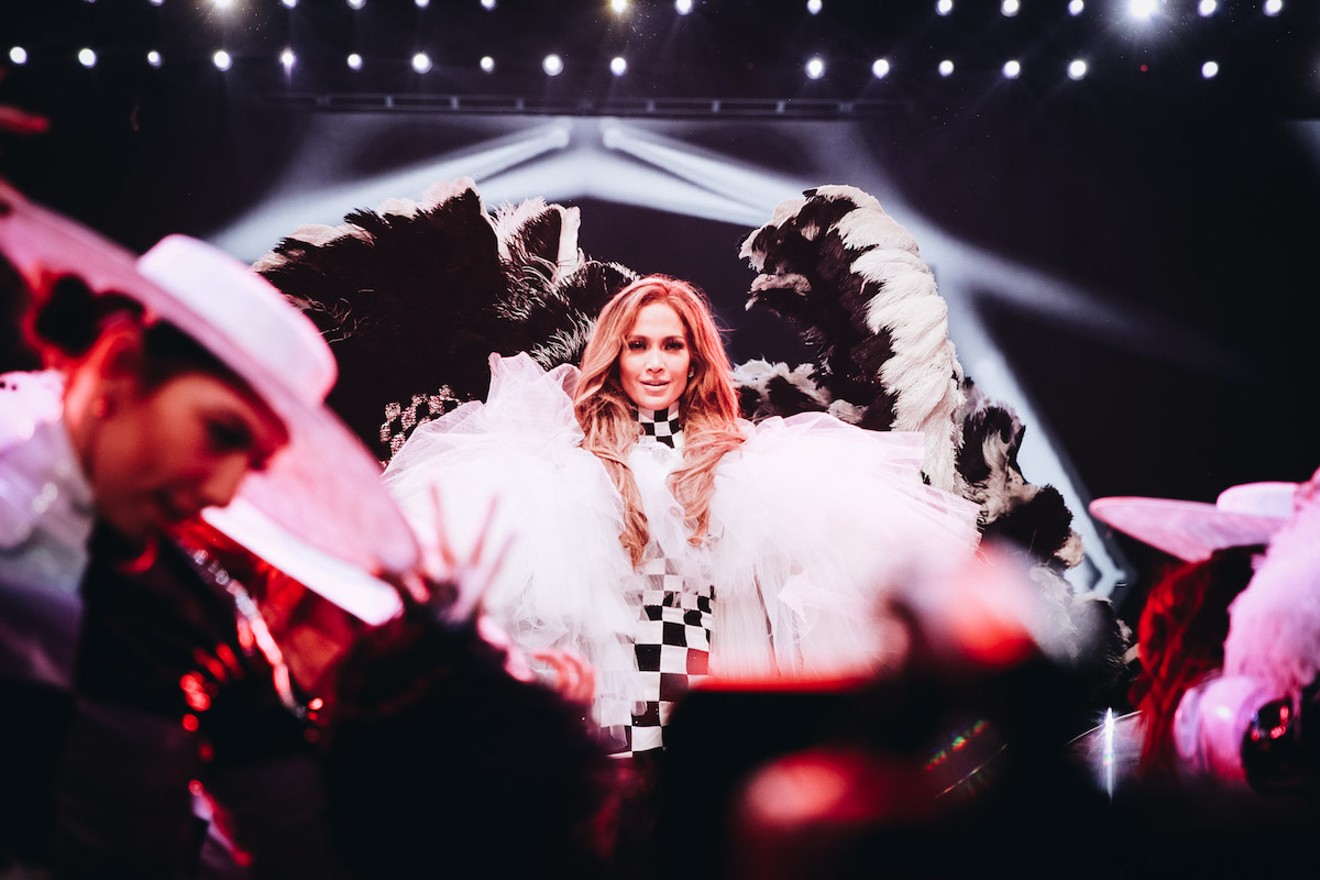 Jennifer Lopez Rich Fury
Jennifer Lopez: With World of Dance. J.Lo is one of the most underappreciated live performers of her generation. When many big names hit arena stages, their mouths move, but their bodies remain relatively static throughout the night. This Puerto Rican-American princess does all of her crazy dance moves while singing into her tiny mike — and it's mesmerizing. The star of The Wedding Planner is headed to the American Airlines Arena for a three-day stop on her It’s My Party: The Live Celebration Tour. Take out your wallet and go see "Jenny from the Block" get real "On the Floor" of the Heat's home court. For a recap of what to expect, check out our review of Jennifer Lopez's last show at the AA Arena. 8 p.m. Thursday, July 25; Friday, July 26; and Saturday, July 27, at American Airlines Arena, 601 Biscayne Blvd., Miami; 786-777-1000; aaarena.com. Tickets cost $49.50 to $115.

Carly Rae Jepsen: With Phoebe Ryan. When Canadian singer Carly Rae Jepsen stepped into the limelight with her 2012 smash single, “Call Me Maybe,” it was easy to assume her fame would last only through the summer. After all, the track, while harmlessly pleasant, was never monumental. It gained traction after Justin Bieber tweeted about it in 2012 and later posted a video in which he, Selena Gomez, and Ashley Tisdale jammed out to it. The endorsement from Bieber, then at the height of his heartthrob fame, boosted the single's audience. Following the song's success, Jepsen took a step back to create an intricate record inspired by nostalgic, campy '80s pop and delivered one of the most surprising and well-received pop records of the decade: 2015’s Emotion. The album was adored by critics and sparked a cult following, turning Jepsen skeptics into fanatics. See her get emotional at the Fillmore Miami Beach this week and read more about her unlikely trajectory in "How Carly Rae Jepsen Went From Billboard One-Hit Wonder to Indie-Pop Savior." 8 p.m. Friday, July 26, at the Fillmore Miami Beach, 1700 Washington Ave., Miami Beach; 305-673-7300; fillmoremb.com. Tickets cost $36.50 to $127.50.

Dave Matthews Band. It would be difficult to find a band that has sustained as much derision and reverence in equal measure as Dave Matthews Band. Equal parts beloved contemporary jam band and hipster punching bag, the Charlottesville, Virginia, group is known for extended improvisation, unpredictable set lists, and singer-songwriter Dave Matthews’ unique stage presence. It’s also known for things like its devoted yet detested fan base, some regrettable acting stints by its frontman, and that time it dumped shit all over a ferry full of people in Chicago. Seriously. This weekend, the divisive band will return to West Palm Beach’s Coral Sky Amphitheatre for yet another run of summer shows. In advance of those gigs, which will mark the 14th time the group has played back-to-back nights in South Florida since 2002, it’s worth taking a moment to consider whether DMB really deserves all the hate it gets. Read James Biagiotti's thoughts on the matter in "Dave Matthews Band Doesn't Deserve Your Derision." 8 p.m. Friday, July 26, and Saturday, July 27, at Coral Sky Amphitheater, 601-7 Sansburys Way, West Palm Beach. Tickets start at $45 via livenation.com.

Rick Moon
Julian Martin
Rick Moon. The path leading to Rick Moon’s apartment is lush and green. It’s 1 p.m., the sun is high, the temperature is full-on summer, and the flat horizon of Biscayne Bay glitters behind an equally tranquil community swimming pool shaded with palm trees. It’s an idyllic if somewhat oppressive setting that becomes pregnant with symbolism the longer Moon chats with New Times. “Welcome to my cave,” he says, letting a reporter inside and leading the way to a cool front room that serves as his studio. The visit is to discuss his new EP, Electric Lunch, set to drop July 23 via the local indie label Public Works. Read the full interview with the artist in "Rick Moon Is the Earnest, Imperfect Rock Antihero Miami Needs." 9 p.m. Friday, July 26, at Gramps, 176 NW 24th St., Miami; 305-699-2669; gramps.com. Admission is free.

Korn and Alice in Chains: With Underoath and Ho99o9. Korn may have been kind of corny since the day the nu-metal act struck its first note, but there's no question that Jonathan Davis and his cohorts could cast a spell on music-loving crowds with tendencies toward fanaticism. Davis is a certain kind of musical genius who went on to make his own EDM style as JDevil, working with Skrillex and Infected Mushroom. But this weekend, he's back with the band to perform at Coral Sky alongside the beloved '90s metal act Alice in Chains, which persists despite the loss of its distinctive vocalist Layne Staley. This will be one heavy show set in the perfect place: the dense, swampy humidity of West Palm at the height of summer. You'll feel like the "Rooster" out there. 6:30 p.m. Sunday, July 27, at Coral Sky Amphitheatre, 601-7 Sansburys Way, West Palm Beach; 561-795-8883. Tickets cost $29.50 to $125 via livenation.com.
KEEP MIAMI NEW TIMES FREE... Since we started Miami New Times, it has been defined as the free, independent voice of Miami, and we'd like to keep it that way. With local media under siege, it's more important than ever for us to rally support behind funding our local journalism. You can help by participating in our "I Support" program, allowing us to keep offering readers access to our incisive coverage of local news, food and culture with no paywalls.
Make a one-time donation today for as little as $1.