Best Bar When It's 90 Degrees Out 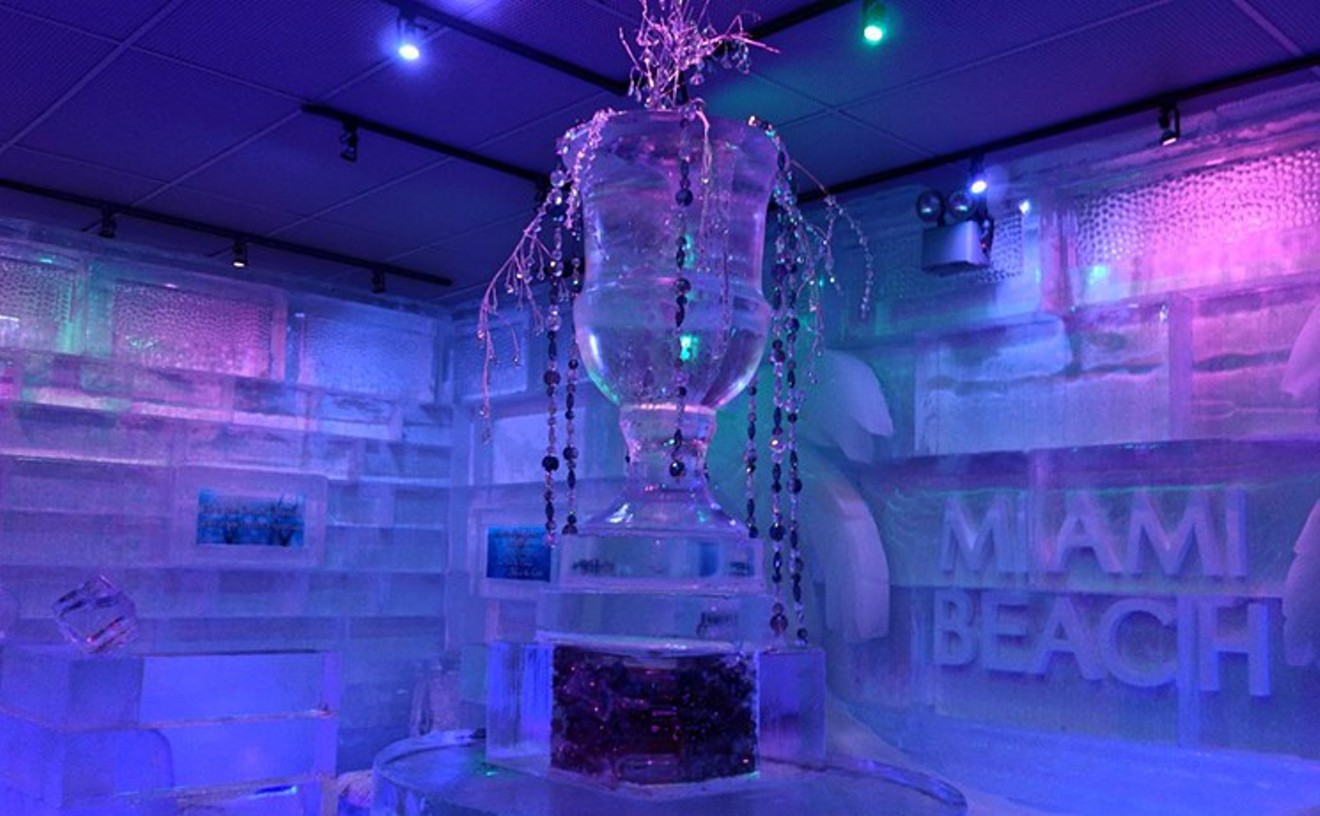 Sure, we have palm trees and the ability to wear bikinis year-round. The flip side, however, is the radioactive-intense sun and 99 percent humidity we get during Miami summers. And it's a good day when we're not being carried off by some tropical storm. So when the mercury hits 90 degrees, get thee to Drinkhouse Fire & Ice. Before you even walk inside, your core temperature seemingly drops at the sight of the cool blue lighting and pictures of what looks like a snow queen. Inside, you'll don a faux fur coat and hat before walking into what looks like a meat locker. Surprise! It's like being inside the Disney movie Frozen — except with cocktails! Sidle up to the ice bar (made of ice) and order a shot of vodka or a cocktail — served in a glass made of (what else?) ice. Sculptures change colors to the music, bathing you in a sea of frozen green and red. Admission to the ice bar costs $17 ($34 includes two drinks), and it's recommended you stay no longer than 45 minutes before your pampered Miami blood can't take the 23-degree freeze. But, oh, how delightful those 45 minutes in a crystalline wonderland will be. 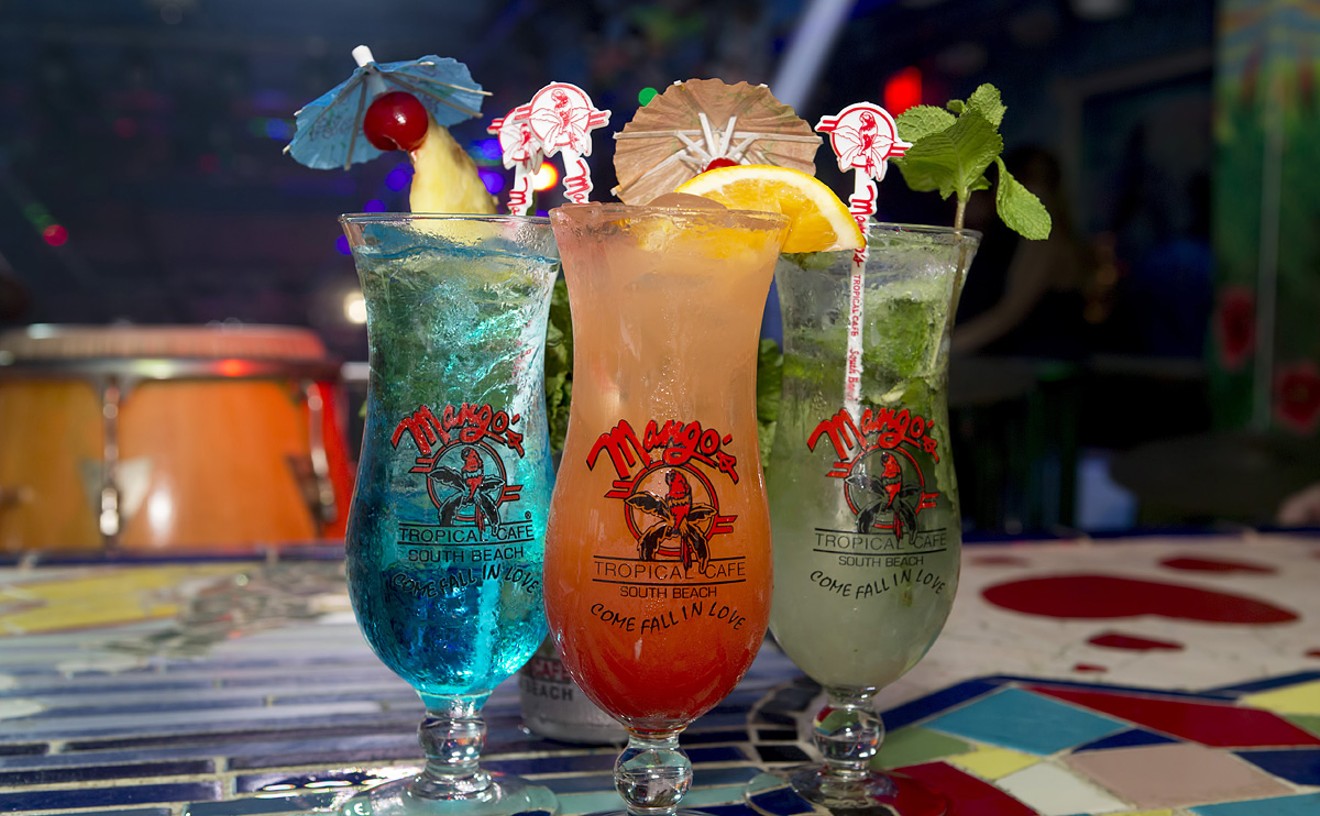 Ocean Drive is perhaps the most touristy strip in all of Miami-Dade, but there's something to be said about being a tourist in your own city. (The hashtag #ilivewhereyouvacation was created for a reason.) But in a sea of overpriced drinks, Mango's Tropical Café reigns supreme. And because of its Tropicana vibe, the drink of choice here is the mojito, which come in 19 varieties. However, stick to the classic, because the mixture of muddled mint leaves, sugar, lime juice, rum, and a splash of soda is magical and doesn't need any bells or whistles. And the price, $12.25, is comparable to drinks on either side of the causeway. For an extra $3.50, you can sip that mojito from a souvenir hurricane glass so you can remember your staycation after the 15-minute Uber drive home.

Although owner Eddie Leon and brewers Michael Demetrius and Piero Rodriguez have been making beer for quite a few years, it's been just one year since the company's taproom opened to the public. While most Miami breweries chose Wynwood as their operational hub, Leon picked Doral, which has turned out to be one of the fastest-growing cities in Miami-Dade. Call it foresight or luck, but the move worked well. His taproom is so busy that it's already too small. Leon is planning a mega-taproom and brewery expansion. When complete sometime this summer, the brewery will have 21,000 square feet of space, with 1,700 square feet devoted to the taproom. Expansion means more amenities, such as a full bar featuring beer and craft cocktails, a kitchen serving food, and space for private parties. Leon has always been innovative, starting his own distribution company and then signing with Cavalier Distributing to expand his beer's scope. MIA has always made great beer with an eye to the tastes of its home city. Now, with an expanded taproom and distribution options, the sky's the limit. 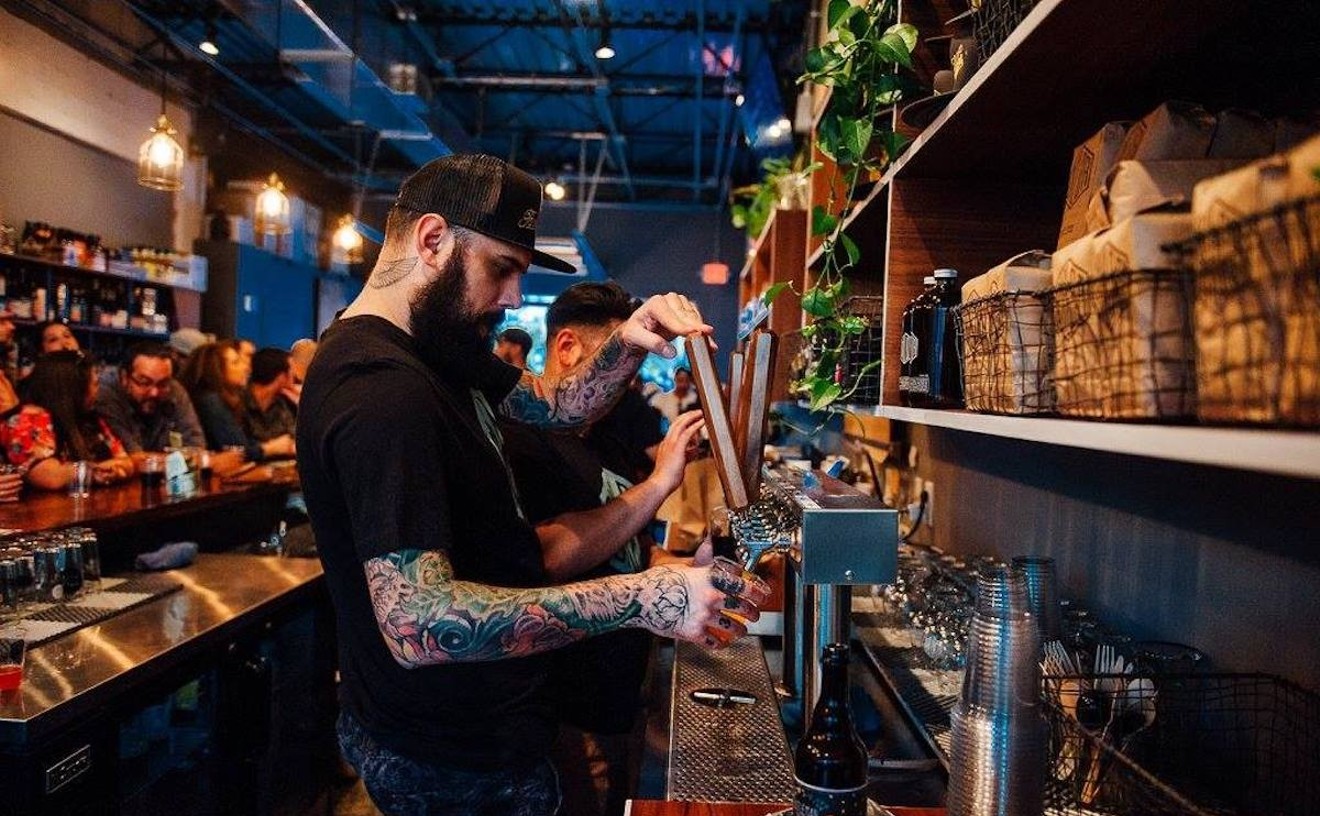 If you want to tap into the best beers, you'd best go to the source — Wynwood. There's no denying that this artistic neighborhood is the epicenter of Miami's brewing scene. It also stands to reason that Wynwood has a kick-ass beer bar. Don't go to Boxelder seeking a massive 30-page binder full of beers — do you really need to peruse thousands of artificially flavored fruit beers? Instead, you'll find a well-thought-out selection of about two dozen beers you want to drink. The selection rotates, so check the TV screens, which list each beer available that day on tap, along with a description, price (usually $7 to $11), ABV, and which glass will be used to serve it. Selections from local breweries such as J. Wakefield and MIA share the board with beers from California and Colorado — after all, there's a big country to explore one pint at a time. If you can't make up your mind, just ask the person sitting next to you. The room is always filled with lively chatter about hops and malt. If you fall in love with a particular brew, Boxelder also sells growlers, so you can sip your favorite in the privacy of your own porch or balcony. With a food truck usually parked in back and a convivial outdoor area, it's a great place to hang out. Put your feet up and order another. The beer is cold, and the atmosphere is warm. 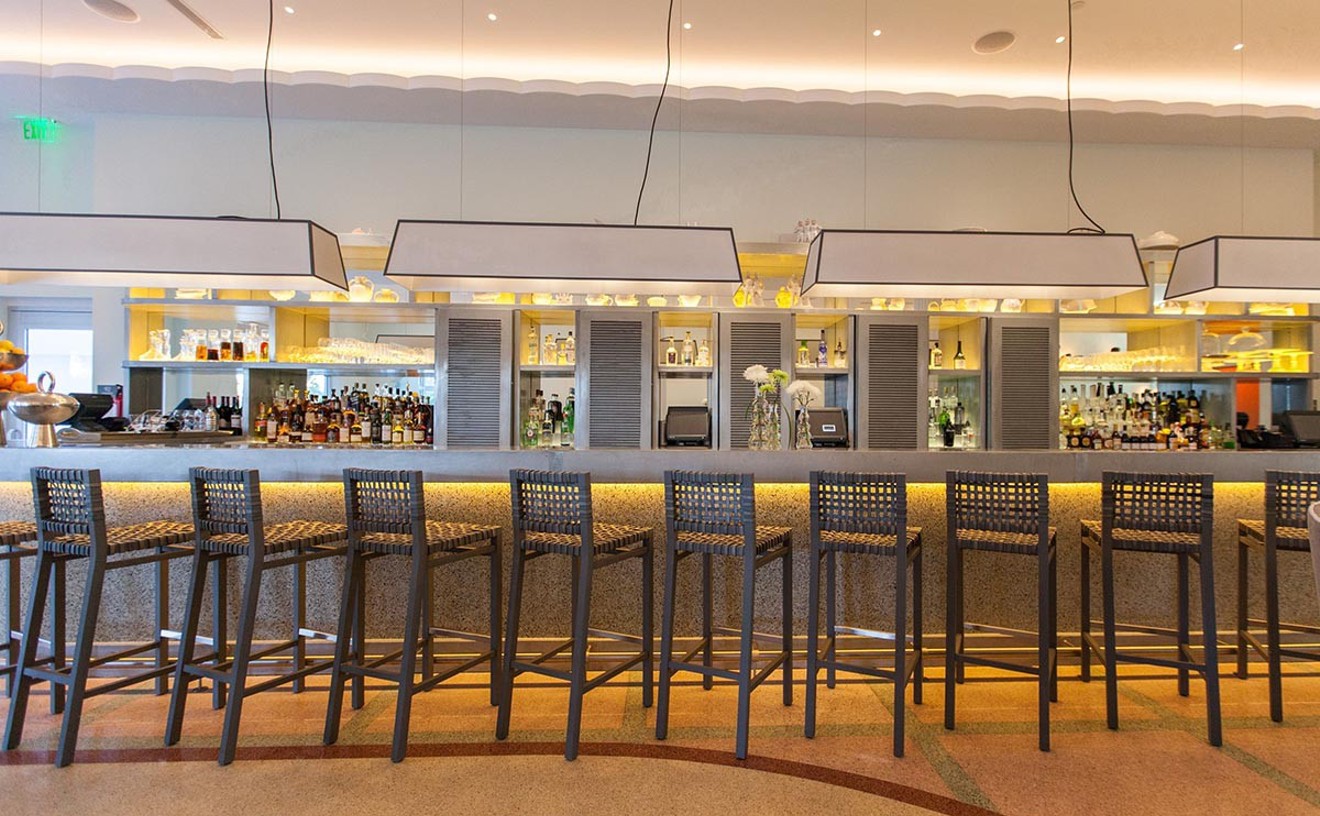 Martinis are both cocktail and lifestyle. As such, they must be respected and enjoyed. This is not a drink to be guzzled from a red Solo cup while Anthrax plays on the juke in some crummy dive bar. For a proper experience, grab a seat at the Traymore Gin Bar. A soothing nod to Miami Beach's art deco era, the room features silver tones, and bottles of gin are the main decoration. Your bartender greets you with a warm welcome, along with shiny platters of assorted nuts and olives. Ladies are offered freestanding racks for their handbags alongside their barstools. Though there are other cocktails, you're here for a well-crafted martini. Order it dry or dirty with blue cheese olives ($15). For a true experience, select a special spirit from the bar's collection of more than 30 gins from around the world. As you sip this elixir of the gods, Sinatra croons softly as palm trees sway gently outside. This is as far from downing hootch in a red Solo cup as it gets.

Best Bar Program at a Restaurant

Tom on Collins at Beachcraft 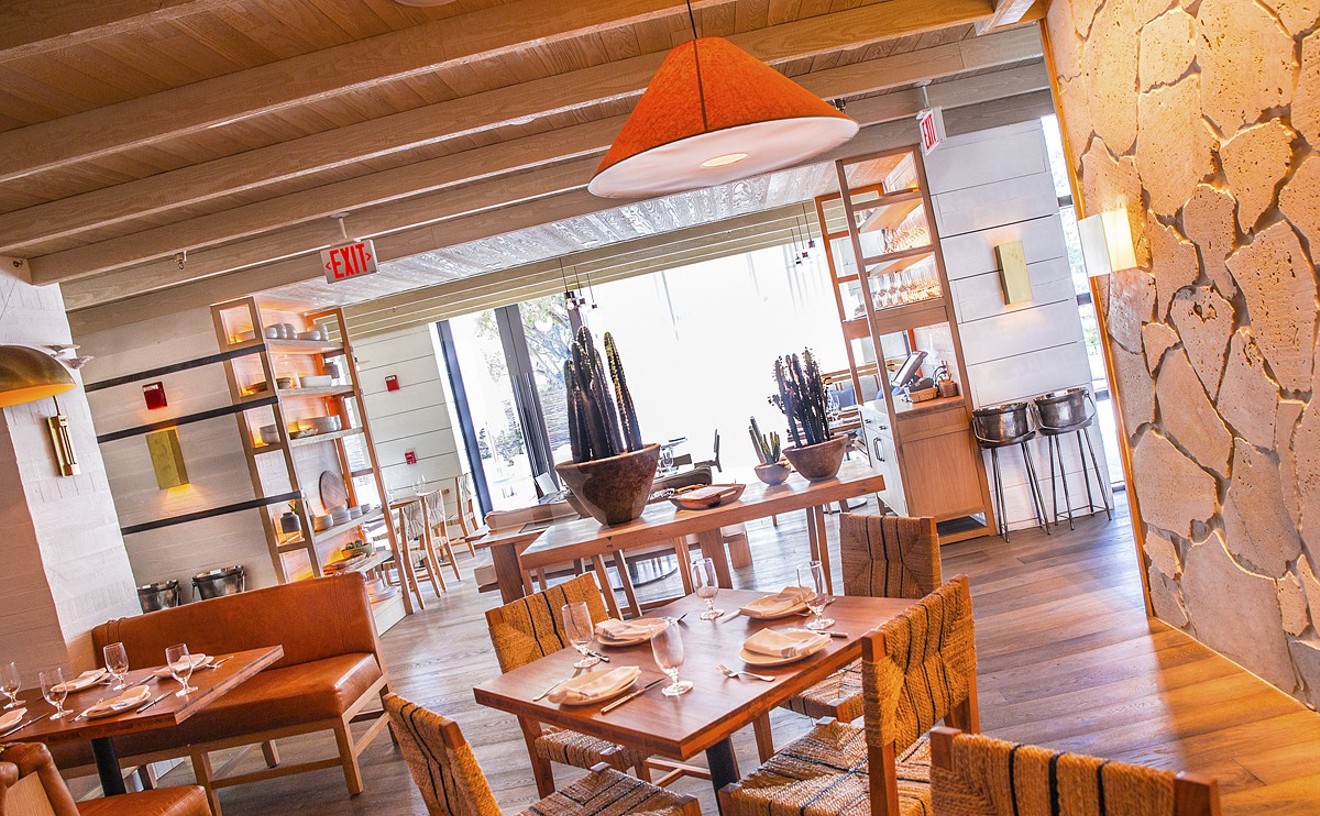 Tom Colicchio isn't just any celebrity chef. The multiple James Beard Award winner also holds an Emmy for his work on Top Chef and is heavily involved in social and political activism, especially on issues such as GMO labeling and the use of antibiotics in our foods. It stands to reason, then, that his Miami Beach restaurant, Beachcraft, sources only the best produce for its kitchens. This fresh and local mentality also works its way onto Colicchio's bar menu. The drinks use fresh fruits, herbs, and flowers to create unique and delicious cocktails. The cocktail menu changes with the seasons to use what's fresh, such as a bright Jalisco Kiss, with tequila and juniper-rose water syrup, ($15) and a Where There's Smoke There's Fire, with rye and blood-orange juice ($16). One can't-miss is the Tom's Flip on Collins, a frothy take on the classic cocktail for which the bar is named ($14). Whatever you order, know that each drink is made with the same care that the Beard winner takes on his food menu.

Have you ever gone out for a few glasses of wine with a friend and then lamented when the check came: "I could've had an entire freaking bottle for this price!" Actually, at Happy Wine in Coconut Grove, you can get a bottle of wine for the price of a few glasses. It's a lovely old two-story house converted into a wine bar. Choose a bottle and pull up a stool made from wine crates at a wine-barrel table. If you have trouble choosing, the friendly staff will help. Though prices vary, there's a good selection of wines less than $25 per bottle from around the world. Even with an $8 corkage fee, it's a bargain. Add to this a wonderful tapas menu that ranges from a cheese board ($24.99) to fried oysters ($15.99), and live music most evenings, and you'll swear you're in some hideaway in Barcelona instead of the Grove. Happy Wine also has a well-stocked wine shop, so if you fall in love with a Barolo, you can take it home.

You stayed out too late last night and had a few too many. Now the Miami sun is burning your retinas, your heart is racing, and your skull is beating out an angry tribal message of death. You need La Perrada de Edgar's famous Colombianos — Colombian hot dogs topped with otherworldly creations. Some here are named after countries, some after owner Edgar Gomez, but none of the monikers makes sense. Take, for example, the Swiss hot dog ($6.49), topped with mozzarella, corn, bacon, pink sauce, and potato sticks (none of which Switzerland is known for), or the Super Edgar, which gets freaky by topping a dog with cheese, pineapple, blackberry, plum, and whipped cream ($6.49). Somehow it works. The seemingly insane combinations both taste great and serve a utilitarian purpose of replenishing your shriveled-up hull with much-needed sodium and protein. If you're not feeling up for an adventure, get the salchipapa — an order of fries mixed with plain hot-dog chunks ($6.99) — and you'll be feeling right in no time. 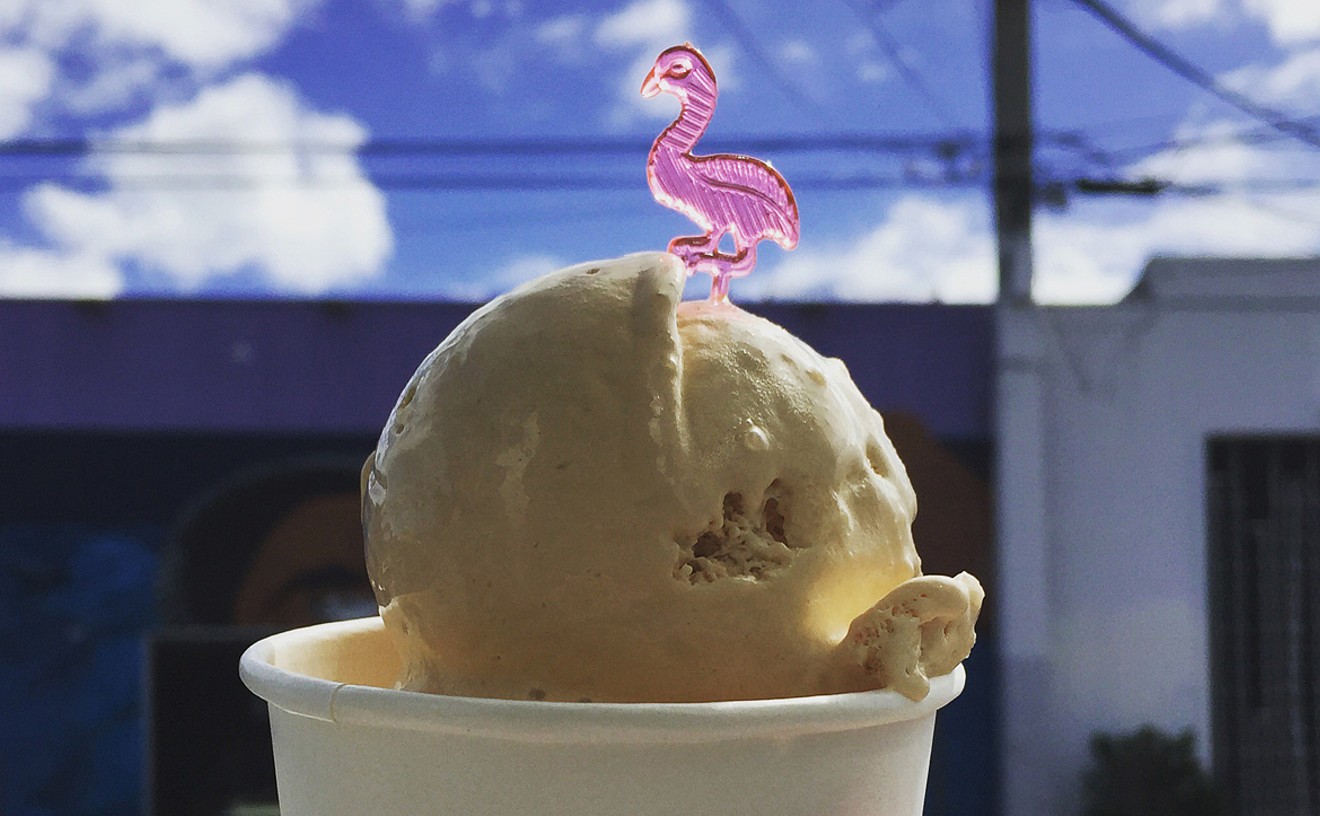 Serendipity, a hole-in-the-wall ice-cream shop in Wynwood, started out as a rogue pop-up during Art Basel 2014. Now it's a permanent fixture, which means its boozy, one-of-a-kind flavor pairings are always at your fingertips. The artisanal shop is owned by Jessica Levison, who has learned that the Wynwood area has a big appetite for alcohol-infused ice cream. She says flavors such as rum raisin, white Russian, and dark chocolate whiskey are much more popular than her nonalcoholic flavors. This has prompted her to experiment and develop recipes using local beers and spirits. She offers special-order popsicle varieties such as mojito, strawberry daiquiri, piña colada, and passionfruit vodka too. Her flagship location is in Surfside, but most of her alcohol-inspired treats are offered at her Wynwood spot.

Yo, fro-yo. Why are you so tasty? So versatile? So good at just about any time of the day? MC Hammer should've made a song about you. Vanilla Ice was on the right track. And so is Yuzu Frozen Yogurt & Crêpes (open from 11 a.m. to 11 p.m. daily except Sunday, when hours are noon to midnight). Grab a friend. Take your boo. Then head to Brickell for a healthier way to chill out. The homemade recipes are dope. Check out fresh mint, raspberry, or salted caramel. Or snag the classics: cookies 'n' cream, vanilla, and dulce de leche. Twelve all-natural rotating flavors come in low-fat or nonfat and are made with probiotics. Eat 'em how you like — by themselves or with fresh fruit and other sweet toppings. Whichever way you decide to dip, flip, or spin it, you definitely can't touch this.