Size matters. You don't feel cramped inside this spacious emporium, home to an ever-changing smorgasbord of fashions from bygone and more recent eras. The pleasant staff will graciously assist your quest for something specific, be it a Far From Heaven-style cocktail number, a Pucci girdle, or a seriously shouldered Claude Montana dress. Many items are sold on consignment, so depending on your timing, you may strike a mother lode, the moment most every vintage shopper lives for.

BEST PLACE TO GET FRAMED

That dazzling Renaissance-style portrait of your pet orangutan holding a bouquet of flowers is finished at last, but now you can't decide how to frame it. The Meeks family can help. For the past fifteen years (thirteen of them in Coral Gables), Steve Meeks, his wife, sons, and trusty employees have been making Miami's art look fabulous and keeping it safe from damaging forces such as excessive light, high humidity, or your garden-variety psycho wielding a knife. The Lowe Art Museum, the Wolfsonian-FIU, Miami-Dade Public Library, and the Margulies Collection are just a few of the top-drawer institutions that have benefited from Borders' fine work. You should too. The friendly folks will patiently guide you through their 10,000 frame samples, whether your budget allows the $2.50-per-foot metal border or the $250-per-foot hand-carved gilded model. If you need to acquire more art, consider taking something right off the wall. Their two-year-old, 11,000-square-foot space in Little Havana often hosts exhibitions for local groups or artists showing solo. 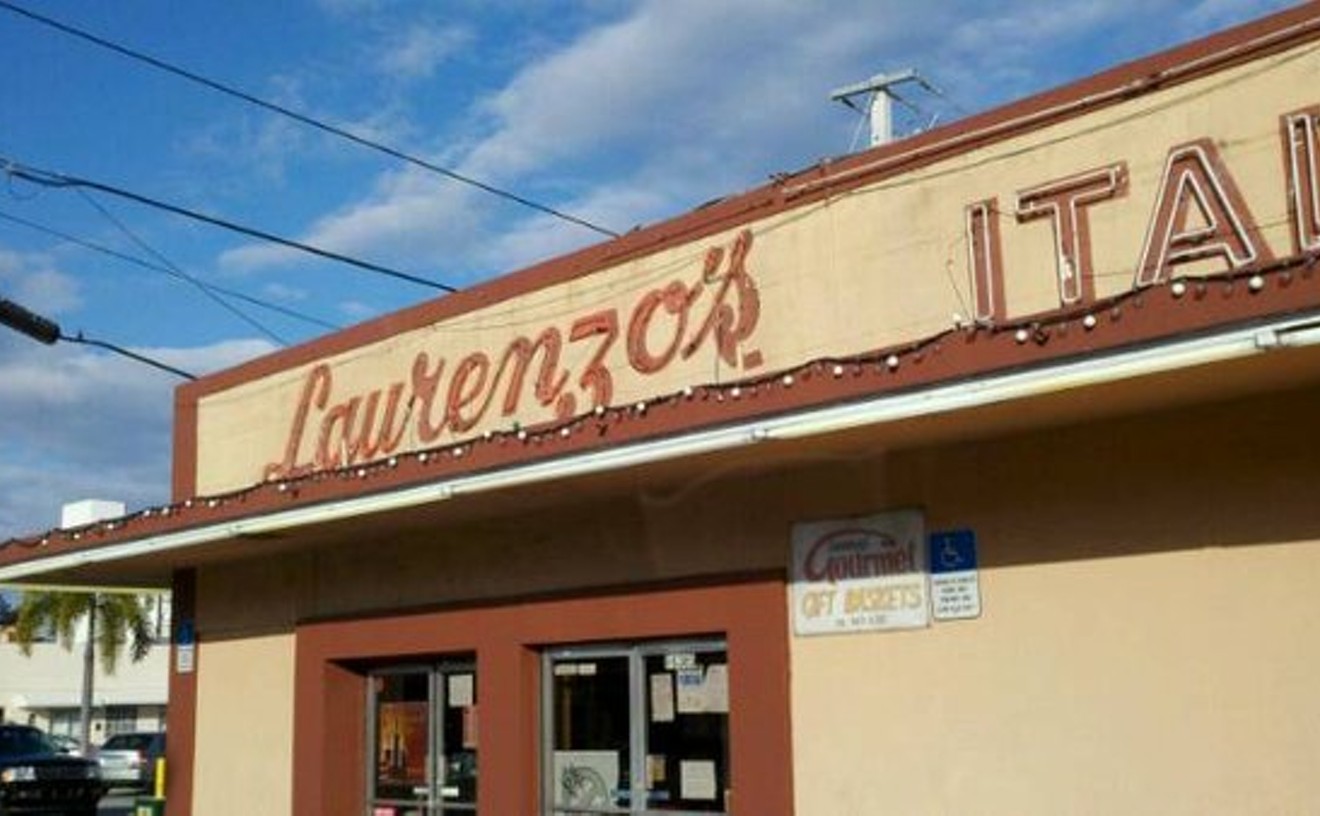 Visiting Laurenzo's is fun even if you're not looking for wine. There is no finer Italian specialty market in South Florida. Even its café can hold its own against most Italian restaurants. The wine selection, however, is something truly special. Over the years it has developed as the idiosyncratic expression of one man's taste -- very good taste. That man is wine connoisseur Matt Adler, who recently left Laurenzo's but whose able protégé Peter Montiel carries on. Adler and Laurenzo's have rightly boasted that theirs is the largest independent wine store in South Florida. By that they mean the store's buyer personally selects each and every bottle you see on the shelf; no mandates from some distant headquarters. The selections are always intriguing -- especially the vast array of Italian wineries -- but the real draw is the pricing. Laurenzo's is almost always less expensive than its competitors, including stalwarts like Crown and Sunset Corners. Frequently Laurenzo's prices are a lot lower, so low you wonder why you'd ever buy wine anywhere else.

You can get sofas, chairs, beds, tchotchkes of all kinds, and from every country. A recent scene: Hairstylist who frequents the place had her eye on one of those darkly tarnished replicas of Donatello's David, about a foot high, bronze-going-green. "That lidless, lipless decadence," she whispered mischievously. "Donatello would have gotten down on the Beach!" After some haggling with Amelia the salesgirl, the price was right, coming down from $45 to $25. "We're the best!" Amelia bragged. "You can spend hours in here. Look! Real aluminum ice-tea glasses from the Fifties in fruit colors -- creamsicle orange, Saturn red, TV yellow ... snowsled silver!" 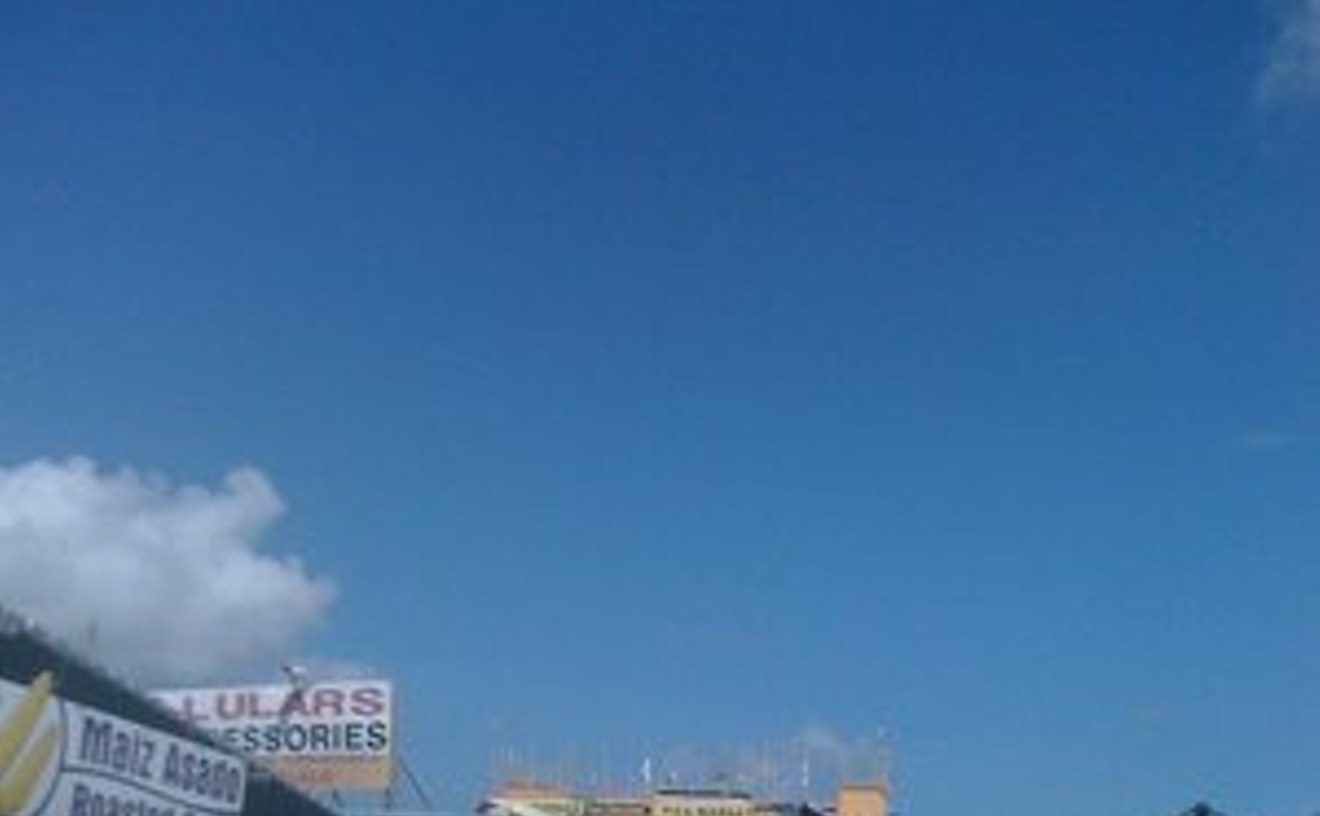 Following a 2002 incident when a Key Biscayne resident drove into a parking lot via the exit and punctured all four tires on those mean-looking spikes they have at rental car outfits too, this flea market's general manager, Scott Miller, put up "about 500 traffic signs" so navigating the streets and parking lot "is no longer an adventure," he promises. Once you get inside, however, that's a different story. Open seven days from 6:00 a.m. to 6:00 p.m., the market -- eighteen years and going strong -- is teeming with more than 1000 vendors, including 70 offering farm-fresh produce, plus thirteen eateries. Shoppers and sellers come from around the world, and these days record crowds are pouring in, mostly on weekends, with an average of 85,000 hunting the sprawling grounds over two days. You can find most anything at this flea, but Miller notes, "We do not do gold-filled teeth." That was at a flea market across the county line in Broward, and supposedly those parking-lot dentists were shut down.

No one along the Boulevard of Broken Dreams that is Biscayne has done more to beautify the strip than florist Geraldo Rios. While the police mount sweeps of hookers and tricks and pimps, and city bureaucrats issue code-violation fines, Rios has taken his own initiative to improve his block by decorating the two-story building that houses his shop with hundreds of stuffed bears and other fuzzy friends to celebrate Valentine's and Mother's Day. Rios's decorations are not just beautiful, they're a kind of public service for all of us who forget about our sweeties and, heaven help us, even our mothers on these special days. The sheer excess of Rios's decorations reminds us of the approaching holiday -- and his special 24-hour schedule allows any errant son, daughter, or lover to drop in and pick a bouquet on the fly.

A misnomer if we've ever seen one. Dan had a lot of loyal customers, so when Manfred and Josephine Wenzel immigrated here from Germany and took over the business 26 years ago, "We didn't change anything," Mrs. Wenzel says today. Completely utilitarian shop space, with all the artisan tools Mr. Wenzel brought from the old country, where he studied camera repair for three and a half years in the great German tradition: "No computers! Za more sophisticated za camera, za more trouble! I'm an old man from za old school! [Film] transport and electronic shutter speed are complicated." It's why virtually all of Miami's professional photographers patronize Dan's. Wenzel, of course, will work on digitals, which he predicts will take over completely in ten years. He's sophisticated in not wanting to name a "best" camera, but his voice rises when you mention Rolleiflex and Voigtlander, two traditional German camera manufacturers who, like Leica, set the standard. "Right now we're in business. Later, when za digitals vin, I'll sit at home and vatch the pool through the back door. But not yet!"

Brightly colored beaded flags depicting vodou gods, snakes, and apparitions decorate the walls of Papa Paul's emporium of the spirits in Little Haiti. The flags drape above vitrines full of powerful objects such as wood-carved saints, hand-stitched satin kerchiefs in myriad hues, and cloth dolls with no faces. Painted maracas, devotional beads, and various perfumes and tonics for luck, love, and batting down evil spirits all can be found here. Papa keeps things friendly and welcoming, especially to the uninitiated. He also has space available for private consultations. If you're lucky, you might receive a tour of the back room -- a spacious garage decorated with worship murals used as a temple. You'll be luckier still if you are able to witness one of Papa's intense and beautiful ceremonies performed there.

Not much separates scooter rentals. Most are located on South Beach, often in small storefronts, and rental rates don't vary that much. Groov-E-Skootz, however, stands out for its selection of scoots for sale, in-store and online. In the gas-powered arena, they carry lots of Kymco's models, but also have Moskito and Hyosung. Among the electrics you'll find Bladez, City Bug, X-port, Currie, Charly, Schwinn, and X-Caliber. Also mini-gas scooters from Bladez and Go-Ped, plus electric bikes by E-Go and Voloci. As if that weren't enough, Groov may be unique in that you can also dance for your scooter. That's right. Every few months the store sponsors a break-dancing contest and the winner (these guys are really good) takes home a scoot.

It's hard to believe that Worldwide News stands alone in this major metropolitan area as an excellent, independently owned resource for newspapers and magazines. Other contenders like South Beach's News Café come to mind, but Worldwide trumps them by carrying an enviable selection of small-print 'zines, foreign publications, trades, and nudies. It doesn't have everything, so you may have to go to Borders to pick up the latest issue of the Village Voice. Yet Worldwide's continued dominance in this category (more than seven awards) speaks volumes about its admirable collection of titles and the frustrating lack of good competition for magazine lovers.