Zhao Gang's Cocksucker Blues (2014–15). Courtesy of the artist and Long March Space
Contemporary Chinese artist Zhao Gang will celebrate a career milestone this week. His first solo museum exhibition in the United States, "Zhao Gang: History Painting," is set to open this Friday, May 24 — and it’s happening right here in the Magic City.

“I think it’s particularly interesting for this to be one of the first shows of Chinese art happening in Miami, because Miami is such a repository of visual culture,” says Christian Viveros-Fauné, a guest curator at Pérez Art Museum Miami who organized the exhibit with assistant curator Jennifer Inacio. He also notes Miami’s connections to Latin America. “China has become a major player in Latin America — it’s a major player everywhere,” he says. “Because of these cultural, economic, and social ties, I think it’s an important thing to have someone like Gang, who is an intense bridge between Chinese and American culture, exhibited at a place like PAMM.”

Gang launched his career at age 16 as the youngest member of the Stars Group, a small troupe of avant-garde artists working in China in the late ‘70s and early ‘80s that also included Ai Weiwei, Huang Rui, and Ma Desheng. They were largely self-taught and critical of the Chinese government’s regulations and restrictions on artists, instead valuing freedom of expression and individuality. They’re best known for organizing a 1979 exhibit outside the China Art Gallery (now the National Art Museum of China) in Beijing after they were denied permission to show their work in the museum. When the police shut down their makeshift exhibit, they organized a protest march.

Zhao Gang's MaoCoin (2006).
Courtesy of the artist and Galerie Nagel Draxler, Berlin/Cologne
Many of the Stars Group artists left China to go abroad, and Gang was no exception. He moved first to the Hague and then to New York, where he lived for 24 years until moving back to Beijing in 2007.

Because of this background, both Eastern and Western influences show up in his work, giving Gang the sense of being both an outsider and an insider of each country. “He straddles both of those worlds, and in terms of his image-making, he kind of does the same thing,” Viveros-Fauné says.

Gang drew inspiration from European painters from the ‘80s and ‘90s, especially the German artist Martin Kippenberger, who often poked fun at the art establishment and sometimes embraced so-called bad art. “Some of the paint-handling is intended to look almost sloppy,” Viveros-Fauné says. “Gang is a guy who plays with that tradition quite a bit.”

However, much of his subject matter is also influenced by Chinese politics and stories from his personal past. The PAMM exhibit features 14 of Gang’s paintings, dating from 1997 to 2018. Though it’s far from an exhaustive retrospective, the show is a good way for those unfamiliar with Gang to get to know his work and history. For instance, because of their political views, the members of the Stars Group had a hard time finding places to exhibit their work in China, so they would often show in apartments in Beijing instead. To reference this, PAMM is re-creating a 130-square-foot “apartment” inside the gallery, where several of the paintings will be displayed. 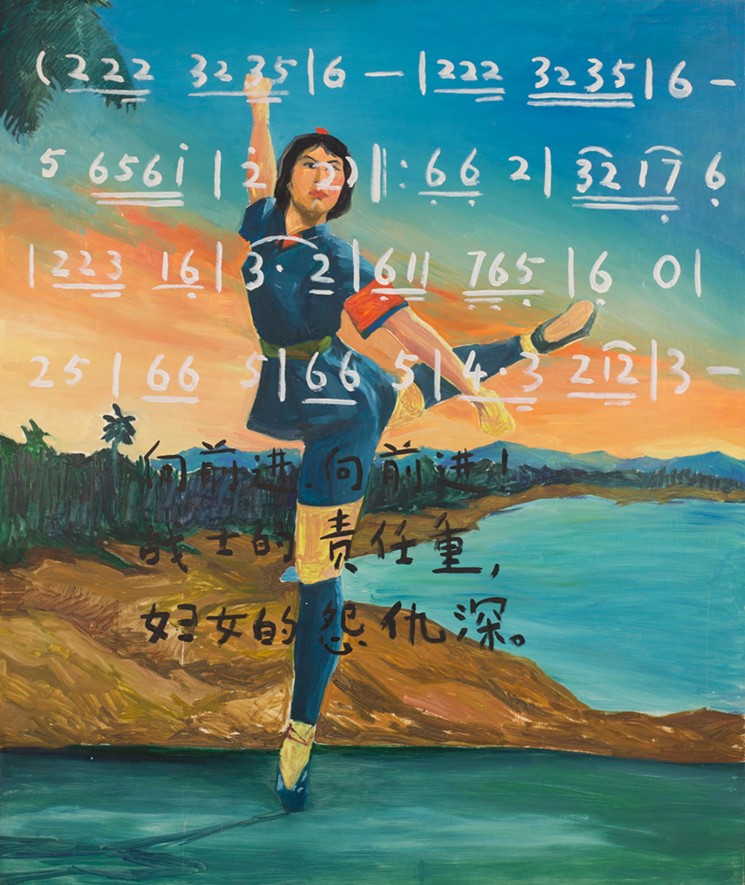 Zhao Gang's Revolution Ballet (2007).
Courtesy of the artist
Over the years, Gang “went through a number of transformations,” Viveros-Fauné says, “including quitting making art altogether and becoming a banker for a while.” The work on view at PAMM ranges from more abstract early paintings to pieces that Viveros-Fauné considers to be more “boundary-pushing.”

“There’s a way in which sometimes depicting actual things in the world is a more critical position,” he says. The largest work in the exhibit, a painting titled Cocksucker Blues, is named for a Robert Frank documentary about the Rolling Stones’ 1972 tour. Though the Stones commissioned it, they later tried to prevent the film from being distributed due to its many scenes involving drugs, sex, and general hedonism. (Currently, it can be shown in public only under limited circumstances.) For his part, Gang’s painting depicts 21 Chinese intellectuals who were targeted during the country’s Cultural Revolution under Mao Zedong.

“You show your heroes, and they’re really in an abject, if not deranged, state,” Viveros-Fauné says. “Part of what he’s trying to do is to set up an analogy between himself — not just himself but fellow intellectuals, painters, artists in China today — and the kind of luck that these guys had in the '50s and '60s.”

Another prominent painting, Revolution Ballet, depicts a woman from a piece of propaganda Gang saw when he was a child — a poster advertising a government-approved opera. “There weren’t a lot of images of women in the media in general in China,” Viveros-Fauné says. At that time, the featured woman was the closest thing Gang had to a celebrity crush, and it stuck with him.

To Viveros-Fauné, Gang’s multiculturalism — his refusal to fall neatly into one category — represents the future.

“There's a way in which he points to the kind of visual rescrambling we’re going to see a lot more of in the near future — being fully part of Chinese culture and American culture, and it not being an either/or situation,” he says.

"Zhao Gang: History Painting." Thursday, May 24, through January 5, 2020, at Pérez Art Museum Miami, 1103 Biscayne Blvd., Miami; 305 375 3000; pamm.org. Admission costs $16; discounts are available for members, students, children, seniors, and active U.S. military.
KEEP MIAMI NEW TIMES FREE... Since we started Miami New Times, it has been defined as the free, independent voice of Miami, and we'd like to keep it that way. With local media under siege, it's more important than ever for us to rally support behind funding our local journalism. You can help by participating in our "I Support" program, allowing us to keep offering readers access to our incisive coverage of local news, food and culture with no paywalls.
Make a one-time donation today for as little as $1.