Outshine Film Festival 2019: What to See and What to Skip

Wild Nights With Emily. Biopics typically choose to maintain the popular image of their subject, one that's usually a toned-down version of reality. Madeleine Olnek's Wild Nights With Emily, on the other hand, upends traditional ideas of Emily Dickinson. Where there was once misery, there is now joy mixed with morbidity. Where there was nothing but a recluse, there is now a woman who loved deeply — and who loved many things in life even though she frequently didn't want to live.

Olnek splits the tale of Emily Dickinson, and her sister-in-law and lover Susan Huntington Gilbert Dickinson, into three parts, separated by decade. In the 1840s, Dana Melanie and Sasha Frovola portray young versions of the two, a beautifully naive pair who get to simply exist and love each other. The 1860s feature Molly Shannon and Susan Ziegler as the couple, navigating everything from marriage and separation to work and trying to get published. The 1880s feature Amy Seimetz as Mabel Todd, a woman having an affair with Dickinson's brother who would publish Emily's poetry posthumously and rewrite her history as well as her work.

By cutting between these periods, Wild Nights With Emily places emphasis on queer erasure and the way the truth is often stretched to fit societal norms and sell copies. To watch Shannon and Ziegler interact is a pleasure: Both actresses deliver a range of emotions, from humor to grief, and nothing is as amusing as seeing Seimetz take someone's words and twist them into something scandalous.

It's clear Olnek is as fascinated with the relationship between Emily and Susan as she is with them as individuals; the way she stages their romance is riveting. This isn't a film that solely wants to show Dickinson's wit through literary humor (though it does so expertly) or only seeks to emphasize that she was misunderstood and her writing was ahead of its time. A scene as simple as falling into bed on top of coats and kissing is as important as watching Susan grieve at the loss of her lover.

Best of all are the seemingly endlessly unique ways that Olnek brings Dickinson's words to life: an actor reciting lines as though in a stage play, an overlaying of Dickinson's handwriting over scenes that feel like home videos, and in fantasy sequences that place subtitles onscreen to visualize the poetry. Every moment of Wild Nights With Emily screams a true love for the poet. But more important, the film demonstrates a genuine interest in understanding her beyond her seemingly tragic life. 7 p.m. Sunday, April 21, at Regal South Beach, 1120 Lincoln Rd., Miami Beach; regmovies.com. Tickets cost $13 via mifofilm.com.

Sister Aimee
Kill Claudio Productions
Sister Aimee. "This film is based on events in the life of famous evangelist and show woman Sister Aimee Semple McPherson," a title card at the top of Sister Aimee declares, just before adding a caveat: "5½ percent is truth. The rest is imagination."

And so Samantha Buck and Marie Schlingmann's Sister Aimee begins its story about America's most famous evangelist. Sister Aimee (Anna Margaret Hollyman) wanted to get away from her job and head off to Mexico with her lover Kenny (Michael Mosley) and their mysterious guide to getting there, Rey (Andrea Suarez Paz). The narrative shifts between the ridiculous and the bland, the camp and the straight-faced, never quite knowing what tone to strike for a story that's admittedly absurd.

McPherson herself was a woman who sold a story, a natural charismatic force that skyrocketed her to fame with her elaborate healings and stage shows. Anna Margaret Hollyman is a treasure in the role, giving depth to the woman when she's off stage as well as on. The issue is that the script doesn't have as much interest in that duality as it should, less interested in exploring her singularly than it is in tossing its three characters into situations we've seen time and time again. Interviews with a wide cast of side characters, all of whom are tangentially linked to Aimee, are an interesting concept that isn't seen through to the end.

Sister Aimee hits its highs when it allows Hollyman to embrace the Harold Hill of it all, dragging everyone around her into believing her stories by sheer performance. These high energy situations, including a musical number that feels ripped out of Joel and Ethan Coen's idea drawer, are an absolute joy. It's just a shame the film can't channel that vibrant energy throughout its entire run. 7 p.m. Monday, April 22 at the Regal South Beach, 1120 Lincoln Rd., Miami Beach; regmovies.com. Tickets cost $13 via mifofilm.com.

Dykes! Camera! Action! Directed by Caroline Berler, this is a documentary made for people who want to listen to the likes of Barbara Hammer, B Ruby Rich, Su Friedrich, Cheryl Dunye, Lisa Cholodenko, and Desiree Akhavan (among many others) discuss their work and the work of other queer women who helped change the face of lesbian cinema. It's chock full of lesbian film scenes—selections from Personal Best, High Art, Dyketactics, Je Tu Il Elle, The Watermelon Woman, Damned If You Don't, High Art, and dozens more. Together, the clips and interviews explain how these films and filmmakers were developing and existing outside of traditional cinema. As Hammer says of first realizing people wanted to see these movies, "There is definitely a need for my cinema. I am going forward with this."

Historians, critics, and filmmakers alike navigate the evolution of lesbian appeal, from early literature that explored sexuality, to the depraved and dead lesbians of The Children's Hour and The Killing of Sister George, to the experimental works of Friedrich, Hammer, and Borden, to the mainstream world of The L Word and beyond. The film skews into the experimental, reflecting the way lesbian cinema was birthed. As one expert notes, "conventional narrative was the structure of heterosexual life," so there was no better way to challenge that than creating unconventional art.

The film does have its fun moments, allowing the queer women on screen to erupt with joy at describing certain scenes or moments in their histories. The absence of the seminal lesbian film Bound, though, is stunning, especially considering other popular films like Desert Hearts, The Hunger, The Hours, and Carol are discussed. It begs the question of why it was left out, especially as a lesbian film of note that was directed by two trans women.

But that question exists as subtext in a film that efficiently showcases how a number of queer women were interested in making text. It would be the perfect starter dish to any lesbian cinema class syllabus' main course, an introduction to a world of lesbian cinema that was as bold and unique in its creation as it was deeply interested in representation. 12:15 p.m. Saturday, April 20 at the Regal South Beach, 1120 Lincoln Rd., Miami Beach; regmovies.com. Tickets cost $13 via mifofilm.com. 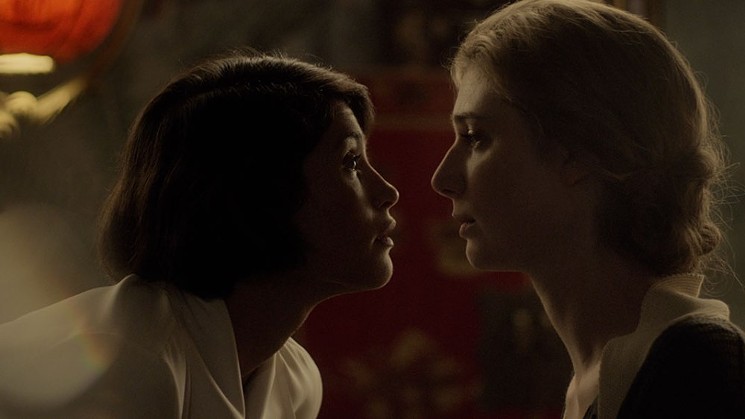 Vita & Virginia
Protagonist Pictures
Vita & Virginia. Virginia Woolf was a master of storytelling; it's nearly impossible not to be intoxicated by her work. In telling the story of Woolf and her relationship with the writer Vita Sackville-West, Chanya Button never quite grips the viewer in the same way. Though Sackville-West would serve as the inspiration for one of Woolf's most fascinating literary figures, the gender swapping Orlando, Vita & Virginia is oddly uninterested in many of the themes that the novel explores.

Instead, Button prefers to create a more traditional romance between the two women, one that fits within the safe comforts of a BBC TV movie. There's a kiss between women here, an odd fantasy sequence to dramatize Woolf's mental illness there, period appropriate costumes and sets everywhere, and a script that cares more about lazily highlighting what feminism and homosexuality was like in the 1920s than it cares about how these two women challenged femininity with their relationship and work. If any aspect of the film aims for a sense of modernity to complement the way Woolf and Sackville-West were ahead of their time, it's Isobel Waller-Bridge's score, an oddity that shifts between weepy strings and electro-pop music.

Elizabeth Debicki makes for an intriguing Woolf; it's impossible to take one's eyes off her. She brings nuance to a character who deserves it, but the film occasionally betrays her by having her act loudly against hallucinations that feel inappropriate. Gemma Arterton is the perfect exterior force to contrast Debicki's internal performance, as charismatic as always. It's a shame she doesn't get a chance to explore the way she challenged gender performance beyond some inane conversations with her husband, as the two seem perfect to explore androgyny in tune with the writing of Orlando.

Too often Button doesn't know how to make the words that playwright Eileen Atkins wrote pop on screen. Letter readings become just that: readings directly at the camera and close-ups of pages that are as boringly delivered as they are shot. But every so often, she captures magic between the two women. There's palpable chemistry between Woolf and Sackville-West in the film's more intimate moments: two women who admire each other in vastly different ways, one for her intellect and talent, the other for her experience and joy. Those few scenes where that intimacy is highlighted, with the two women getting the chance to simply exist with each other, are a treat in an otherwise lackluster and disappointingly standard biopic. 7:30 p.m. Saturday, April 20 at the Regal South Beach, 1120 Lincoln Rd., Miami Beach; regmovies.com. Tickets cost $13 via mifofilm.com.

Outshine Film Festival Miami. April 18-28 at various venues; mifofilm.com. Most screenings cost $13.
KEEP MIAMI NEW TIMES FREE... Since we started Miami New Times, it has been defined as the free, independent voice of Miami, and we'd like to keep it that way. With local media under siege, it's more important than ever for us to rally support behind funding our local journalism. You can help by participating in our "I Support" program, allowing us to keep offering readers access to our incisive coverage of local news, food and culture with no paywalls.
Make a one-time donation today for as little as $1.