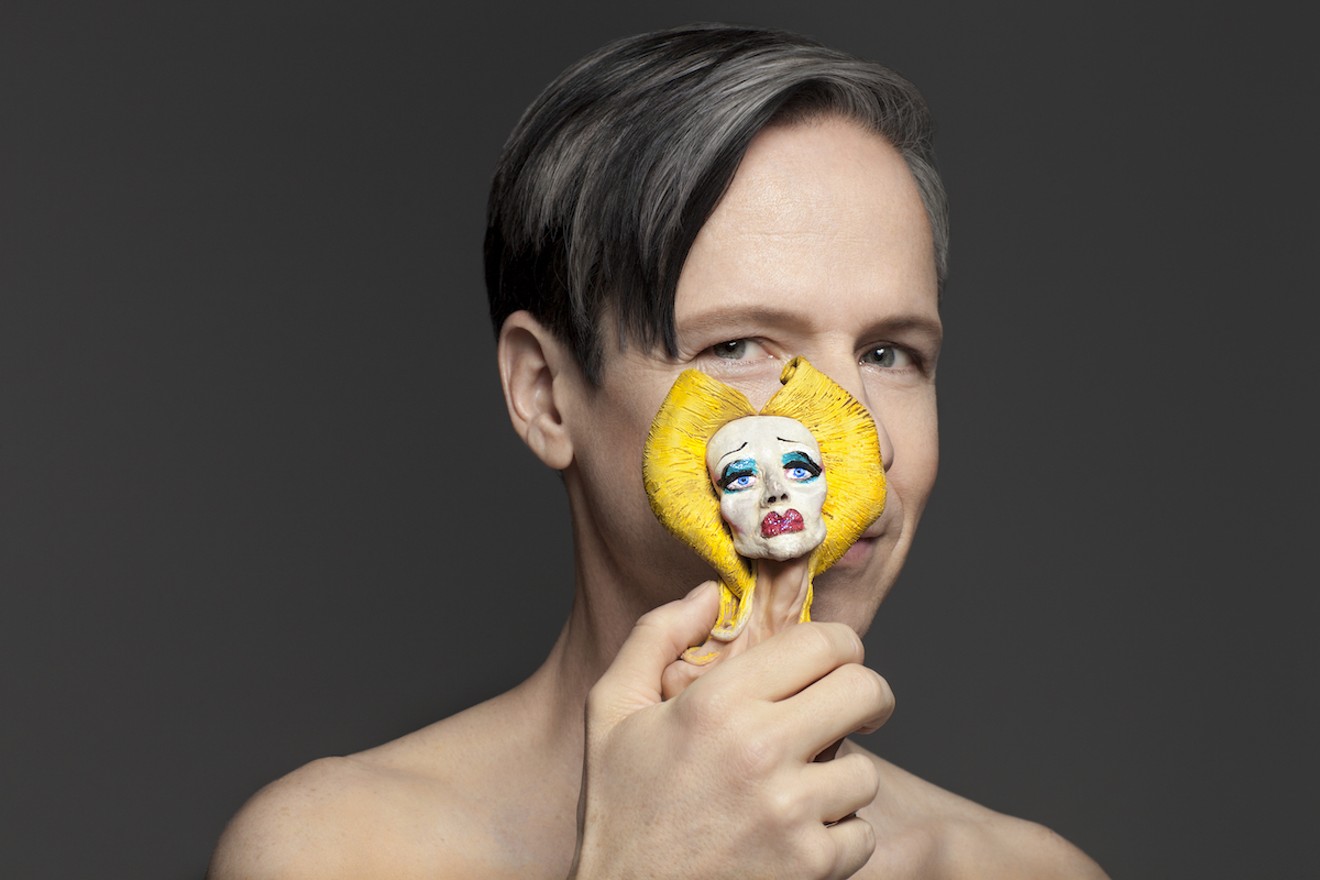 John Cameron Mitchell Photo by Matthew Placek
It's been more than two decades since Hedwig and the Angry Inch — the rock musical created by John Cameron Mitchell and Stephen Trask — opened off-Broadway. Since then, the show, featuring the fictional character Hedwig Robinson, a genderqueer East German singer in a rock band, has evolved into a feature film (directed by Mitchell as his debut), numerous stage productions including a Tony Award-winning Broadway revival, and now a concert.

But Mitchell's The Origin of Love: The Songs and Stories of Hedwig isn't exactly a reincarnation of the show. "I'm not really playing Hedwig," Mitchell explains to New Times. "I'm playing myself in a Hedwig costume telling the story of its origin, talking about the people involved, the philosophies involved, and just creating a real love fest with our fans."

"I think of Hedwig like the Constitution — it's a living document," he adds. "Other people can play it, they can adjust it, they can amend it, and I'm fine. I don't need to micromanage; I just don't want them to mess with the important text, but they can add things. There's even been versions with ten Hedwigs!"

The show, which has brought Mitchell "a great deal of a joy," he says, and always ends with him crowd-surfing in a seated venue, comes to Miami's Adrienne Arsht Center Saturday, June 8. But while he jokes that the venue is perhaps too large for him, he also muses that Miami has sometimes been bypassed as a cultural center.

"It's funny because there's always culture in Miami. There's a nexus of wonderful cultures, but it's always been denigrated as the kind of outpost or vacation spot. So the idea of art growing up there was a little bit, 'Why would you do that? This is just for fun,' and, of course, for the people who live there, it's not always fun," he says.

"The first time I went [to Miami], I was in a Michael Mann-produced action movie called Band of the Hand that was shot in Miami Beach before South Beach was a glamorous place," he reminisces. "It was a mixture of immigrants: The Jews would come down from the North, and the Latin Americans would be coming up from the South, and there were some rednecky whites in the middle, but it created an interesting melting pot, almost like a gold-rush town that would periodically be replenished."

Though The Origin of Love uses Hedwig's name in its title, the concert also includes a number of songs from outside of Hedwig and the Angry Inch. "I'll be breaking out my Spanish to sing a Cuban song," Mitchell says. "My favorite Cuban singer is Silvio Rodríguez, and he's kind of like the Nick Drake of Cuba. He has some of the revolutionary, man-with-a-guitar kind of simplicity, but the poetry, especially for my Spanish-speaking friends, is incredibly in the lyrics."

Mitchell will also introduce many audiences to a work of his they might not have heard yet: his musical podcast Anthem, which stars himself and performers such as Glenn Close, Patti LuPone, and Cynthia Erivo. As with all of his work, the podcast is queer in every way. Asked what draws him to creating these portraits of outsiders, he responds simply, "That's me. That's why."

He adds, "One of the advantages to being queer is that it makes you question any kind of received notions. The received notion of you being subhuman and not worthy of respect makes you go, 'Oh, maybe they got some other things wrong.' And it's a privilege to question everything, including gay orthodoxy, which can be just as conservative as straight and annoys me. I don't like being told what to do, especially without much thought, like if you're gay, you have to listen to this music or do such and such.

"Everyone is so complex, though the need to not be alone forces people into tribes and [into] believing certain tenets that they haven't thought about," he continues. "Think for yourself! Find your allies! Understand that no one is perfect but everyone is trying hard, and surround yourself with people who are trying to do the right thing even if they've come from a position of white privilege or queer trauma or whatever it is. We're trying to move out of what we were and into what we can be."

Mitchell's characters are, in a way, extensions of himself. "There's a sense of art being a way to unpack the past in order to find a way to make sense of things that have happened to you and in order to heal and correct trauma. Being marginalized allows you to feel empathy, and change only happens because of recovery from that," he explains.

"In Anthem, a character says, 'It's the unloved who change the world,' and that makes it hard. It makes those rebels appear a little bit insane and damaged, and they are. But they're choosing to fix things rather than destroy themselves and those around them. So all of the characters in my pieces are recovering in some way and trying not to be a victim, to get to the next stage. You have to acknowledge you're a victim when something happens to you and you have to move on, because if you hold that title forever, you're still controlled by the abuse. You've gotta talk about it; you've gotta go through it."

Dealing with trauma isn't limited to art, though, and Mitchell extends his criticisms to the real world. "I think America is going through it right now," he notes. "And when you can't do much about the regime above you, you tend to try to correct what you can correct. Sometimes people are in a rush to do so, and it can get messy; that's where you're seeing a lot of allies lashing out at each other, trying to find purity and correct the ills of history while Trump laughs in his tower and we tear each other apart."

But Mitchell chooses instead to end on an optimistic note: "If we're doing it correctly, we're getting stronger together instead of just canceling people. And that's my goal with my work: to foster empathy and restitution, learning and moving on."

John Cameron Mitchell's The Origin of Love: The Songs and Stories of Hedwig. With Amber Martin. 8 p.m. Saturday, June 8, at the Adrienne Arsht Center, 1300 Biscayne Blvd., Miami; arshtcenter.org. Tickets cost $35 to $99.
KEEP MIAMI NEW TIMES FREE... Since we started Miami New Times, it has been defined as the free, independent voice of Miami, and we'd like to keep it that way. With local media under siege, it's more important than ever for us to rally support behind funding our local journalism. You can help by participating in our "I Support" program, allowing us to keep offering readers access to our incisive coverage of local news, food and culture with no paywalls.
Make a one-time donation today for as little as $1.