Olujimi Dance Collective Explores the Cultural Side of Twerking

Just mentioning the dance style can set off a fierce debate.

While some may dismiss it as a booty-popping, hips-gyrating dance craze best relegated to the dance floor, for Michelle Grant-Murray, there is more to it than meets the eye.

The choreographer, educator, and artistic director of Olujimi Dance Collective will explore this and more through the lens of four performances at the Dennis C. Moss Cultural Arts Center in Cutler Bay. The event will be held from Friday, January 20, through Sunday, January 22.

"We'll have a live musician. We have some video elements, and we have some vocalization going on through the spoken word," Grant-Murray says.

Dancers will perform against the backdrop of something else that is known for movement: a train, she says.

"Four women all get on this train for different reasons, but they all have a connection through their stories," Grant-Murray explains. "What happens on the train is that they're time-hopping, so they're coming from different places and spaces in time. We're looking at culture, history, and philosophy over a time period in telling these four individual stories."

Grant-Murray says the presentation has evolved as part of a larger conversation she has been having on twerking. She tackled the topic in depth two years ago at a Black Artist Talk event at Deering Estate. The subject, she says, is worth exploring.

"It is a very deep conversation," Grant-Murray adds. "I've been thinking about this since 2014."

She recalls that at the time, she was seated on the porch of the Oloffson Hotel in Port-au-Prince, Haiti. Surrounding her was an eclectic group that included a historian, a life coach, and an artist (and a New Orleans second-line reveler) when the subject of twerking bubbled up as they belted out a string of gospel songs.

She realized that many see the dance style as hypersexual or even vulgar; she, on the other hand, sees a dancer. A dancer whose hips are steeped in tradition and whose pelvic thrusts answer the call of the Congo. 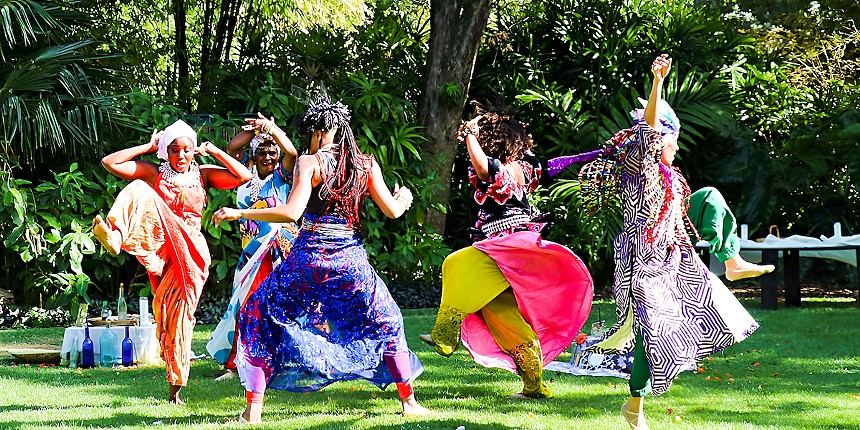 "[It's now on] Tik Tok and all the various social media, Instagram and so on, and it's something that people are doing in a flagrant way to use their sexuality and their body without realizing that historically, many of these dance patterns had a very specific meaning, Whether they were fertility dances or dances for agricultural purposes [or other] reasons, just shaking the body was not part of the intent."

Grant-Murray said that another opportunity allowed her the freedom to pursue the issue further.

"I'd already started to deconstruct the word T.W.E.R.K. [as] 'Transnational Dance Works and Practices that Evoke Revolutionary Kinship.' That was already a part of the conversation, deconstructing the word and what it actually looks like and how this movement, this practice, brings so many people together and so from that point, I was offered a residency at the South Miami-Dade Cultural Center, and I was like, This is perfect. I can work on T.W.E.R.K."

Her investigation eventually culminated in a series of programs that included a T.WE.R.K. summer dance intensive and collaborations with noted dancers and choreographers, including Dr. Yanique Hume, head of the cultural studies department at the University of the West Indies.

"We invited dance artists from different genres of the African diasporic movement form. So we had traditional West African, and we had something called Umfundalali dance technique, which is a fusion of African dance forms that come from the continent and that was created by [the late] Dr. Karimu Welsh, [an early scholar of African diaspora dance]."

With a wealth of knowledge under her belt, Grant-Murray views her latest event at the Dennis C. Moss Cultural Arts Center as the culmination and celebration of her previous work combined. It also serves as the perfect opportunity to leave her audience with a larger message.

Olujimi Dance Collective presents "T.W.E.R.K. (Transnational Dance Works and Practices that Evoke Revolutionary Kinship)." 8:30 p.m. Friday, January 20, 3:30 and 8:30 p.m. Saturday, January 21, and 3:30 p.m. Sunday, January 22, at the Dennis C. Moss Cultural Arts Center, 10950 SW 211 St., Cutler Bay; 786-573-5300; mosscenter.org. Tickets cost $35.
KEEP MIAMI NEW TIMES FREE... Since we started Miami New Times, it has been defined as the free, independent voice of Miami, and we'd like to keep it that way. With local media under siege, it's more important than ever for us to rally support behind funding our local journalism. You can help by participating in our "I Support" program, allowing us to keep offering readers access to our incisive coverage of local news, food and culture with no paywalls.
Make a one-time donation today for as little as $1.
ArtburstMiami.com is a nonprofit source of theater, dance, visual arts, music, and performing arts news.