Choose from film screenings, tailgates, and concerts this weekend. Photo by Karli Evans
Backstreet's back, alright! Everyone's favorite boy band (unless you're an 'N Sync person) plays South Florida this Friday. And on the subject of being back, college football returns Saturday with the UF vs. UM showdown. If you couldn't snag a ticket to the game in Orlando, head to the massive tailgate at Arkadia Day Club. There are also a couple of cool movie showings this Saturday: Moonlight will be screened on a giant billboard, and the classic Jackie Brown will hit Coral Gables Art Cinema for one night.

Here are the best things to do in Miami this weekend:

Most nights, you can catch stellar shows at the Fillmore. But this Friday evening, experience a rad '70s dance party. For Fillmore Flashback Fridays, the venue's lobby will be transformed into Studio 54. To complement the retro vibes, there will be neon signs, jams by DJ Fantasma, drink specials, and a photo booth to capture those retro looks. 9 p.m. Friday at the Fillmore Miami Beach, 1700 Washington Ave., Miami Beach; fillmoremb.com. Admission is free.

Relive your childhood when BSB plays the BB&T.
Photo by Dennis Leupold
Backstreet's back, alright! Everyone's favorite (or maybe second favorite) boy band is on tour: Backstreet Boys will hit he BB&T Center this Friday. For this whirl around the globe, it's the DNA World Tour, named for the group's ninth studio album, which dropped in January. In addition to the newbies, count on classics such as "The Call," "Larger Than Life," and "The One." 8 p.m. Friday at BB&T Center, 1 Panther Pkwy., Sunrise; ticketmaster.com. Tickets are sold out.

As global as its name sounds, Khruangbin delivers a truly global sound. Spanning psychedelic-rock goodness to Middle East-inspired jams, this Texas trio is becoming a worldwide phenomenon. To better understand its vibe, listen to the 2018 LP Con Todo el Mundo. This Friday at the Ground, the band's Laura Lee and Mark Speer will perform an intimate DJ set. 11 p.m. Friday at the Ground, 34 NE 11th St., Miami; thegroundmiami.com. Tickets are sold out.

A tribute to the Smiths and Morrissey? Swoon. That's what Ordinary Boys bring to every single show, so get ready for hits overload, including "This Charming Man," "There Is a Light," and "Irish Blood, English Heart." In 2010 at Churchill's Pub, the Florida-bred group performed its first-ever show. Since then, it's become a statewide favorite and will celebrate ten years of retro rocking next year. 9 p.m. Friday at Gramps, 176 NW 24th St., Miami; gramps.com. Admission is free. 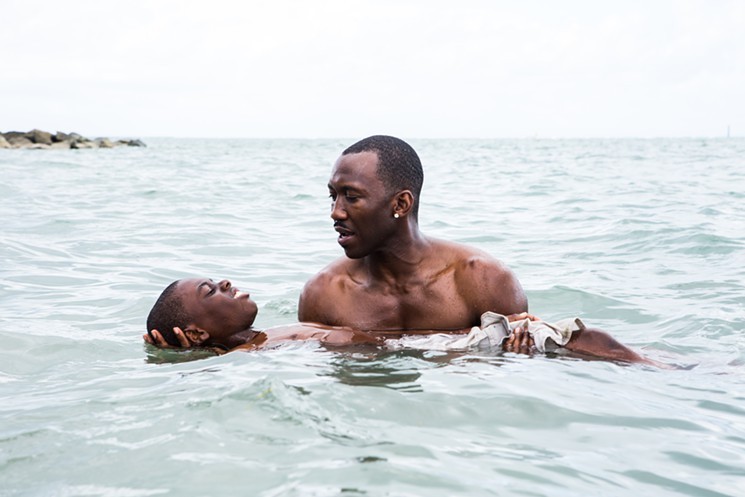 Watch the modern classic Moonlight on a giant billboard Saturday night.
Courtesy of A24
Saturday, August 24

Some people make songwriting look easy. In that blessed crowd is the award-winning singer-songwriter Jim Camacho. He has taken his talents to a new level with his web series, Adventures in Songwriting, in which he interviews fellow songwriters (such as Fernando Perdomo and Deaf Poets) and creates a new song with them each episode. This Saturday in South Miami, Camacho and crew will celebrate the new series (and an accompanying EP). 8 p.m. Saturday at Madelstam Theater, 8530 SW 57th Ave., South Miami; adventuresinsongwriting.net. Tickets cost $20 to $30.

Vampire Weekend returns to Miami Saturday night.
Photo by Ross Stewart
Usually, it's not a good thing when a vampire comes to town. But in the case of Vampire Weekend, Miami wishes the band could stay forever. The NYC-bred indie-rock act is set to hit the Knight Center this Saturday night on its Father of the Bride Tour. The tour bears the same name as the band's latest LP, which dropped in May and reached number one on the Billboard 200, just like Vampire Weekend's previous two albums. 7:30 p.m. Saturday at James L. Knight Center, 400 SE Second Ave., Miami; jlkc.com. Tickets cost $47.50 to $99.50.

El Perreo was named New Times' Best Party in 2019 — and rightfully so. This is a superexclusive reggaeton-dominated shindig that's always a quirky blast. For one fiesta, guests had to register on a website that looked like a college application portal. Regardless of how wild or different each one of these parties may be, get ready to shake that booty. 10 p.m. Saturday at 1306 Miami, 1306 N. Miami Ave., Miami. Admission is free with RSVP via splashthat.com or $10 at the door.

In this complicated world, sometimes it's nice to calm down and focus on the simple things. Enter Classic Album Sundays, a collaboration between Déjà Vu Audio South and Sweat Records, giving folks an intimate and audio-driven opportunity to hear beloved albums like never before. At 6 p.m. sharp, the spot will play Interpol's iconic 2002 debut, Turn On the Bright Lights, so don't be late. 6 p.m. Sunday at Déjà Vu Audio South, 120 NW 25th St., Loft 302, Miami. Tickets cost $10 via eventbrite.com.

Your film will come with a side of history this Sunday. As part of its collaboration with Wolfsonian-FIU, Miami Beach Cinematheque will host another Lights, Camera, Deco. Begin with a tour of the exhibit "Deco: Luxury to Mass Market"; then catch the timeless 1936 sci-fi flick Things to Come in the theater. If you don't leave entertained, that's your fault. 4 to 7 p.m. Sunday at Miami Beach Cinematheque, 1130 Washington Ave., Miami Beach; miamibeachfilmsociety.memberlodge.org. Tickets cost $11.

Just because you have to work Monday doesn't mean your Sunday has to be a snooze-fest. Every month, Eazy Pool Party goes down at Broken Shaker at Freehand Miami. Hosted by Eva Taiibi and with tunes by Spinser Tracy, this six-hour spectacle boasts dance-worthy jams, ice-cold beverages, and plenty of opportunities to get wet and get down before the workweek begins. 3 to 9 p.m. Sunday at Broken Shaker at Freehand Miami, 2727 Indian Creek Dr., Miami Beach. Admission is free; RSVP via eventbrite.com.
KEEP MIAMI NEW TIMES FREE... Since we started Miami New Times, it has been defined as the free, independent voice of Miami, and we'd like to keep it that way. With local media under siege, it's more important than ever for us to rally support behind funding our local journalism. You can help by participating in our "I Support" program, allowing us to keep offering readers access to our incisive coverage of local news, food and culture with no paywalls.
Make a one-time donation today for as little as $1.