The Bearded Ladies Cabaret Courtesy of Miami Light Project
In an age when we are tethered to our screens and gadgets, and emojis supplant real emotion, we can easily lose touch with the elements that make us human. Explorations of technology and control are at the heart of Marlene and the Machine, a cabaret performance by the Bearded Ladies Cabaret, coming to the Light Box this Thursday through Saturday.

Based in Philadelphia, the performance troupe — with some members who are neither bearded nor identify as ladies — consists of four core players and some intimate “bearded extensions,” says John Jarboe, founding artistic director. He also plays the show’s femme fatale, Marlene, based on the sultry star of classic Hollywood, Marlene Dietrich.

“We like taking nostalgia and turning it on its head. We are more than a company that does drag. We’re experimental cabaret, aggressively nonbinary... [a] gender fuck.”

Fleeing “bad musical theater and bad Shakespeare” after graduation from the University of Michigan, Jarboe formed the company in 2010. Meant to be a combo of theater and deceptively light cabaret, a hybrid he calls “cabaplay,” its shows address pop culture, gender, and political issues through humor and song.

“We want people to think critically about how [they] are using their technology, how it affects or changes their humanity. We also love people to leave the theater humming and dancing.”

The team’s past productions include Andy: A Popera, a Warhol-inspired show performed in collaboration with Opera Philadelphia, and Color Me Bearded, a Barbra Streisand homage performed in the Philadelphia Art Museum. 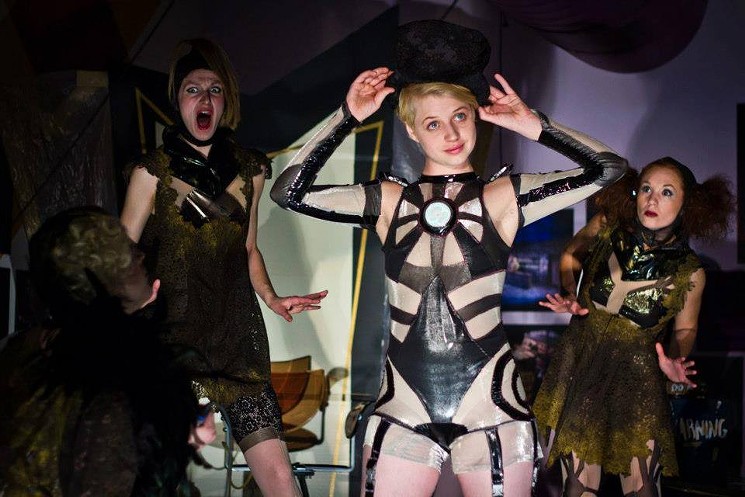 Courtesy of Miami Light Project
German expressionism meets the iPhone in the Bearded’s latest touring piece. Performed in New York and Philadelphia earlier this year, Marlene and the Machine will be mounted in Miami for the first time thanks to funding from the Knight Foundation.

Set in a not-too-distant future dystopia of cardboard cityscapes, the show stars the sex-positive German screen idol Dietrich, teaching workshops on emotional control. Centering the story on Dietrich made sense to Jarboe, who says her focus on controlling her own image, along with her gender fluidity, makes her a precursor to the millennial obsession with self-promotion.

The production has an eclectic score, directed by Heath Allen, which segues from the music of the Weimar Republic to Miami’s New Deco Ensemble, Regina Spektor, and Fiona Apple.

But there's more to this performance than sex and spooks. Jarboe believes maintaining traditions of cabaret and live theater has become increasingly urgent as we have become dependent upon and obsess over our tech.

“It’s radical to do work that is live and insistent on its liveness... Getting a bunch of people in the room and making them see each other... creates an environment of accountability.”