LaceClips took over Remy Workouts in Miami with a star-studded cast, including Monique Billings, CJ McCollum, Errick McCollum, Mikey Williams, Andre Drummond, and Fred VanVleet. These athletes were all in attendance to gather content for the latest and most versatile active wearable tech on the market, LaceClips.

World Premiere of Birds of Paradise at the Adrienne Arsht Center

The Adrienne Arsht Center recently announced the world premiere of Birds of Paradise, a series of dance-based queer solo portraits and an ensemble piece that explores the themes of agency, survival and transformation. The new work features interwoven filmed and live dance performances and runs from September 16-19.

Grand Opening of "Ahol Sniffs Glue: On Location" at Museum of Graffiti Beachside at the Confidante Miami Beach

The Confidante Miami Beach, in partnership with Wynwood’s Museum of Graffiti, welcomed Cuban-American graffiti artist Ahol Sniffs Glue (AKA David Anasagasti) as the newest featured artist at the Museum of Graffiti Beachside. 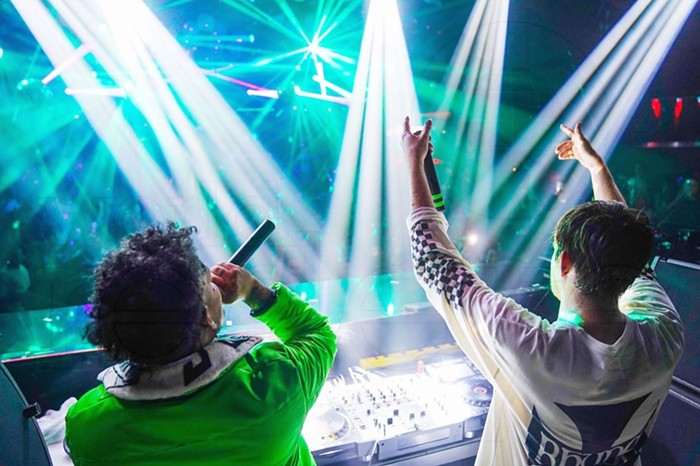 Nghtmre and Smokepurpp at Story Fridays

Friday night at Story was one to remember. Nghtmre took control over the decks for an insane set and even brought out Smokepurpp for a special guest performance that blew everyone away.

On Saturday night, Kaskade had all eyes on him when he returned to the one and only LIV for a special evening filled with great vibes and amazing music.

Dirty South at Haus of Hyde at Hyde Beach

Dirty South brought all the house vibes to Hyde Beach on Friday night when he took over the decks for an amazing late-night set.

On Set with Producer Soul Marley at WG Studios

From the family of world-renowned Reggae pioneers, the Marley’s, producer Soul Marley was on set with stylist Kimberly Sussman shooting his publicity portrait shots for some exciting upcoming music buzz.

Jorge Masvidal at Kiki on the River Sundays

Kiki on the River was on fire Sunday night as Miami’s elite crowd headed to the riverside hotspot to party alongside 305’s own UFC champion, Jorge Masvidal.

My Boyfriend Is Out of Town at Bâoli Miami

No boyfriend? No problem. Bâoli threw one of the city's hottest Wednesday night dinner parties where the ladies let loose and partied the night away, boyfriend-free.

Partygoers at Villa Azur enjoyed a beautiful evening under the stars on Thursday night, as they got a headstart to the weekend with endless bottle parades, music, and lots of dancing.

Dinner on the Deck at Strawberry Moon

On Thursday night, guests gathered on Strawberry Moon‘s outdoor deck for its monthly dinner series in celebration of the full moon.

The weekend festivities kicked off early at Mynt on Thursday night as guests headed to the South Beach hotspot for a late-night party session.

Swan was lit up with a sea of sparklers on Monday night as guests celebrated the start of a new week by partying it up at one of Miami’s hottest restaurants.

Guests at Negroni Midtown got their late-night groove on Tuesday evening as they drank and danced their worries away to tunes by DJ Manu Desrets.
KEEP MIAMI NEW TIMES FREE... Since we started Miami New Times, it has been defined as the free, independent voice of Miami, and we'd like to keep it that way. With local media under siege, it's more important than ever for us to rally support behind funding our local journalism. You can help by participating in our "I Support" program, allowing us to keep offering readers access to our incisive coverage of local news, food and culture with no paywalls.
Make a one-time donation today for as little as $1.