Mira Lehr, the Godmother of Miami's Arts Scene, Is on Fire 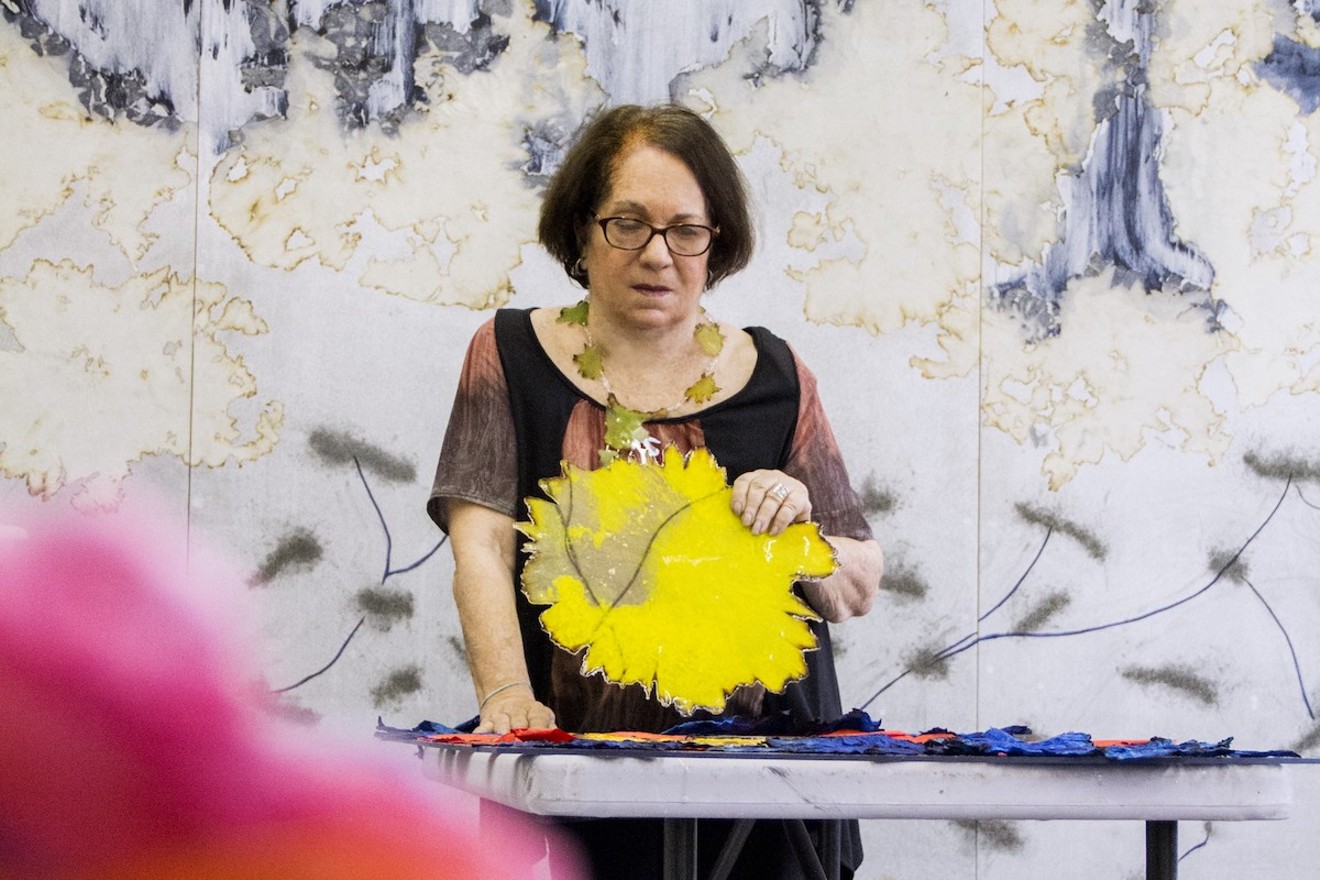 Mira Lehr in her Miami Beach studio Photo by Michael E. Fryd
To many, she is the godmother of Miami’s arts scene.

Trailblazing eco-feminist artist Mira Lehr has dramatically shaped the creative landscape, clearing a path for those who are up and coming. Her work has been showcased by notable art institutions and squirreled away by private collectors.

She’s now in her late 80s — and the honors don’t stop coming. Just last year, she was part of the Visiting Artist Residency program at the University of Central Florida’s Flying Horse Editions studio, and her resulting artwork debuted during Art Basel 2021. And this spring, Milan-based publisher Skira Editore is expected to release an homage to her life and career entitled Mira Lehr: Arc of Nature — The Complete Monograph.

Lehr is a firm believer that this is no time to slow down.

“I love being an artist. It gives me a great sense of creation,” she says. “I don’t know why, but it almost feels like you’re a little mini-god.”

“I had those beautiful boxes of Crayola crayons and, when they were brand-new, they came with these wonderful points on them,” says Lehr. “I hated to mess up the points, but I loved working with my Crayola.”

She realized she was good, she says, because “in school, the teachers always used to choose my drawings to hang on the board.”

She nurtured her craft and, by the 1950s, had her finger on the pulse of New York’s art scene. She studied with the likes of James Brooks, Robert Motherwell, Ludwig Sander, and married couple Nieves and James Billmyer. (“She’s more abstract expressionist, he is more geometric,” she says.)

Installation image of Mira Lehr’s painting, Pandora’s Blossoms, at Miami’s Deering Estate
Photo by Zachary Balber
Through the Billmyers, she was able to tap into a wealth of information, most notably from renowned modernist Hans Hofmann.

“The [Billmyers] worked a very long time with Hans Hofmann, so a lot of my knowledge came almost directly from him. I was lucky,” she says.

Then, in 1960, she moved to Miami, where she faced new opportunities but also encountered resistance.

“I experienced a lot of negative energy about being a woman. When I started out, women were not recognized. If you were married and had children and lived in Florida, you would definitely be considered a dilettante,” says Lehr, who raised four children in Miami. “To be taken seriously was very, very difficult.”

She also had to deal with the dearth of a Miami arts scene, but she fought back. In her first year, she created one of the first co-ops for women artists in the country and encouraged New York-based artists to come down to Miami to lead workshops.

“Used to be New York was it. If you didn’t make it in New York, forget it,” Lehr says. “But it’s changed now, Miami has a very big arts scene.”

Those who admire Lehr’s work know that she’s had a lot to do with that — and are thrilled that she has persevered.

“I am a huge fan of hers and have been for a long time now,” says Melissa Diaz, cultural arts curator at Miami’s Deering Estate, which hosted a nature-inspired solo exhibition highlighting Lehr’s work in October 2021. Titled “Regenerative Rhythms,” it included pieces created during the COVID-19 pandemic, such as Pandora’s Blossoms and Emerging from the Field of Reeds.

“I really want to underscore how important Mira is as an individual in creating the Miami arts community,” says Diaz. “We often get lost in the Art Basel of it all, and that, of course, has really helped us to build and to grow. But Mira is truly a pioneer and really an icon of the South Florida arts community.”

Not to mention Lehr’s impact on women artists. 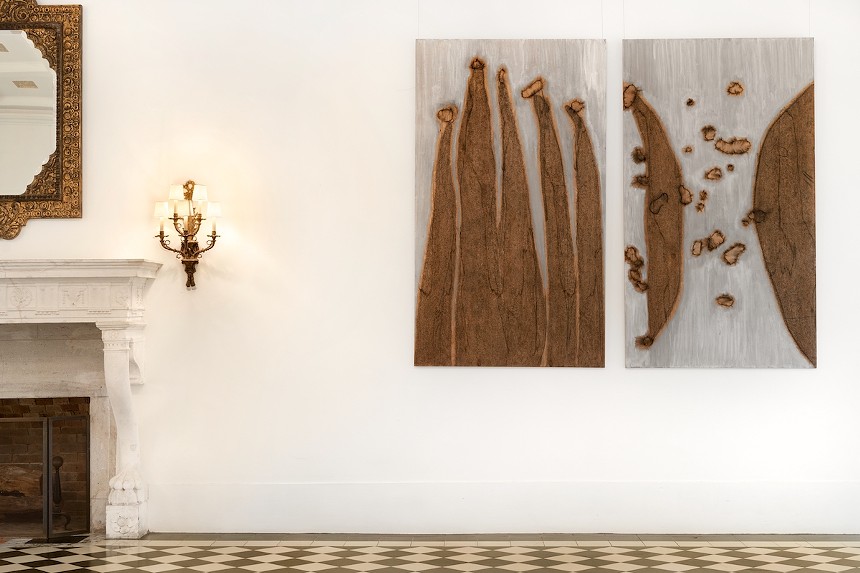 Installation image of Mira Lehr’s Emerging from the Field of Reeds at Miami’s Deering Estate
Photo by Zachary Balber
“Mira has made space for other female artists by being persistent,” Diaz adds. “Seeing her name out there, especially in the world of abstraction, which was so male-dominated, and pushing her way in and leaning in and creating space for herself, also helps to make space for other female artists who then can get in through the door that she’s created for them.”

This door has also allowed Lehr a platform to discuss the issues and explore the techniques she holds near and dear to her heart.

Large-scale installations such as her Mangrove Labyrinth offer fierce commentary on issues affecting the planet. Diaz says pieces like this one demonstrate how Lehr’s work continuously offers a new perspective.

“Every time I view these works, I see something new,” Diaz says. “There’s a new texture. There’s a new layer. There’s something that emerges or comes through to the surface that speaks to me, and so there’s never, ever a feeling that I have mastered each work.”

Diaz has observed how Lehr’s novel approach also extends to her technique.

“Mira is very relevant because she opens herself up to new ideas, new practices, and experimentation,” Diaz says. “I really love her embrace of fire and gunpowder and burning as contemporary art practices. That’s a technique that is very risky. It’s dangerous, and there is a good chance that the entire thing will just go up in flames.

“So the fact that she embraces this kind of chaos and this potential for violence or destruction in her work is really great,” she adds. “I think it keeps her in line with other younger contemporary artists because she’s constantly pushing herself to try new things and she hasn’t stayed within the limitations of one specific style or practice.”

On her path, Lehr continues inspiring the next generation of artists. She mourns the shift of producing artwork for commercial purposes and ultimately hopes artists will remain faithful to their craft.

“Do your work with confidence, love, and integrity,” she says. “Work from your heart."

– Sergy Odiduro, ArtburstMiami.com
KEEP MIAMI NEW TIMES FREE... Since we started Miami New Times, it has been defined as the free, independent voice of Miami, and we'd like to keep it that way. With local media under siege, it's more important than ever for us to rally support behind funding our local journalism. You can help by participating in our "I Support" program, allowing us to keep offering readers access to our incisive coverage of local news, food and culture with no paywalls.
Make a one-time donation today for as little as $1.
ArtburstMiami.com is a nonprofit source of theater, dance, visual arts, music, and performing arts news.