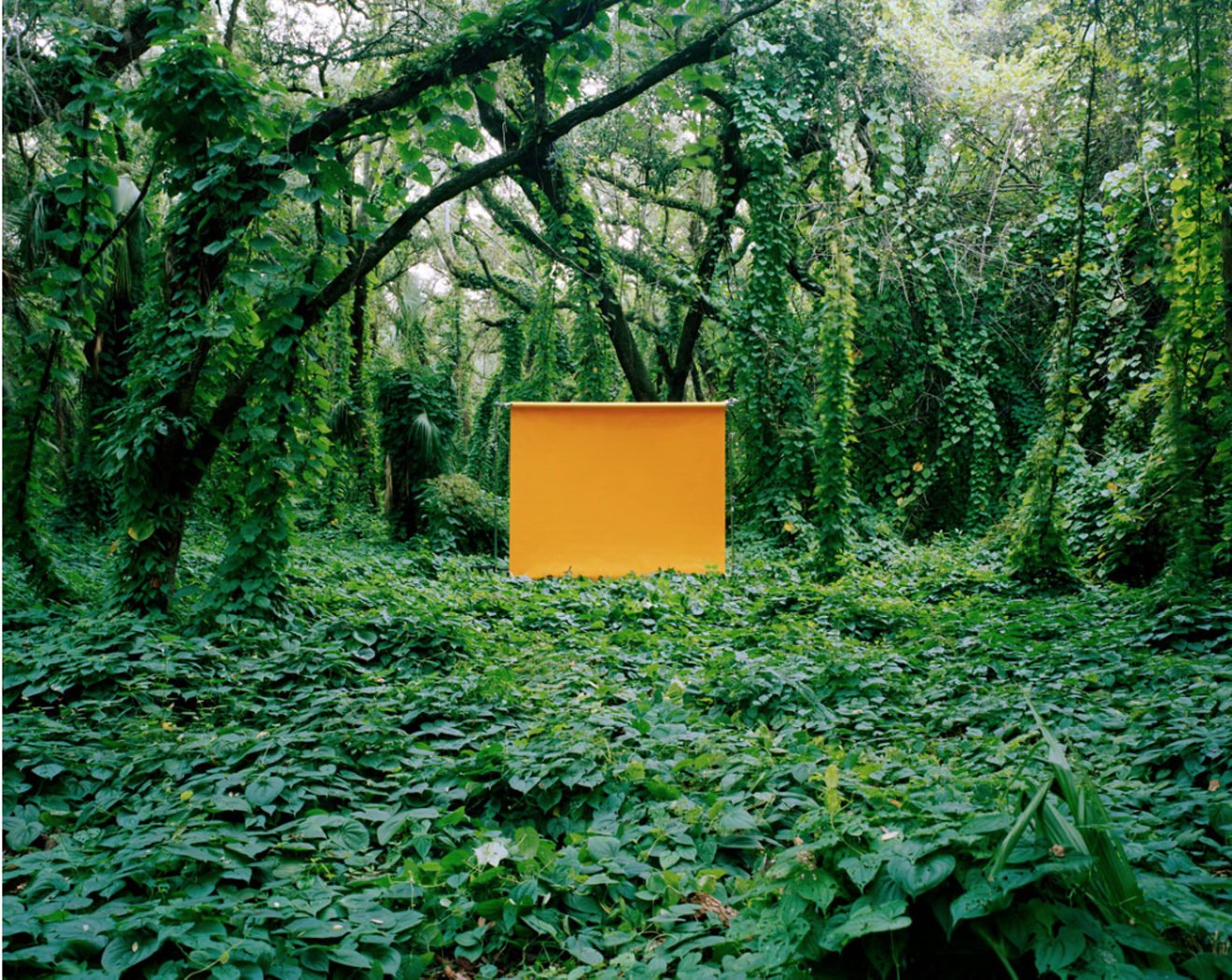 Transcend #11 is currently part of the permanent collection at Miami International Airport. Photo by Ian Patrick O'Connor
As the sounds of thunder grew closer and louder, photographer Ian Patrick O'Connor knew he needed to find shelter — for himself and his camera equipment. He was standing in the middle of a garden holding a metal C-stand as lightning filled the sky. Dropping the metal pole, he bolted for his car. The rest of the gear could wait until the rain subsided.

Standing in his Miami Beach apartment, O'Connor laughs as he recounts the moment. "There's a story behind every shot," he says with a smile.

The result of that wet endeavor is a stunning image of a large paper backdrop in a burnt gold color surrounded by fresh green foliage. The image, Transcend #11, is part of the photographer's "Transcend" series, , which was recently acquired as part of Miami International Airport's permanent collection.

O'Connor has been working on the series since 2017. He photographs these images just about anywhere — from California to the Everglades to Puerto Rico. Part of their beauty is their timeless nature. It's nearly impossible to tell when or where the images were taken.

The inspiration for "Transcend" came about after reading a book by Japanese scientist Masaru Emoto, The Hidden Messages in Water. Emoto would play polarizing sounds while freezing water, such as Mozart or a speech by Adolf Hitler, and then photograph the frozen form. He found that the crystallized state of the water that froze while Mozart was playing took on a beautiful form, whereas the water that had to endure words by Hitler came out deformed.

This left an impression on O'Connor, who thought, If matter takes on energies, what if you could do that with photography and a landscape?

Each photograph in the series requires the same set of effort. First, it's scouting and finding the right location; then it's selecting the right colored paper backdrop, followed by gathering up the C-stands and sandbags and making his way back to the spot. Plus, the lighting needs to be just right.

O'Connor places the colored paper backdrop in the same part of the frame for every image in the "Transcend" series.
Photo by Ian Patrick O'Connor
"It's a very thought out and intentional series," O'Connor says.

Part of the intention, he adds, is capturing the images on film. He uses a large-format film camera that involves a sturdy tripod setup with a hood for him to crouch underneath.

When people view his work, O'Connor wants them to have a sense of pause — a moment of meditation. The colored paper backdrop is placed precisely within the frame to draw your eye. Surrounding the colored square can be any natural scenery meant to represent your busy thoughts. The center is your meditation.

Still standing in his home office, O'Connor points to a set of photographs on the wall, one of which is the second image he ever shot as part of the "Transcend" series. It's a powder-blue square sitting on top of a flat rock somewhere in Joshua Tree National Park. He stares at the work and pauses before letting out a deep exhale.

"When I hit that one, I thought to myself, this is what I need to replicate," he says.

Although O'Connor has been photographing work for "Transcend" for years now, he's not entirely done with the series. "I envision a huge wall with 49 images — a big grid of seven by seven. I've made 31 images so far, but there's only about 20 that I would show."

He recounts the early days of his career and falling in love with photography at a skatepark. As a teen, O'Connor would spend weekends driving from his home in Key Largo to Miami to skateboard with friends. By age 15, he knew he wanted to be a photographer and worked to hone his skill. In his early 20s, he began his career as a professional skateboard photographer for a handful of magazines. In 2010, he moved to Chile, finding himself without steady work due to the recession.

After closing the chapter on being a professional skateboard photographer, O'Connor admits he was at a loss and fell into a depressive state. "It took me a while to figure out what I wanted to photograph and why."

Venturing out into the city of Santiago, he started seeing things he wanted to photograph and soon found solace through the craft. Using a Pentax 67 camera, he began to capture images of old buses.

The photographer hopes the viewer experiences a moment of pause with his works.
Photo by Ian Patrick O'Connor
"It pulled me out of a hole, for sure," he adds, "and it's when I discovered using photography as an artistic outlet."

Whereas his skateboarding work saw him more as a documentarian, with this new body of work, he was transitioning to an artist with intention. In 2015, he moved back to Miami and focused on his photography.

O'Connor is working on a new series of images titled "Perspective." This series was inspired not by a Japanese scientist but rather by another scientist by the name of Albert Einstein. While doing homework with his kids, he was reintroduced to the theory of relativity, and a lightbulb illuminated his mind.

"Everyone is essentially a product of their perspective," he says.

The "Perspective" series is still in development, and though he's shared a glimpse into the work via his Instagram account, the final pieces are not yet ready. However, he does have a vision of how they will be shown: always in a grid of nine.

The photographer is preparing for an exhibit at the Miami International Airport that will be on view from November through February 2023.

He opens a fresh package of rolling paper and tobacco and rolls himself a tight cigarette. Sitting comfortably against the window, one hand hangs outside the ledge while the other rests on his knee. Paired with his white tee and blue jeans, it conjures up the memory of a young rebel without a cause.

Straightening his back, he sits tall and says, "This is what I'm going to keep doing. It feels good to go out there and execute an idea; to have a thought, figure it out on paper, take the photograph, print it, and then share it with the world."
KEEP MIAMI NEW TIMES FREE... Since we started Miami New Times, it has been defined as the free, independent voice of Miami, and we'd like to keep it that way. With local media under siege, it's more important than ever for us to rally support behind funding our local journalism. You can help by participating in our "I Support" program, allowing us to keep offering readers access to our incisive coverage of local news, food and culture with no paywalls.
Make a one-time donation today for as little as $1.