Dr. Schnoz Gets His Own TV Show, Dr. Miami 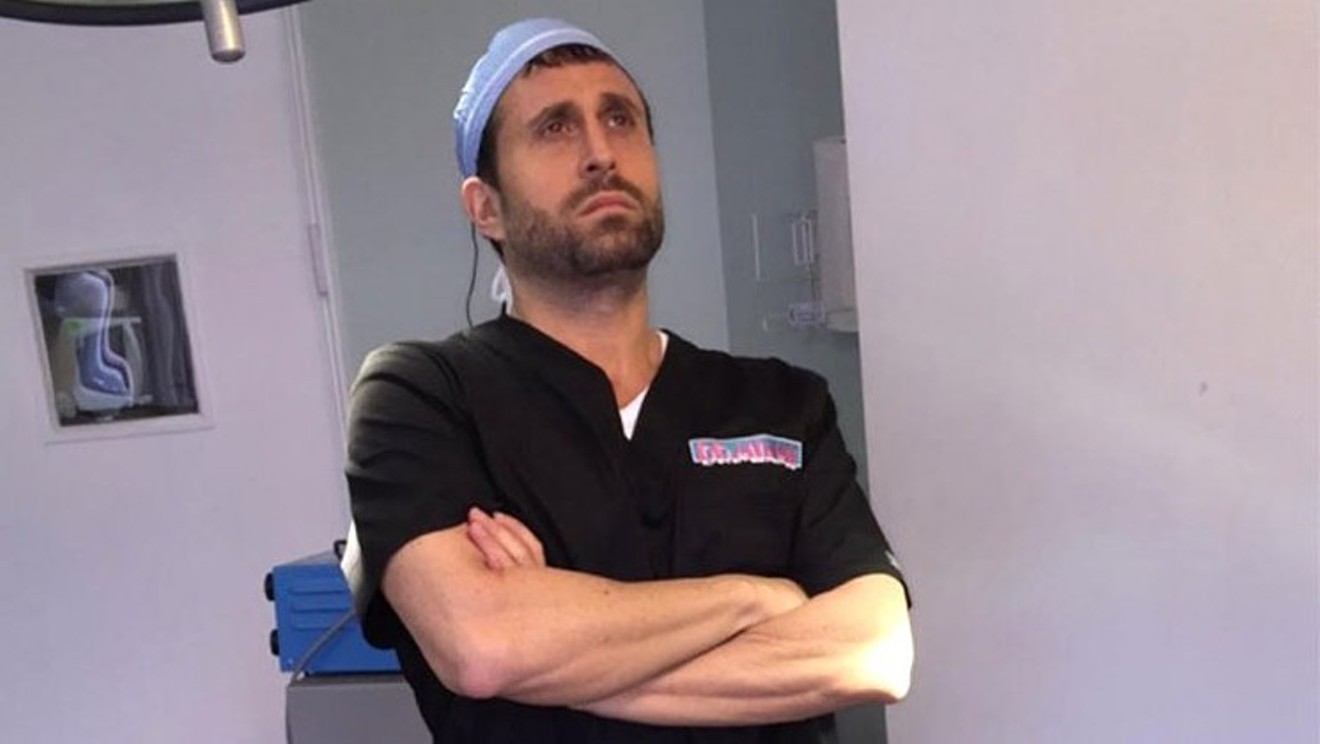 Dr. Michael Salzhauer in Dr. Miami. Courtesy of WE tv

Dr. Michael Salzhauer, one of the most famous and successful plastic surgeons in Miami, is also one of the camera-friendliest. He's built his business in large part through viral videos and social media stunts. Now he's taking the next logical step: starring in his own reality TV show.

This Friday, March 31st, WE tv will debut Salzhauer's new docuseries, Dr. Miami. The six one-hour episodes are produced by 2C Media, the local production company behind shows such as Airport 24/7: Miami and Swamp Wars.

The show will introduce Salzhauer to audiences outside South Florida, but locals have long watched his antics. New Times highlighted his internet fame and eccentric personality in 2012, and since then, he's been in and out of the news for a grab bag of shenanigans that had some people shaking their heads and others intrigued by his quirkiness and obvious popularity with clients. Salzhauer has been on the verge of breaking out on platforms beyond social media since that New Times story, but until recently, he hadn't found the right project.

Salzhauer attracts clients of all shapes, sizes, and characters.

"Dr. Miami first came to our attention from a cover of New Times in 2012. Back then, he was simply Dr. Michael Salzhauer or Dr. Schnoz," says Carla Kaufman Sloan, co-owner of 2C Originals, the production company that she and her husband Chris Sloan opened in Miami in 2005. "Being a local, Miami-based production company, we are laser-focused on our community and the exciting things going on here. When our development executive tossed the latest copy of New Times on my desk with a surgeon holding a stack of breast implants and the title 'Boob Tube,' I was intrigued. It wasn't until I met Dr. Michael Salzhauer in person that it all clicked. His personality and energy were and are ready-made for TV."

Dr. Miami offers a behind-the-scenes look at the everyday life of the Miami-based Salzhauer, AKA "the booty whisperer," and the patients he refers to as "beauty warriors." Salzhauer uses his uncensored and sometimes unconventional plastic surgery procedures to attract clients of all shapes, sizes, and characters. He has a massive social media following, in large part thanks to the uncensored live surgery videos he posts. Kaufman and 2C Originals actually filmed a pilot with Salzhauer four years ago, but the film had been sitting on a shelf unused. Cut to four years later, and execs with WE tv met with Kaufman's team after hearing about Salzhauer.

"The executives at WE tv saw a great talent, and we saw the possibility of making good on a promise we had made to Dr. Miami many moons ago," Kaufman says. "With a new direction and a lot of fans all over the globe, we partnered with WE tv to bring Dr. Miami from social media superstar to television superstar. We are all excited to see this project on-air."

For their part, the WE tv folks are here for the Dr. Miami craziness. They noticed what Salzhauer was doing on social media was garnering a lot of attention, and they wanted to take it to television.

"We love this show because Dr. Salzhauer is a completely unique and authentic individual who is at the top of his profession and using social media in an innovative and powerful way," WE tv President Marc Juris said in a news release upon the announcement of the show last July. "Plastic surgery shows have become a staple of unscripted TV," Juris continued, "but a surgeon using Snapchat and other social platforms to literally [sic] bring fans into the operating room represents a bold and fresh twist that connects old and new media and will give us additional opportunities to attract and engage WE tv viewers."