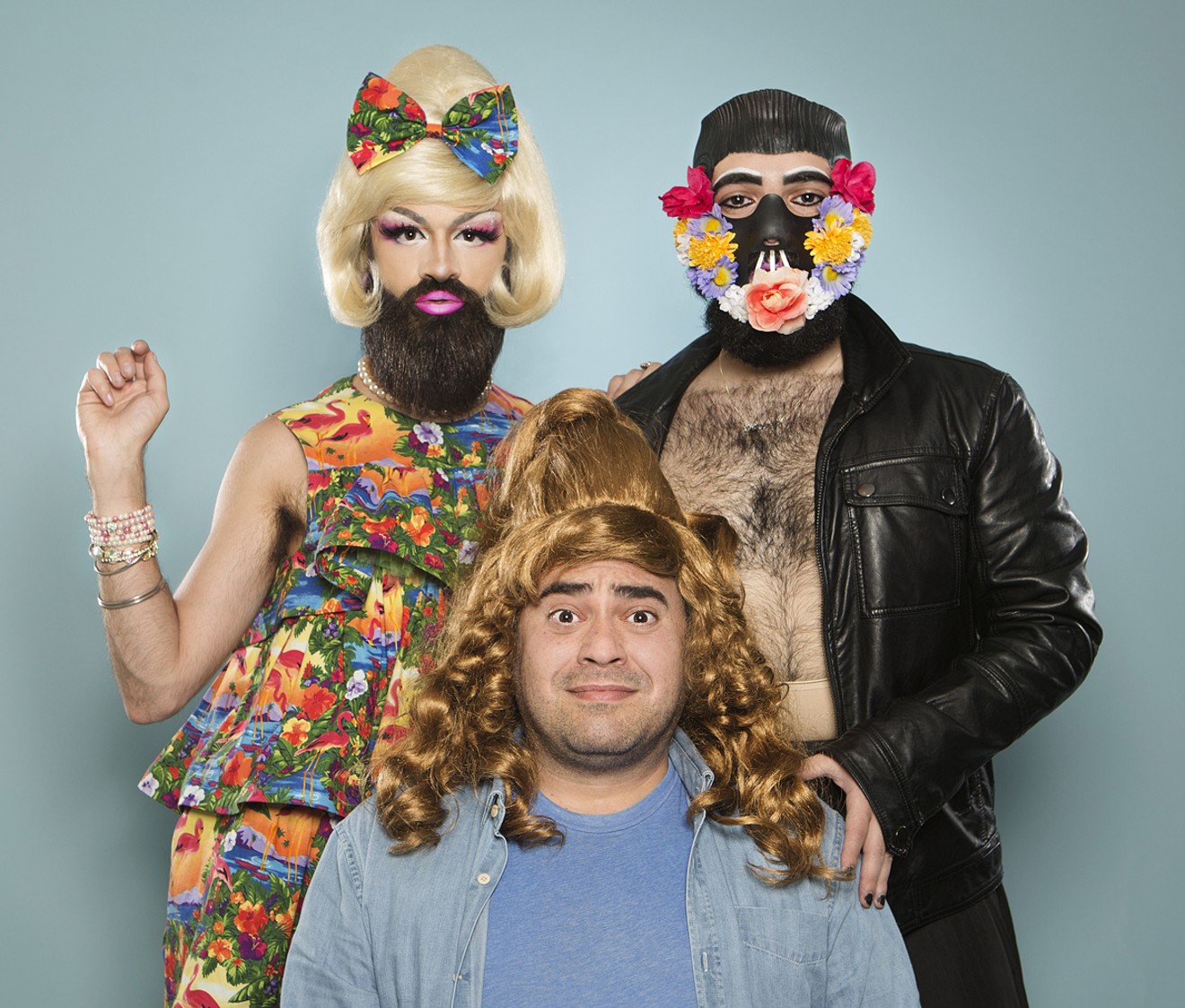 It's 2 a.m. on a recent Monday morning, and the Corner is lit. Literally.

Every second Sunday, this tiny, hip watering hole hosts its monthly queer party. Tonight an overeager drag queen preparing for her three-minute act with a smoke machine accidentally tripped the fire alarm. In a whirlwind of glitter, fake eyelashes, and body hair, at least 15 drag queens teeter outside in heels, reveling in the absurdity of the moment. Scores of queer folks, their friends, and even a few straight couples, who had sardined themselves inside to watch the tantalizing performances, spill onto North Miami Avenue.

No one seems to mind the delay, especially not a sultry little queen who goes by Queef Latina, flitting around in transparent plastic stilettos, citrus-inspired outfits, a platinum-blond wig, and a glorious, full, dark beard. Her given name is Antonio Mendez, and growing up as a self-proclaimed "weird kid" in Kendall, Queef never imagined attending anything this bizarre in her hometown. She escaped to art school in New York at the age of 17. When she returned less than three years ago, she recalls some nights when organizers couldn't find a single queen to perform at Counter Corner. Now, if anything, there are too many talented queens packed inside one bar without enough time or space to meet the growing demand.

"Everything started very organically," Queef says. "I don't think too many people sought to be a drag queen. They just started dressing up for fun, and before they knew it, they were wearing a wig and putting on makeup and up onstage."

It's been less than a year since the deadliest U.S. mass shooting claimed 49 lives at a gay club in Orlando. President Donald Trump regularly threatens and insults the LGBTQ community with disparaging comments about transgender civil rights and marriage equality. But the hatred and bigotry directed toward members of the drag community are having an unexpected effect. Against all odds, Miami's drag scene is experiencing a renaissance. Nights such as Counter Corner and Double Stubble at Gramps fill up quickly as members of the growing queer community show up to support one another.

"If you want to pour urine on yourself, you can."

"I thought there would be a perfect time [for drag], and I kept putting it off," says Queef's pal Hairy Bradshaw, whose real name is Jorgie Maloof. "But then the minute the shooting happened and Trump's election, I made a point that if I'm going to keep the weirdness alive, I was going to have to commit to it and contribute."

Of course, a friendly rivalry exists among the queens. But it's not about which outfit is the most elaborate or whose performance prompts the loudest applause. For the dozens of bearded, brazen drag babes across South Florida, this momentum is geared toward curating a fun, safe place where everyone is accepted.

"It's really just an expression of art," Queef says. "A lot of other places might give girls limitations or want something more mainstream. But [here], if you want to pour urine on yourself, you can." 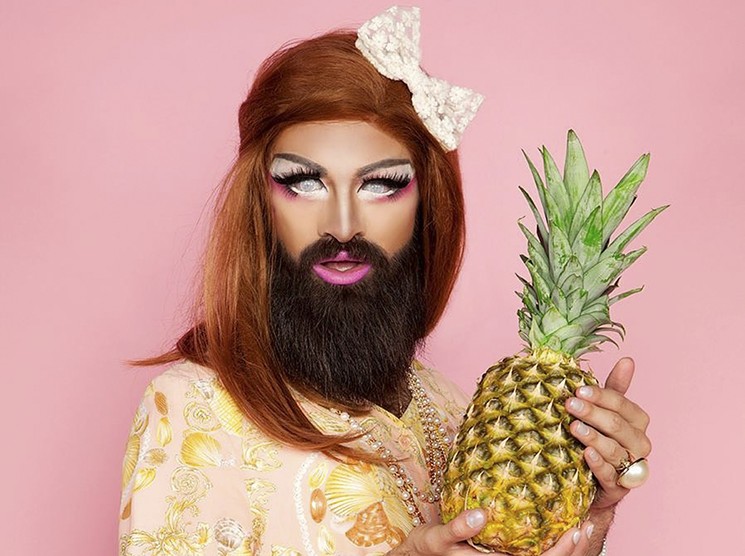 Queef Latina: "It's just an expression of art."
Photo by Dario Krakower

Miami's drag scene has never been especially inviting. In the 1940s, female impersonators entertained tourists in underground clubs. By the 1950s, the county was already trying to suppress them by passing a series of anti-cross-dressing laws. At least one queen was arrested for wearing a wig and makeup in public. Then the AIDS epidemic hit South Florida in the 1980s. As young gay men succumbed to the deadly virus, the queer community rallied together and inadvertently flourished as these titillating drag performances became an outlet for their fears and frustrations. When award-winning actor Robin Williams starred in The Birdcage, a film about a drag queen that was set in South Beach in 1996, Miami became a top destination for drag queens around the world.

"We had to create our own art, our own safety, and our own feeling of comfort," says one of Miami's longest-performing drag queens, Shelley Novak, whose real name is Tommy Strangie. "Living in a climate of fear is not a way to live."

Novak fondly reminisces about her decades-long drag career. She had never imagined becoming a full-time drag queen. Back then, there were only seven queens vying for performances at all the same clubs. To Novak's credit, she was hysterical and innately good at owning her character, whom she describes now as an "older stateswoman of drag... a transvestite Madeleine Albright, if you will." She has performed for celebrities such as Gianni Versace and Madonna. During one especially embarrassing encounter — which has become a teachable moment for the younger generation about drinking responsibly on performance night — Novak says she vomited on Ricky Martin's shoes from nerves.

Novak admits society was less tolerant and politically correct when she stood in the limelight. Performances also weren't as political. "If I'm in drag hosting with a clipboard, who's going to get shot first?" she asks. "These kids are not only taking a risk as performance art but by just being who they are now."

Watching this younger generation of queens perform is inspiring for Novak (who has hosted the annual Shelley Novak Awards to celebrate Miami's queens, now entering its 24th year this March). She says they're creating a look completely different from the perfectly coiffed female impersonators of the past.

"Drag was very clownish and Sábado Gigante — a cross between John Wayne Gacy and Carmen Miranda," she says. "Now none are shaving their beards. I don't think they even realize how avant-garde, forward-thinking, and talented they are."

About five years ago, Gio Profera and Josue Garcia burst open the Miami drag scene with their obnoxious and unapologetically strange Hialeah chonga-inspired drag characters, Juleisy y Karla. They deliberately look like a hot mess: off-kilter dresses exposing hairy chests, 5-o'clock shadows poking out beneath bright eye shadow, and butt cracks peeking out of too-tight pants. According to the hirsute duo, it's not drag or performance art — it's a lifestyle. 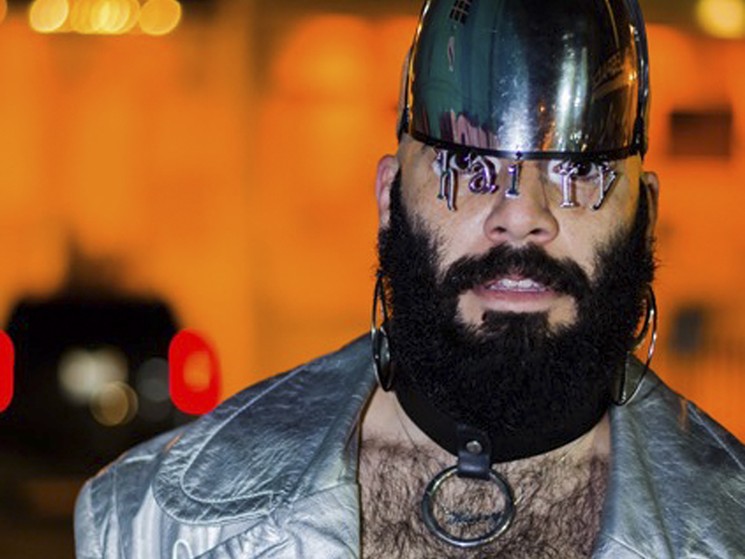 Juleisy y Karla were a catalyst for change. They were asked to host parties, and their anything-goes presence inspired others. It was around this time that Gramps launched the queer party Double Stubble. The growing turnout prompted a bingo night led by a drag queen (now hosted by Miss Toto). The Corner introduced Counter Corner. Kill Your Idol's karaoke night is now hosted by Shelley Novak.

The laid-back, accepting atmosphere made some people who were interested in drag less self-conscious. Slowly, folks began trying on their new drag personas and showing up in heels and makeup. Over time, this new generation of queens would evolve their own style and brand until, one by one, they would muster the courage to perform in front of a crowd.

"The girls have all really grown into themselves this past year," Queef says. "It's about building a brand, an aesthetic around your character that's still true to yourself."

Now Miami has a core group of about two dozen queens. Many have already become "drag moms" (like a big sorority sister of drag) to advise younger kids how to apply makeup, come out of their shells, and own their new characters. (Though most acts last only three minutes, their brief onstage moment requires weeks of preparation: finding the perfect outfit, accessories, makeup, and wig; mixing a track with the right collage of music; memorizing lyrics; and even rehearsing choreography.)

"I take them makeup shopping, teach them how to cover their eyebrows, and I coach them through the initial anxiety," Queef says. "And I always say, 'Listen, it's all about having fun. The second it's not, it's not worth doing.'?"

Though New York and Los Angeles have bigger drag scenes, they're arguably not as inviting or bizarre as the Magic City's. To celebrate their embraced weirdness and queerness, Queef Latina and Hairy Bradshaw have organized Wigwood, an all-day festival hosted by Hialeah's favorite drag duo, Juleisy y Karla, at Gramps. The fest will feature a lineup of more than 30 drag performances, live music sets, panel discussions, film screenings, safe-sex tutorials, and a charity auction led by RuPaul's Drag Race's Thorgy Thor and Alotta McGriddles. As Miami's drag scene blossoms, Queef Latina, Hairy Bradshaw, and Gramps owner Adam Gersten say they're committed to nurturing it in spite of the hate and bigotry surrounding us.

"Looking back on Wigwood in five years, I think we're going to remember this little thing at Gramps," Gersten says. "I think it's going to get huge and take over the neighborhood."