An early-morning view of the devastation from the Champlain Towers condo collapse in Surfside. Photo by Miami-Dade Fire Rescue via Twitter
click to enlarge 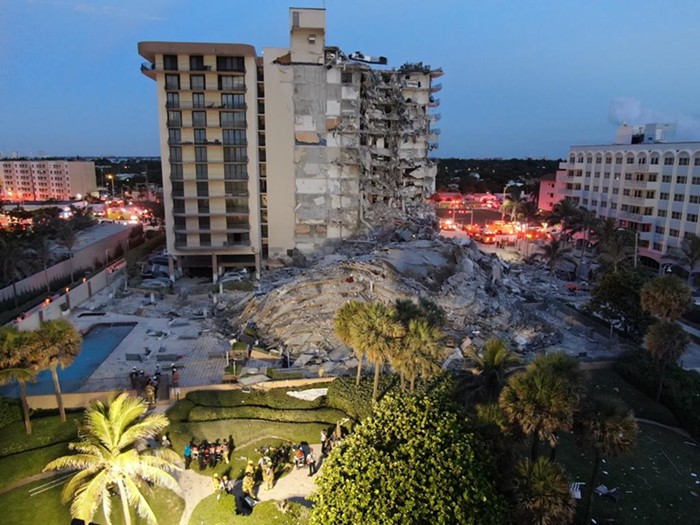 An early-morning view of the devastation from the Champlain Towers condo collapse in Surfside.
Photo by Miami-Dade Fire Rescue via Twitter
The quaint seaside community of Surfside was rocked in the early hours of this morning when half of an oceanfront condominium collapsed.

Residents of the undamaged portion of the building, along with families waiting to hear about loved ones, are being cared for at various locations, including a makeshift reunification center at the Surfside Community Center and the Grand Beach Hotel nearby on Collins Avenue.

Even as dawn broke, chef José Andrés' World Central Kitchen (WCK) was mobilizing to provide comfort in the form of meals, as were many members of Miami's restaurant community.


Monica Majors, who leads the Florida ground team for WCK says her people were on-site by about 10 a.m. to feed people who'd been displaced by the accident, as well as the first responders who were on the scene. "We were able to activate first thing this morning," Majors tells New Times.

Majors called on her network of Miami-area restaurants and food trucks that have worked with WCK during the pandemic, and many local establishments heeded the call.

"Right now there's a great deal of support," she says. "The strategy is to stagger the assistance because we don't know how long people are going to need the support."

According to Majors, establishments large and small are pitching in. Publix has donated fruit and sandwiches, Dunkin' Donuts is providing coffee, and the Miami Heat has offered to assist in any way possible. "There was a caravan of support over the 79th Street Causeway," Majors says.

Brian and Fatima Mullins drove their Ms. Cheezious food truck to the Grand Beach to prepare and distribute grilled cheese sandwiches and fries. Brian Mullins tells New Times that the truck got to the hotel around noon and was still serving four hours later.

"We're cooking in the truck and bringing sandwiches to the families," he says. "Hopefully, a meal will take their minds off of what's happening for a minute."


Mullins describes the tenants of the building as looking "tired", adding "they've all been up since two in the morning."

Cuban Guys, a local chain, has been feeding first responders, and Hometown BBQ will take over dinner service this evening. Michelle Bernstein and the staff at Cafe la Trova will also pitch in at some point.

It doesn't stop there.

Majors says nearly every establishment on the Surfside "strip" of restaurants along Collins Avenue has asked how they can help.

"The entire community," she says. "If I left out someone, it's because I've been working all day."

Josh Marcus, who owns Josh's Deli, offered to open his Harding Avenue restaurant to anyone in need of Wi-Fi, electricity, or simply a place to sit.

"I've been following the building collapse all day and I was wracking my brain of things I could do," he says. "I figured if someone couldn't get into their building, I could provide a safe space for them."

Marcus says many small businesses are trying to figure out how best to aid their neighbors. "It's a small town inside Miami. Surfside is a community and we're coming together to see how we can help."
KEEP MIAMI NEW TIMES FREE... Since we started Miami New Times, it has been defined as the free, independent voice of Miami, and we'd like to keep it that way. With local media under siege, it's more important than ever for us to rally support behind funding our local journalism. You can help by participating in our "I Support" program, allowing us to keep offering readers access to our incisive coverage of local news, food and culture with no paywalls.
Make a one-time donation today for as little as $1.