Where to Get Birria "Red" Tacos in Miami 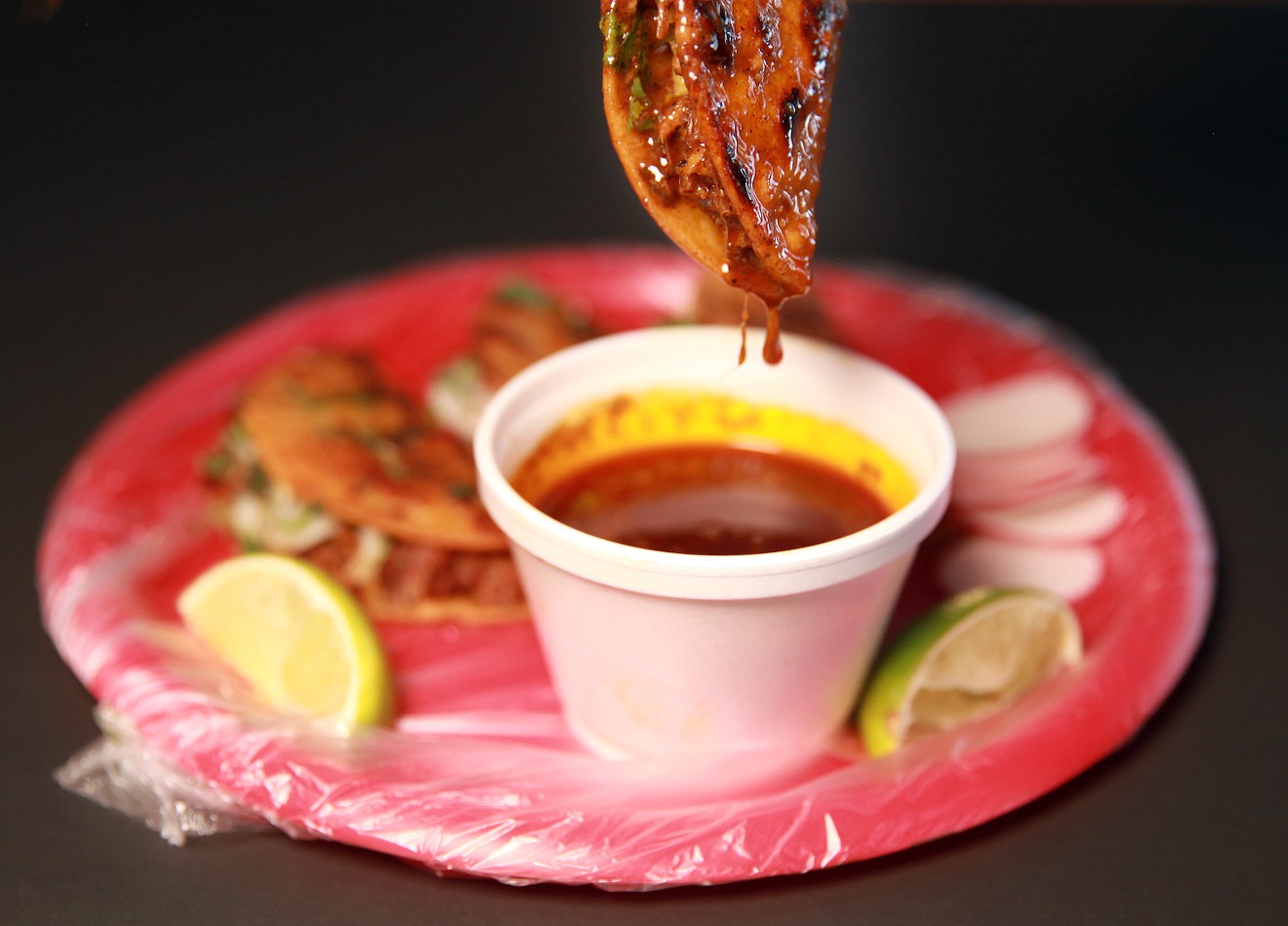 El Primo Red Tacos is a pop-up shop inside Miami's Pez restaurant specializing in birria tacos. Photo by Rey Delgado for El Primo Red Tacos
Dipping a taco in soup might not seem like an actual thing. But it is, especially on the West Coast, where the combo is already extremely popular. Known as birria tacos, they're often referred to as "red tacos" for the stewlike broth used for dipping this street fare. The result is a crisp, meaty, cheesy bundle of joy that appear to have been birthed by replacing tomato soup's best friend, the grilled cheese sandwich, with an overstuffed taco.

Originally, birria referred to the western Mexican meat stew thought to have origins in the state of Jalisco. The brilliant idea of serving it via a deep-fried taco actually began in Tijuana as easy street food, making its way north in recent years to become a significant trend across southern California. Traditionally made with guajillo- and chipotle-marinated lamb, in the states the dish often substitutes beef, which is no less amenable when it comes to dipping into the bay leaf, clove, and cinnamon-spiked stew.

Lucky for all of those Miamians currently salivating, a trip to Tijuana won't be necessary. The dish has landed in South Florida thanks to several local pop-ups that offer "red tacos" via easy to-go and delivery options. 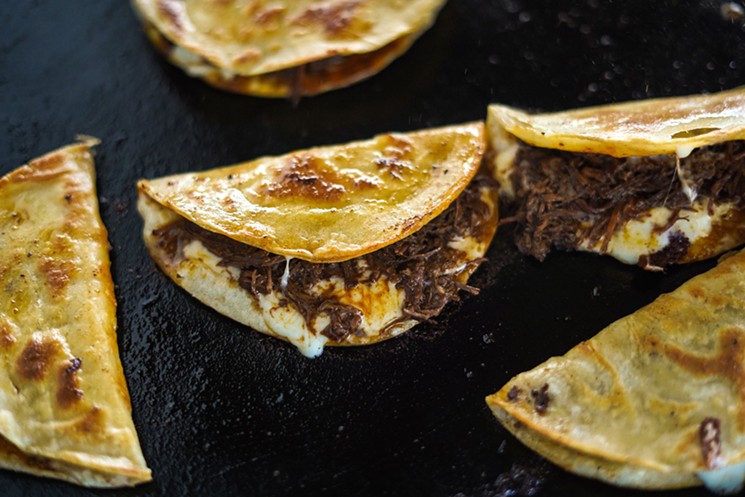 (Hollywood-based pop-up food truck)
instagram.com/donmanuelstacos
Chef/owner and former X Radio personality Manny Garcia learned how to make authentic birria in Houston after he left his longtime career to pursue his passion. For Garcia, that passion was tacos. And not just any tacos, but true West Coast-style birria he sells from his Hollywood-based food truck dubbed Don Manuel's Tacos. He's since traveled across Mexico, Texas, and California to sample the real deal, picking up traditional tips and cooking methods along the way. Today, you'll find Garcia slinging homemade birria via the food truck's bi-weekly pop-up. A modified pandemic-friendly online ordering system means meals are placed directly in your trunk for contactless pickup. Owing to this dish's time-consuming preparation, orders are limited to about 50 customers per week, with pickup on Saturday at a designated Broward County location. Take that first dunk and bite, and you'll see why it's worth the wait for another chance to snag these tacos. Tender brisket is steeped for days in Garcia’s own guajillo chili-based marinade, and a broth that simmers for 24 hours yields a deep, flavorful consommé. Tacos, priced at $4 apiece, are stuffed with meat and cheese and fried to a crisp golden brown. The rich consommé — wildly popular and made available for extra orders — is sold separately for $1.75 a cup. 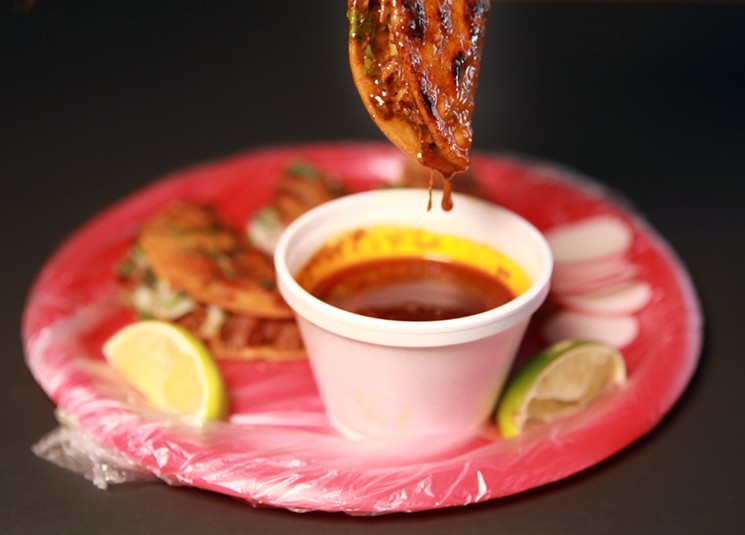 20 W. Flagler St., Miami
305-570-3440
pezmiami.com
At its new El Primo Red Tacos pop-up, Pez offers its birria in taco, quesadilla, and tostado form. The most popular option is the "Huesitaco," a birria taco with bone marrow ($6). But you can also get it as taco dorado, the beef-and-cheese version served in a crisp-fried taco shell ($4). No matter which way you go, be sure to order a few sides of the consommé, a 15-ingredient concoction that takes more than eight hours to prepare ($6). Diners can preorder via an online menu or visit the restaurant to try any of the pop-up's signature items, including the Birriamen, birria meat and broth served with ramen noodles ($14). The casual, outdoor-dining pop-up is open Tuesday, Friday, and Saturday from 5 to 10 p.m. Great news: Pez co-owner Frank Neri says a brick-and-mortar El Primo is in the works.

8498 Bird Rd., Miami
305-588-0113
facebook.com/tacobajarepublic
Taco Baja Republic chef/owner Rouge Peralta is whipping up his own version of the birria "red" taco via his recently launched food truck on Bird Road. Similar to what you'll find in a street taqueria in Mexico, Peralta's take is based on a traditional recipe given a U.S. twist with the use of tender stewed beef, and prepared in an authentic to-go manner just like in southern California. For $11.99, you'll get a tidy to-go box complete with three tacos. Each stuffed to the brim, they are topped with fresh diced onion and cilantro and served alongside a cup of Peralta's souplike broth for dipping. On Taco Tuesdays, you can get the very same birria tacos for $2 apiece — just don't forget to ask for a side of stew. Order your tacos straight from the truck, or visit DoorDash to have them transported directly to you.
KEEP MIAMI NEW TIMES FREE... Since we started Miami New Times, it has been defined as the free, independent voice of Miami, and we'd like to keep it that way. With local media under siege, it's more important than ever for us to rally support behind funding our local journalism. You can help by participating in our "I Support" program, allowing us to keep offering readers access to our incisive coverage of local news, food and culture with no paywalls.
Make a one-time donation today for as little as $1.