J. Wakefield Brewing will drink to that, bitch! Rich Fury/Getty Images
For years now, the "Free Britney" movement has been gaining momentum, with fans growing increasingly concerned about pop star Britney Spears' mental and emotional health as nearly every aspect of her life is controlled by her father, Jamie Spears, under a court-mandated conservatorship.

Following the 39-year-old pop star's heart-wrenching confession describing the trauma she has endured throughout the 13-year conservatorship, it seems the entire world is now intimately aware of Spears' struggles.

The outpouring of support from around the globe has only helped her cause; this week brought word that the singer will be permitted to hire her own lawyer — a development that might prove to be the first step in ending the conservatorship.

That news is certainly worthy of a hearty cheers! from any Britney fan, and Miamians can suit the action to the word with J. Wakefield Brewing Co.'s recent can release: Oops!... I Did It Again, a 6.5 percent ABV India Pale Ale that New Times has learned was in fact brewed by accident. 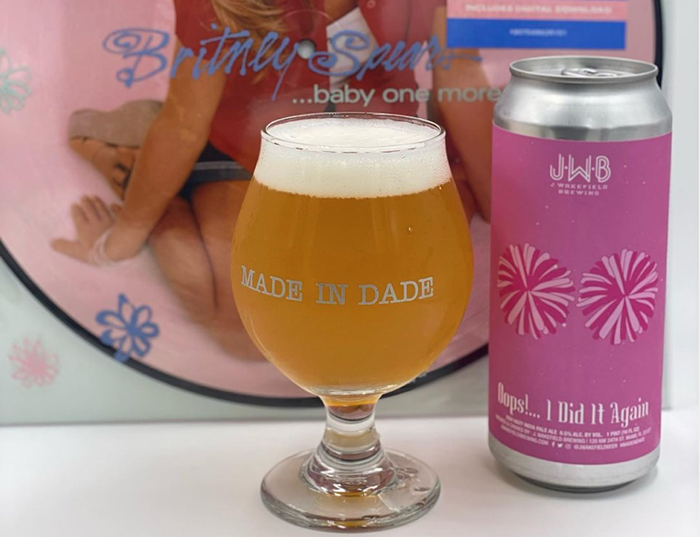 Oops!... I Did It Again IPA was indeed brewed by accident — a fitting homage to Britney Spears' struggle to end her conservatorship.
Photo courtesy of J. Wakefield Brewing
The beer itself was originally meant to serve as a base for the brewery's sour ale, but things didn't go according to plan.


"We had to act quick to save the beer, so we made it into a hazy IPA," brewery operations manager Maria Cabre, tells New Times.

Cabre describes the beer, made with Nelson Sauvin and Motueka hops, as a hazy IPA that's light-bodied, crisp, and refreshing. "You get a lot of tropical fruit notes from the hops," she adds.

As for the name?

Cabre says she's a huge Britney fan and whenever something doesn't go according to plan, she's been known to quote the singer's 2000 megahit.

The beer, by the way, was named before this week's most recent turn of events in the Spears conservatorship hearings.

Oops!... I Did it Again is available in four-packs at the Wynwood taproom ($18) and on draft. It's a super-limited run, so get it while you can, bitch.
KEEP MIAMI NEW TIMES FREE... Since we started Miami New Times, it has been defined as the free, independent voice of Miami, and we'd like to keep it that way. With local media under siege, it's more important than ever for us to rally support behind funding our local journalism. You can help by participating in our "I Support" program, allowing us to keep offering readers access to our incisive coverage of local news, food and culture with no paywalls.
Make a one-time donation today for as little as $1.