During the dog days of summer, the dangerous combination of extreme heat and high humidity sends most Miamians running for an air conditioner or a cold drink. If it’s the latter you’re looking for, the Magic City is also known as a boozy city, with a wealth of sophisticated cocktail programs turning out updated menus that reflect the season.

From refreshing fruit-filled libations to bone-chilling slushes, prepare to be whisked away to a tropical paradise getaway in the form of a nice cool glass. Imbibe on ten of the best summer cocktails right this moment in the 305. After all, it’s 5 o’clock somewhere! 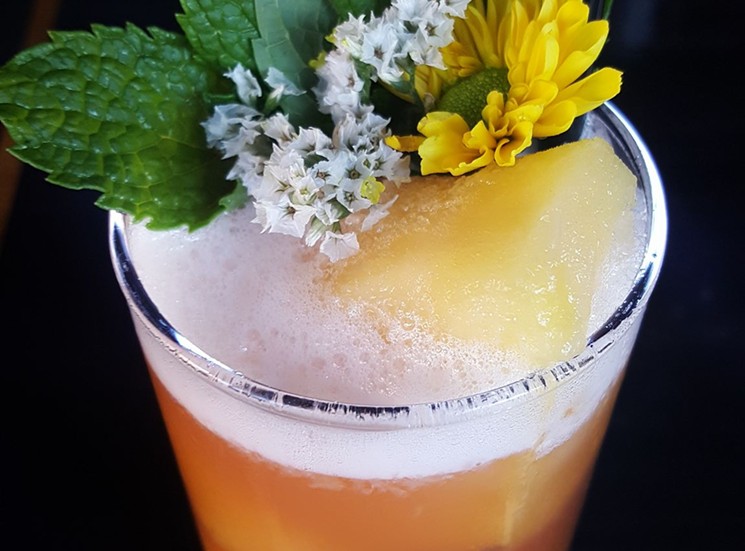 Courtesy of The Local Craft Food & Drink
1. Not Your Average Zombie at the Local Craft Food & Drink
Skip that watered-down, artificially flavored cocktail, and head to Coral Gables hot spot the Local Craft Food and Drink for the perfect pick-me-up on a hot summer day or in the event of a zombie apocalypse. Not Your Average Zombie ($13) features a tall glass of Brugal Especial, Appleton Signature, Afrohead 15-Year Rum, Pama, guanabana, lime, and pineapple ice to keep the drink cold and strong — which is exactly what you need to survive.

Courtesy of Sugarcane
2. Guayaba Dream at Sugarcane Raw Bar Grill
Miami denizens love their guava, especially stuffed inside flaky pastelitos and iconic ice cream flavors. But what better way to enjoy the beloved deep pink-colored fruit than by adding it to booze? Leave it to Sugarcane Raw Bar Grill to do just that in its dream-come-true cocktail, the Guayaba Dream Slush ($13). Sweetened with guava purée, the organic Ketel One vodka slushie from Kelvin Slush also uses orange bitters and a Disaronno floater that pairs well with Sugarcane’s selection of oysters and fresh crudos.

Courtesy of Zuma
4. Zuma Mai Tai at Zuma
The classic Polynesian cocktail gets a contemporary Japanese twist at the izakaya-style Zuma Miami, located at the swank Epic in downtown. For $14, order the Zuma mai tai, with plum sake, house-made rum grog, fresh pineapple juice, blood orange, a squeeze of lime, and almond essence, for an update to the celebrated summertime sipper.

Courtesy of Seaspice
5. Pretty Girl at Seaspice
As a long-established Magic City favorite and the unofficial drink of South Florida, the mojito gets a major summer makeover at Seaspice, downtown's superchic seafood brasserie and lounge. The Pretty Girl ($14) maintains its refreshing charm, while mixing in fresh watermelon juice, lime, agave, and Barceló Gran Platinum for a lighter, less-guilty version of the sweet and indulgent original.

next
KEEP MIAMI NEW TIMES FREE... Since we started Miami New Times, it has been defined as the free, independent voice of Miami, and we'd like to keep it that way. With local media under siege, it's more important than ever for us to rally support behind funding our local journalism. You can help by participating in our "I Support" program, allowing us to keep offering readers access to our incisive coverage of local news, food and culture with no paywalls.
Make a one-time donation today for as little as $1.
Maureen Aimee Mariano is a freelance food writer for Miami New Times. She earned a bachelor of science in journalism from the University of Florida before making her way back to the 305, the city that first fueled her insatiable appetite.
Contact: Maureen Aimee Mariano
Follow:
Facebook: Maureen Aimee Mariano
Twitter: @maureenaimee