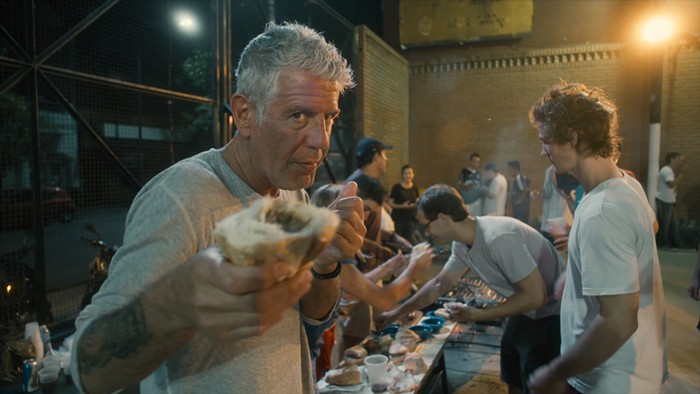 Anthony Bourdain
Photo courtesy of Focus Features
At the beginning of Roadrunner: A Film About Anthony Bourdain, a documentary that opens in theaters today, July 16, a willowy, cigarette-smoking Bourdain is shown at work at Brasserie Les Halles in Lower Manhattan.

It's 1999, long before Bourdain is a household word, but already the chef's sharp tongue emerges when his fishmonger is late with a delivery.

"It's why all chefs are drunks,” Bourdain says to a camera. “We don't understand why the world doesn't work like our kitchens.”

Bourdain never rose to fame as a chef. Instead, a piece he wrote for the New Yorker was so well received that it led to a book deal. Kitchen Confidential, the resulting tome, propelled the not-so-young chef to media superstardom. Scenes from Roadrunner, a film by Morgan Neville (20 Feet From Stardom, Won't You Be My Neighbor?) show an incredulous Bourdain announcing he has been tapped to appear on Oprah.


In the film, the husband-and-wife team of Christopher Collins and Lydia Tenaglia, who co-produced much of Bourdain's body of TV work, share a revelation: The chef, whom they wanted to film eating across the world, had never traveled, aside from a few trips to France to visit family. With that in mind, the then-newlyweds set off on a six-week journey to film Bourdain. The first stop, Japan, proved a disaster. In one clip, an uneasy Bourdain is seen silently sipping broth, clearly out of his element.

At the next stop the chef came into his own. Amid the hectic streets and night markets of Vietnam, Bourdain shone. And a star was born.

The 16 years Bourdain devoted to telling stories for television affected his personal and business relationships. He divorced his childhood sweetheart and married Ottavia Busia, who worked for chef Eric Ripert (Le Bernardin) at the time. Dissatisfied with filming "eating challenges" like slurping down the still-beating heart of a cobra, Bourdain began filming in increasingly difficult locations.

An episode of No Reservations (which premiered in 2005 ran through 2012) found Bourdain and crew in the middle of a violent conflict in Beirut, Lebanon, where they were eventually evacuated by U.S. troops. The segment, which aired as a special in 2006, earned an Emmy. In a visit to the Democratic Republic of the Congo shot for Parts Unknown, a series similar to No Reservations that aired from 2013 until Bourdain's death by suicide in 2018, the journeyman channeled one of his favorite films, Apocalypse Now.
The instant fame and 250-days-a-year travel schedule began to weigh on Bourdain, though several of his producers say he had opportunities to slow down and work on his own terms. But Bourdain's terms were to work himself that hard. Artist David Choe, a friend of Bourdain's, with whom he shared a susceptibility to drug addiction, chillingly explains Bourdain's work ethic: "People forget that Anthony Bourdain was a junkie. It jumped. The addiction jumped."

The last part of Roadrunner taps into Bourdain's relationship with actress Asia Argento following his second divorce. He throws himself into the affair, to the point where he allows Argento to direct an episode of Parts Unknown, much to the dismay of his crew. He fires longtime cameraman Zach Zamboni after he and Argento don't get along.

Five days after photos of Argento with another man are posted in a tabloid, Bourdain is found dead in a French hotel by his friend Ripert. Bourdain and the master chef were in France to shoot an episode of Parts Unknown.


Neville opted not to interview Argento for his film. And while her relationship with Bourdain appears to have been tumultuous, Bourdain's suicide at the age of 61 was surely not attributable to a single event. For years, the chef talked about his own death. Bourdain had fame, wealth, and adventures, but contentment always eluded him.

In what might be the most haunting scene in the documentary, Bourdain is in Miami Beach with legendary punk rocker Iggy Pop. Bourdain runs down Pop's early years — the travel, the drinking, the excess — and asks the leathery punk icon, "What just thrills the shit out of you today?"

Pop responds, "To be loved and to appreciate the people that are giving that to me."

Bourdain nods his head, but his eyes are blank, as though unable to fathom that level of intimacy.

Roadrunner: A Film About Anthony Bourdain. Directed by Morgan Neville. Rated R. 118 minutes. Now screening in theaters.
KEEP MIAMI NEW TIMES FREE... Since we started Miami New Times, it has been defined as the free, independent voice of Miami, and we'd like to keep it that way. With local media under siege, it's more important than ever for us to rally support behind funding our local journalism. You can help by participating in our "I Support" program, allowing us to keep offering readers access to our incisive coverage of local news, food and culture with no paywalls.
Make a one-time donation today for as little as $1.