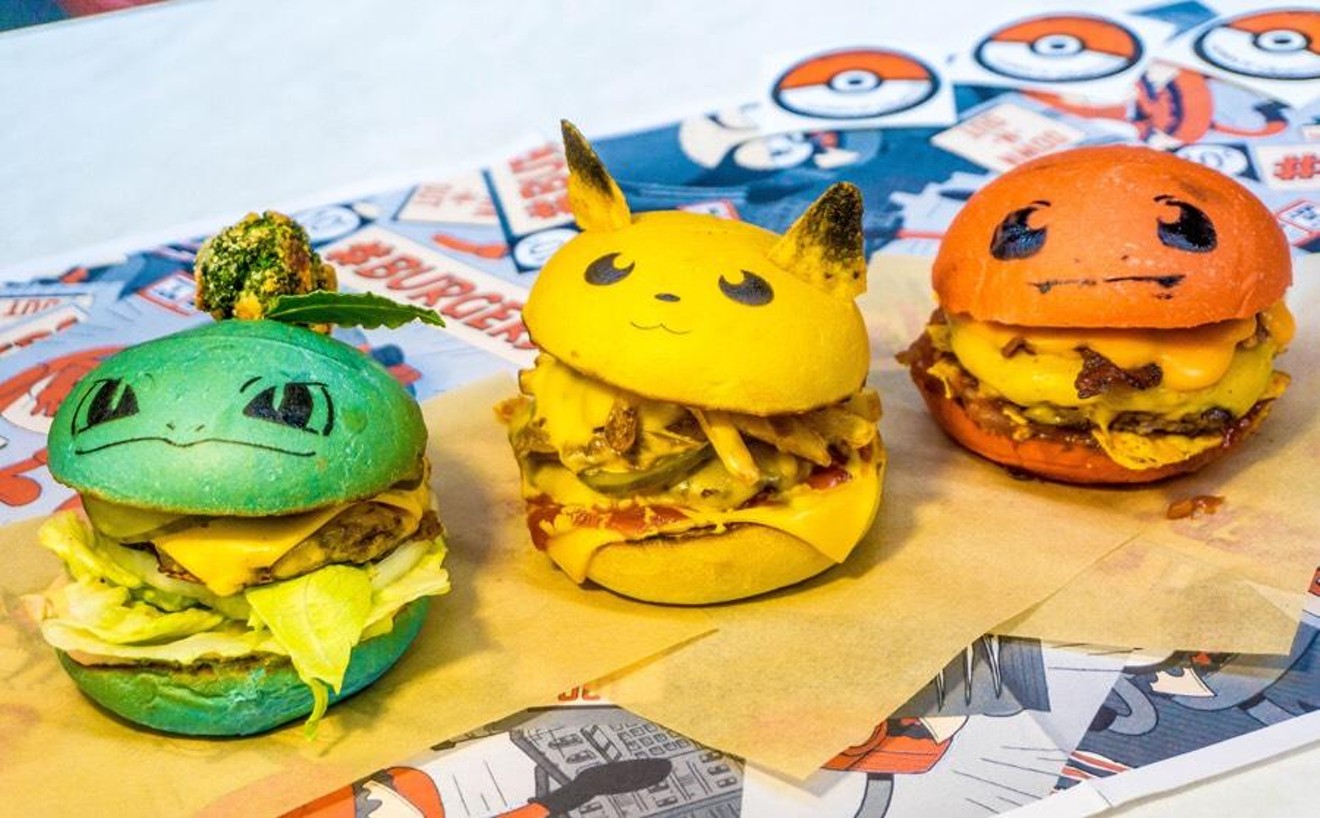 This month's scheduled PokéBar pop-up has been scrapped. Photo courtesy of Wonderland Global Events
Pokémon fans, take note: PokéBar, the Pokémon-themed pop-up, has changed its name and just about everything else.

The biggest change, however, is the name.

PokéBar is now being called the Monster Brunch, although its reworked website calls the event the Monster Burger Bar.

In an email to New Times, Viral Ventures, the pop-up's marketing company, said, "Despite being unaffiliated with Pokémon Nintendo, we unfortunately have been given no other option but to change the name of the event and a number of elements. We are currently in the process of rebranding and relaunching in Miami and will be contacting our customers shortly. Please note that the photographed burgers will remain the same!"

The Eventbrite site touts basically the same event details as the original PokéBar — games, trivia, cute burgers, and prizes for the best dressed. But what should people dress up as? Is the Monster Brunch still a Pokémon-themed party in disguise? Pokémon, after all, is short for "Pocket Monsters," and the event will still serve Pokémon-inspired burgers.

Two days ago, the Pokémon-themed bar canceled its Atlanta run. Prior to that, the pop-up was canceled in Los Angeles, Denver, Cleveland, and other cities.

All future PokéBar events have been rebranded to the Monster Brunch theme. Cities scheduled to host the pop-up include New York, Austin, London, Dublin, Denver, and Miami.

It's not all that surprising that the PokéBar concept was scrapped. Nintendo is notoriously litigious and protective of its properties. Until last year, the Japanese videogame company didn't allow users to share gameplay online via services such as Twitch and YouTube. Vloggers who wanted to share footage of Nintendo games had to register in a very convoluted revenue-sharing scheme with the company. Competitors Sony and Microsoft required no such restrictions.

The Pokémon franchise was created in 1995 and became an enormous pop-culture phenomenon in the United States by the late '90s thanks to an animated TV series and trading cards. Nintendo has also published several role-playing games on its console systems such as the Game Boy and 3DS, whose sales have rivaled those of products featuring Nintendo's mascot, Mario.

According to an email New Times received in September, the Miami pop-up dates were sold out. New Times has reached out to the event's organizer, Wonderland Global Events, for information about refunds and exchanges. For now, ticketholders' best bet is to contact Eventbrite to begin the refund process.
KEEP MIAMI NEW TIMES FREE... Since we started Miami New Times, it has been defined as the free, independent voice of Miami, and we'd like to keep it that way. With local media under siege, it's more important than ever for us to rally support behind funding our local journalism. You can help by participating in our "I Support" program, allowing us to keep offering readers access to our incisive coverage of local news, food and culture with no paywalls.
Make a one-time donation today for as little as $1.