Photo by Michele Eve Sandberg
Oktoberfest in Miami isn't the raging 18-day festival like the one in Munich, but there are still myriad fest-related events happening in town. Germany's festival began September 16, yet the annual revelry associated with excessive beer consumption is just getting started in the Magic City.

The roots of Oktoberfest can be traced to the celebration of a 19th-century royal marriage in Germany and included horse races, but it since has expanded to carousel rides, and an ever-expanding presence of beer tents that grew into halls which accommodated hundreds of people at a time.

During the next month, more than a dozen Oktoberfest-themed bacchanals will take place across Miami-Dade, Broward, and Palm Beach Counties. From beer fests to sausage parties, here are the best:

The Butcher Shop. This year, the Butcher Shop's Oktoberfest runs September 28 through October 15, offering a DJ each weekend and contests such as the liter chug, liter hold, and stein hoist. Besides the beer, there will be specials on food and Jägermeister shots, raffles, prizes, and giveaways. Thursday, September 28, through Sunday, October 15, at 165 NW 23rd St., Miami; 305-846-9120; butchershopmiami.com.

Coral Gables Oktoberfest. For 23 years, the Gables has paid tribute to Oktoberfest with a music-and-suds-filled bash of its own. This year, the festival will run October 5 through 15 at Fritz & Franz Bierhaus in Merrick Park. Thursday, October 5, through Sunday, October 15, at 60 Merrick Way, Coral Gables; 305-774-1883; miamibierhaus.com.

German American Social Club. Founded in 1949, this club has a mission to "celebrate our heritage by sharing with the community our German history, culture, and traditions," according to its website. The German American Social Club also hosts the longest-running Oktoberfest celebration in the United States and the largest German cultural event in South Florida. Friday, October 13, through Sunday, October 15, and Friday, October 20, through Sunday, October 22, at 11919 SW 56th St., Miami; 305-552-5123; gascmiami.org.

Hofbräu Beerhall Miami. A fixture in South Beach for years, Hofbräu is where you can enjoy patio dining with authentic Bavarian fare and pound 34-ounce mugs of beer imported from Munich. Its beer-hall concept is meant to evoke a year-round Oktoberfest spirit. Recently, Hofbräu expanded to a location at Bayside Marketplace. Daily at 943 Lincoln Rd., Miami Beach; 305-538-8066; hofbraumiami.com.

Sam Adams Octoberfest. Now in its eighth year, Sam Adams Octoberfest in Miami will be held at the Mana Wynwood Convention Center. The fest will offer beer, live music, entertainment, an artisan market, authentic food, a beer hall, and a chance to win a bottle of Sam Adams Utopias. Friday, October 6, through Sunday, October 8, at 318 NW 23rd St., Miami; 305-573-0371; manawynwood.com.

WOBtoberfest. World of Beer in Dadeland will celebrate with pretzels, games, and a selection of local Oktoberfest beers on draft. Saturday, October 21, at 9010 SW 72nd Pl., Miami; 786-623-3522; worldofbeer.com/dadeland. 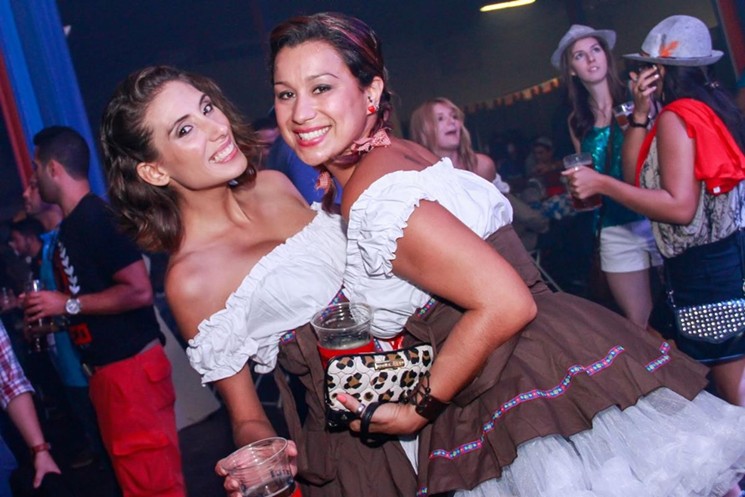 Barktoberfest 2017. This one is for dog lovers. Though there won't be any beer or brats at this festival, Quiet Waters Park is allowing splash time for pooches. Expect rescue and nonprofit groups, a doggie marketplace, bounce houses, face painting, and costume contests. Fifty-minute sessions in the water cost $5 per pup. Only dogs weighing 25 pounds or less will be permitted in the first session, beginning at 8 a.m. The park charges an entrance fee of $1.50 per person (free for kids 5 and younger) on the weekends and holidays. Saturday, October 7, and Sunday, October 8, at 401 S. Powerline Rd., Deerfield Beach; 954-357-5100; broward.org.

October Sausage Fest Riverwalk. Although not necessarily an Oktoberfest or beer event, the inaugural Sausage Fest at Esplanade Park will offer a collection of tubed meats, from hot dogs to chorizo cooked up by a selection of vendors. This free event will also feature live music and games. Saturday, October 21, at 400 SW Second St., Fort Lauderdale; 954-468-1541; goriverwalk.com.

Oktoberfest West Broward Grassroots Fundraiser. The Broward Democratic Party will host an Oktoberfest fundraiser at Bokamper's Sports Bar & Grill in Plantation. Tickets cost $25 each and include a drink. The proceeds will go toward raising money for the party's training program and get-out-the-vote efforts for 2018. Tuesday, October 3, at 1280 S. Pine Island Rd., Plantation; 954-533-7152; bokampers.com/fort-lauderdale.

Due South Brewing Company. Numerous Oktoberfest beers will be on tap, including What the Hef? Hefeweizen, Pumpkin Latte ale, and Extra Spicy Mexican Standoff. There will also be food trucks with special German-inspired menus, polka music, and a limited-edition Oktoberfest 2017 stein. Thursday, September 28, through Saturday, September 30, at Due South Brewing, 2900 High Ridge Rd., Boynton Beach; 561-463-2337; duesouthbrewing.com.

Palm Beach Brew 2 at the Zoo. All beers served at this festival are brewed fewer than 200 miles away, making Palm Beach Brew 2 at the Zoo the lowest-carbon-footprint beer fest in the Southeast. The new date for this event is October 13; previously purchased tickets are good for the new date. Friday, October 13, at 1301 Summit Blvd., West Palm Beach; 561-547-9453; palmbeachzoo.org.

South Florida Marzen Brew-Off. Breweries from Miami-Dade, Broward, and Palm Beach Counties will compete for the best Marzen style of beer, a traditional Oktoberfest beer, at Biergarten Boca Raton. Confirmed breweries include the Tank, Wynwood, and Due South, among others. Expect beer samples, glassware giveaways, live music, and a liter-holding contest. Saturday, September 30, at 309 Via de Palmas, #90, Boca Raton; 561-395-7462; biergartenboca.com.