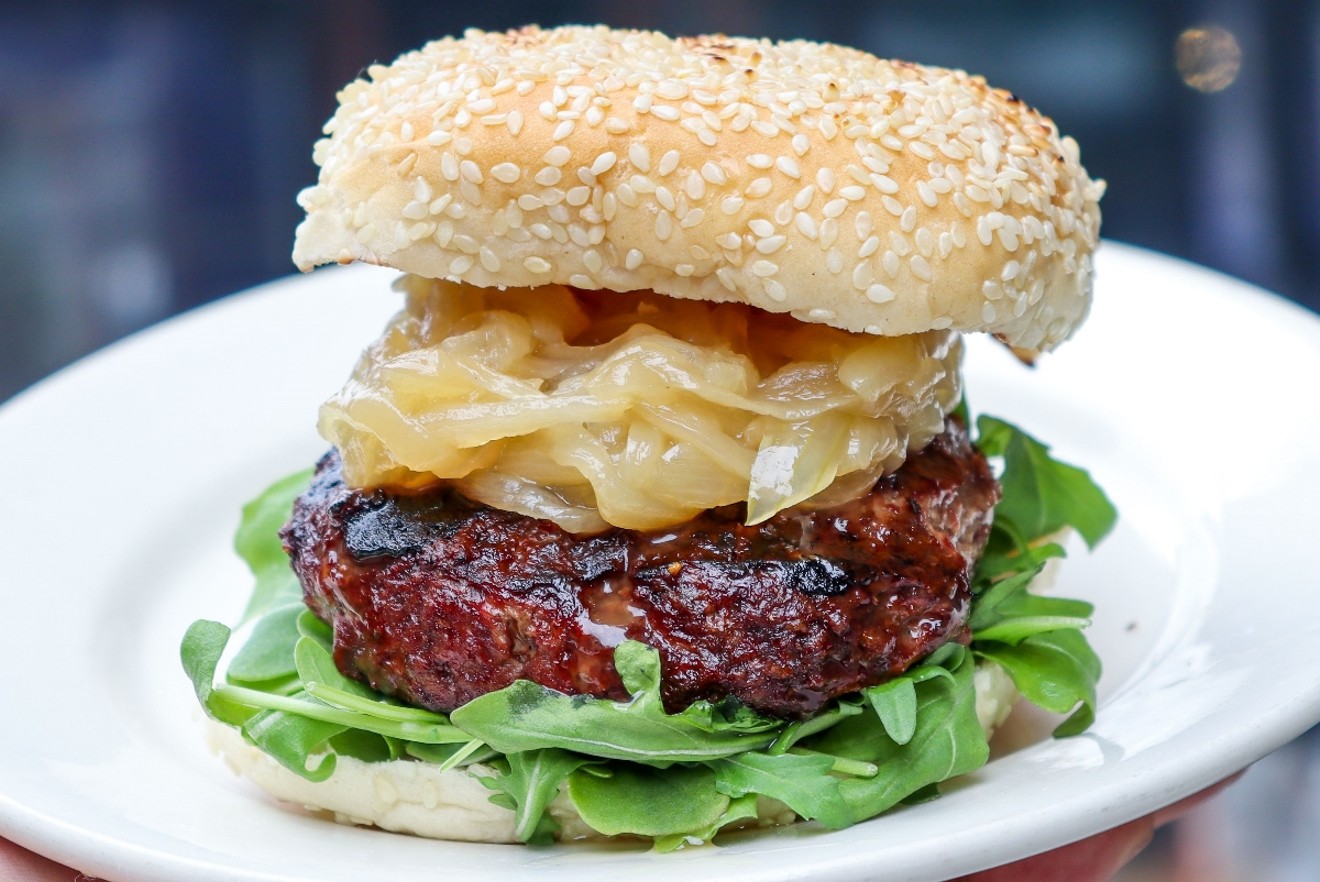 Minneapolis says "Jucy Lucy," Whitmans says "Juicy Lucy." Miami will get the latter in early 2022. Photo courtesy of Whitmans/Carma Connected
The latest restaurant to make the migration from Manhattan to Miami, Whitmans is not your average city slicker.

Opening in early 2022 on the 900 block of West Avenue on Miami Beach, Whitmans New York brought the Juicy Lucy, in all its double short rib-blended, caramelized onion topped, molten, oozy, stuffed with house-made pimento cheesy glory, to the Big Apple in 2010. Par for the course, it heads to Florida 12 years later, but better late than never.

For the uninitiated, a Jucy Lucy — that's how it's spelled in its hometown — is the Philly cheesesteak of Minneapolis, where locals argue over which restaurant (Matt's Bar or the 5-8 Club) gets credit for creating what is essentially a hamburger stuffed with cheese.

Whitmans' version features two thin short-rib-blend patties stuffed with pimiento cheese and topped with caramelized onion, Bibb lettuce, tomato, spicy pickles, and a Sriracha-based aioli on a sesame-seed bun — or, as co-owner Larry Kramer tells New Times, "The Juicy Lucy is where New York City takes on a Minneapolis favorite. Molten, oozing hot cheese in the center of your patty is the perfect complement with sweet, caramelized onions and unforgettable bread."

The South Beach location will mark Whitmans’ first venture out of New York City, home to three brick-and-mortar locations (in the East Village, Hudson Yards, and SoHo) and one fast-casual spot inside the Row Hotel just off Times Square.

The name, the owners confirm, is inspired by the poet Walt Whitman, representing “quality, Americana and a longstanding culinary heritage.” And while the Minnesota mouthful that is the Juicy Lucy is the restaurant's most popular item, said culinary heritage also includes the "East Villi Cheesesteak," a chip steak with sautéed onions and melted cheese on a toasted hoagie roll; the "Mangold," a grilled brisket-blend patty with melted cheddar, red onions, and horseradish cream sauce on a toasted sesame seed bun; and the "PB&B," a short rib patty blend with peanut butter and applewood smoked bacon on a potato bun. There are also turkey and veggie burgers, chicken sandwiches, grilled cheeses, and salads for those who don’t partake of beef. Sides include tater tots, blue cheese fries, sautéed kale, and organic potato chips. There’s also beer, wine, milkshakes, root beer floats, and milk and cookies.

When Kramer and James Cruickshank opened the first Whitmans on East Ninth Street in the East Village in 2010, they didn’t set out to revolutionize the burger, but they did want to tweak our notion of comfort food.

"Whitmans is elevated comfort food," Kramer explains. "Every burger has a unique touch with unique blends and custom sauces. We take pride in creating out-of-the-box combinations, such as our PB&B that surprise and delight our guests.

When it opens, the South Beach restaurant will have 30 seats inside (including eight at the bar) and 15 outdoors. In late 2022, a planned Wynwood location will open its doors as largest Whitmans yet.

Until the Miami Beach location opens, you can sate your Juicy Lucy and Bluicy (with blue cheese) cravings by the ten-pack via Goldbelly ($129). Or wait it out while stalking their Insta.