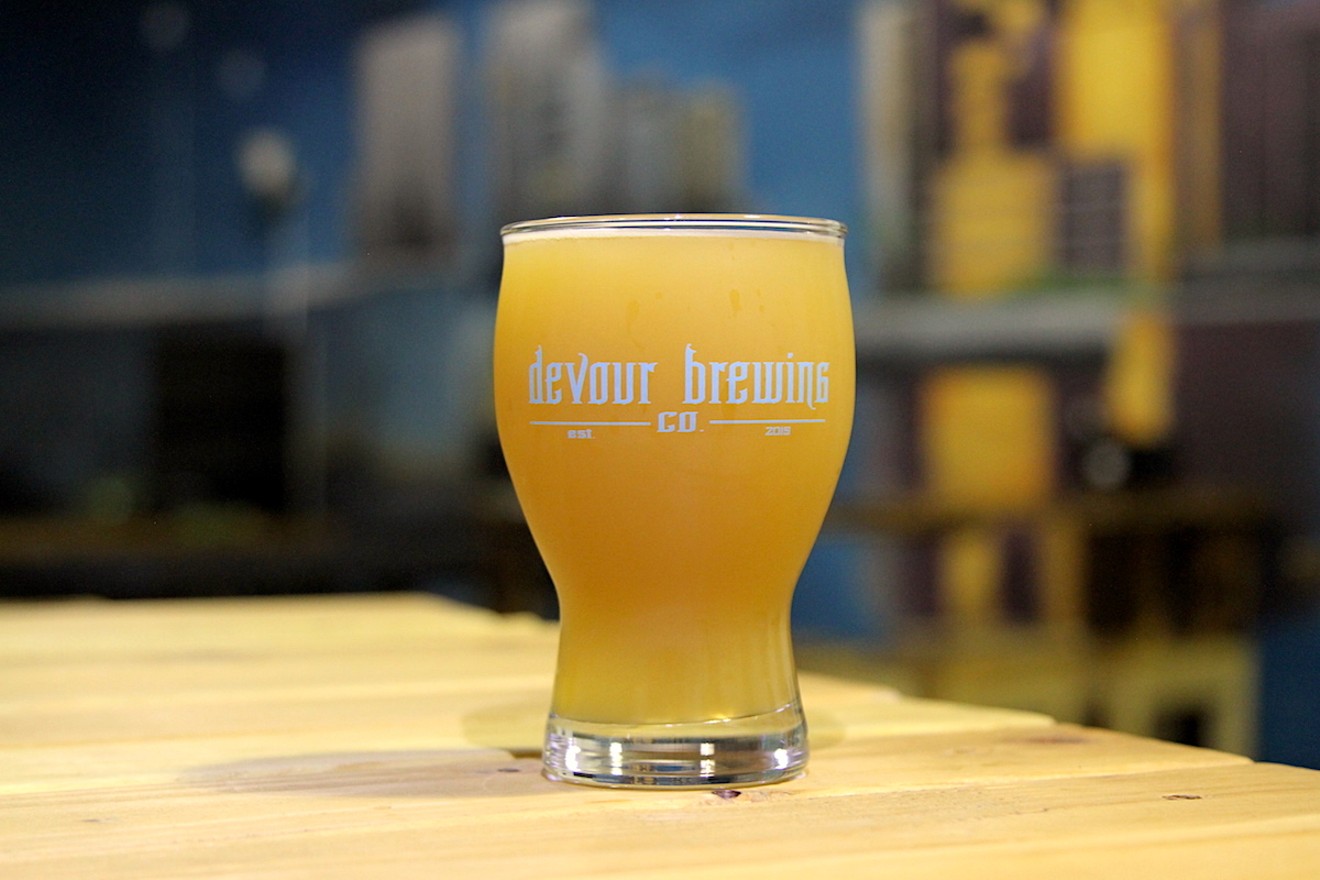 The Shadow Walker DIPA from Devour Brewing Company in Boynton Beach. Photo by Nicole Danna
This Thursday, August 3, beer lovers across the nation will honor National IPA Day, an official cheers to one of craft beer's most iconic styles.

Founded in 2011, IPA Day is a global celebration of hoppy beer made famous for its resiliency during long sea voyages by ship from England to India, hence the term IPA, short for "India pale ale." Today the holiday has expanded into a worldwide celebration boasting thousands of international IPA-themed events.

The Brewers Association recognizes only two types of IPA, the flagship style of the American craft beer movement: American IPA and imperial IPA (or double IPA, abbreviated DIPA), each brewed with American-grown hops known for their citrusy, bitter, piney aromas. But what makes a good IPA? Like so many beer styles, it's a matter of personal preference for most. Overall, however, it's generally a balance of hop-forward bitterness and malty sweetness supported by a strong hop aroma.
In South Florida, a number of breweries offer their own version of the IPA. Most recently, some brewers are also developing varieties infused with tropical fruits and flavors to reflect the regional climate.

Here are the ten most interesting IPAs from Miami-Dade to Palm Beach County. 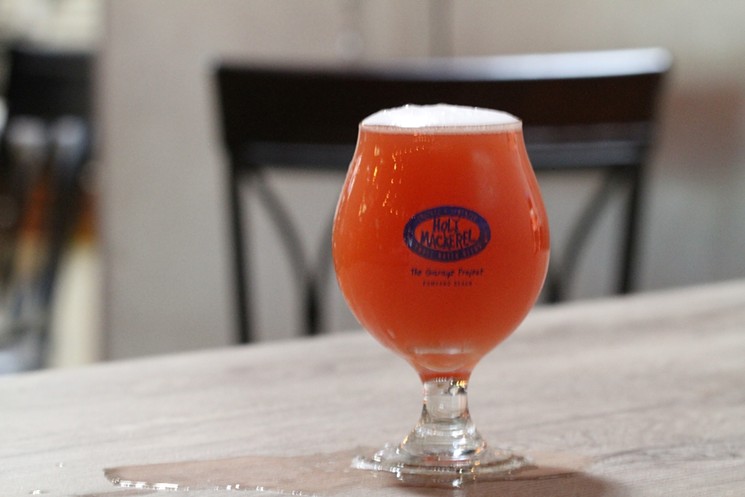 Pink Froyd
Nicole Danna
1. Pink Froyd, Holy Mackerel Brewing and Descarga Brewing Company. Rans of the Miami-based Descarga Brewing Company can get a taste of the soon-to-open brewery's beers at the Pompano Beach-based Holy Mackerel. For the next few months, locals can find Descarga head brewer Manny Jannes brewing alongside Holy Mackerel's Bobby Gordash. The two are creating some interesting riffs on a number of styles, including their most recent addition: a fruity pink IPA they've dubbed Pink Froyd. The IPA boasts a ton of citrus notes that scream ruby red grapefruit but, surprisingly, is really a combination of Cascade, El Dorado, and Citra hops (dry-hopped with even more Citra, Mosaic, and Chinook), giving the beer its flavor profile and zesty nose, while the blush of vibrant pink comes courtesy of ripe dragon fruit. 3260 NW 23rd Ave., Suite 400, Pompano Beach; 954-532-0196; holymackerelbeers.com. 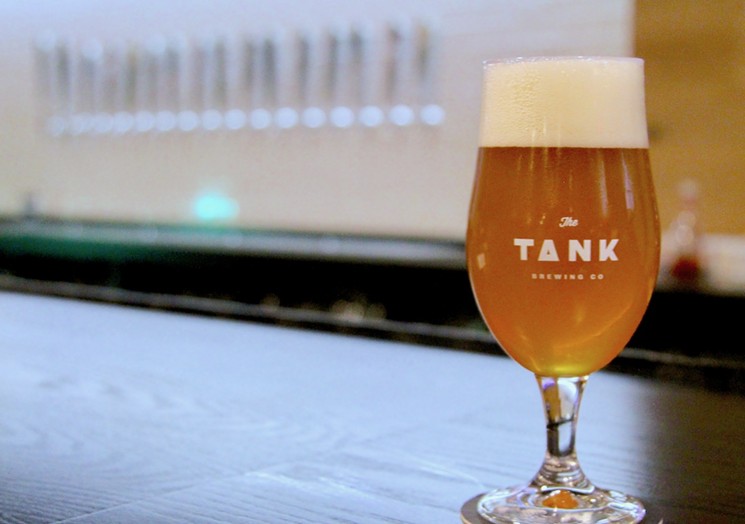 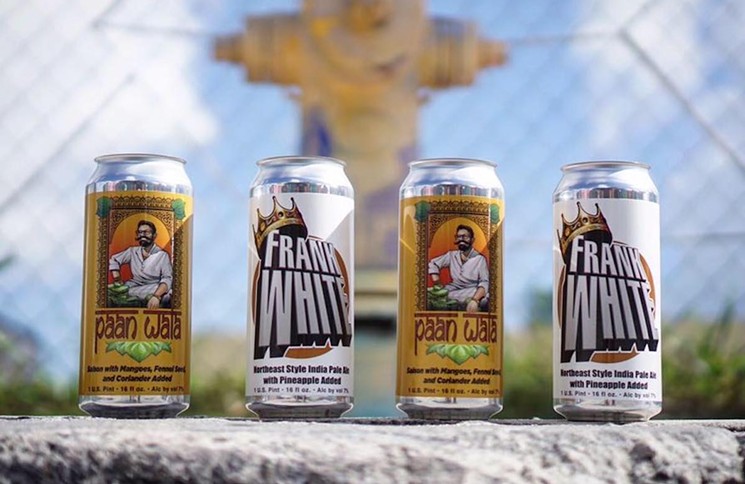 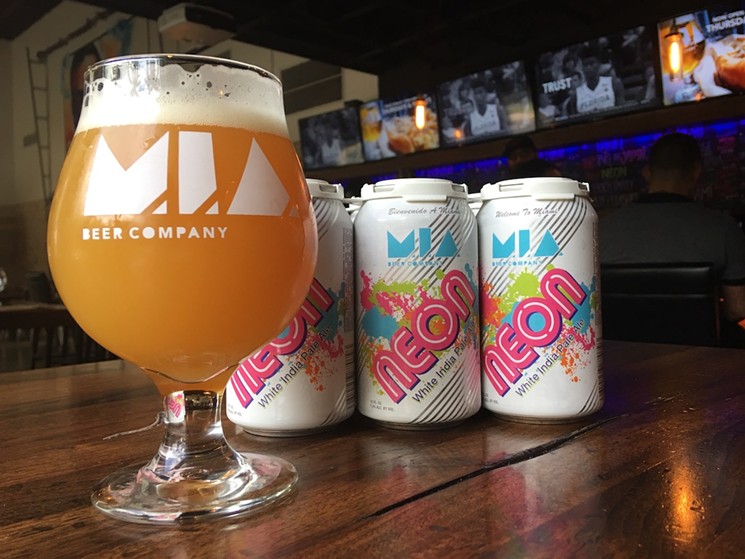 The Neon white IPA from MIA Beer Company in Doral.
Photo by Nicole Danna
4. Neon White IPA, MIA Beer Company. Neon was first brewed in September 2016 by Mike Demetrus, MIA Beer Company’s head brewer. Not many people know the recipe was inspired by another MIA beer, El Cuco, what began as a lighter version of today's stronger Neon, which clocks in at 7.5 percent ABV. This cloudy and citrusy wheat beer is brewed with Pilsner malt and white wheat, officially classifying it as a white IPA. The addition of the wheat gives the beer its cloudy haze. MIA founder Eddie Leon describes this specialty-style beer, which he recently began canning, as "juicy but without any juice." It's thanks to the use of only Citra hops, employed for both bittering and aroma and develops into a smooth, floral, and citrusy flavor. 10400 NW 33rd St., Doral; 305-567-5550; mia.beer. 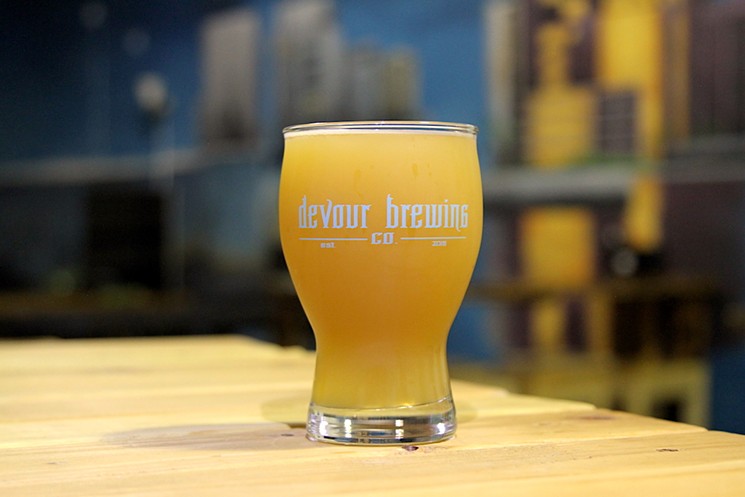 The Shadow Walker DIPA from Devour Brewing Company in Boynton Beach.
Photo by Nicole Danna
5. Shadow Walker DIPA, Devour Brewing Company. In Palm Beach County, Devour Brewing Company head brewer and owner Chip Breighner is producing a trio of Northeast-style IPAs that has hop heads flocking to his Boynton Beach taproom come release day. The lineup currently includes his Woolbright Pale Ale, Visual Chaos IPA, and Shadow Walker double IPA, each one an excellent example of an India pale ale. What sets Devour IPAs apart from others is Breighner's frequent use of hop varieties not often seen in the area's regional styles. That includes the 007 hops he uses in his longtime favorite, Mosaic to My Ears, a 70 IBU and 7 percent ABV IPA that gives IPA lovers an alternative to his Northeast lineup. You'll also find Belma and Vic Secret in his Visual Chaos, while the Shadow Walker DIPA packs the most punch, brewed with a combination of CTZ, Amarillo, Azacca, and Idaho hops, which deliver a full-bodied mouthfeel, beautiful golden haze, fragrant hop aroma, and a well-balanced bitter-to-malty backbone. 1500 SW 30th Ave., #4, Boynton Beach; 561-806-6011; devourbrewing.com.