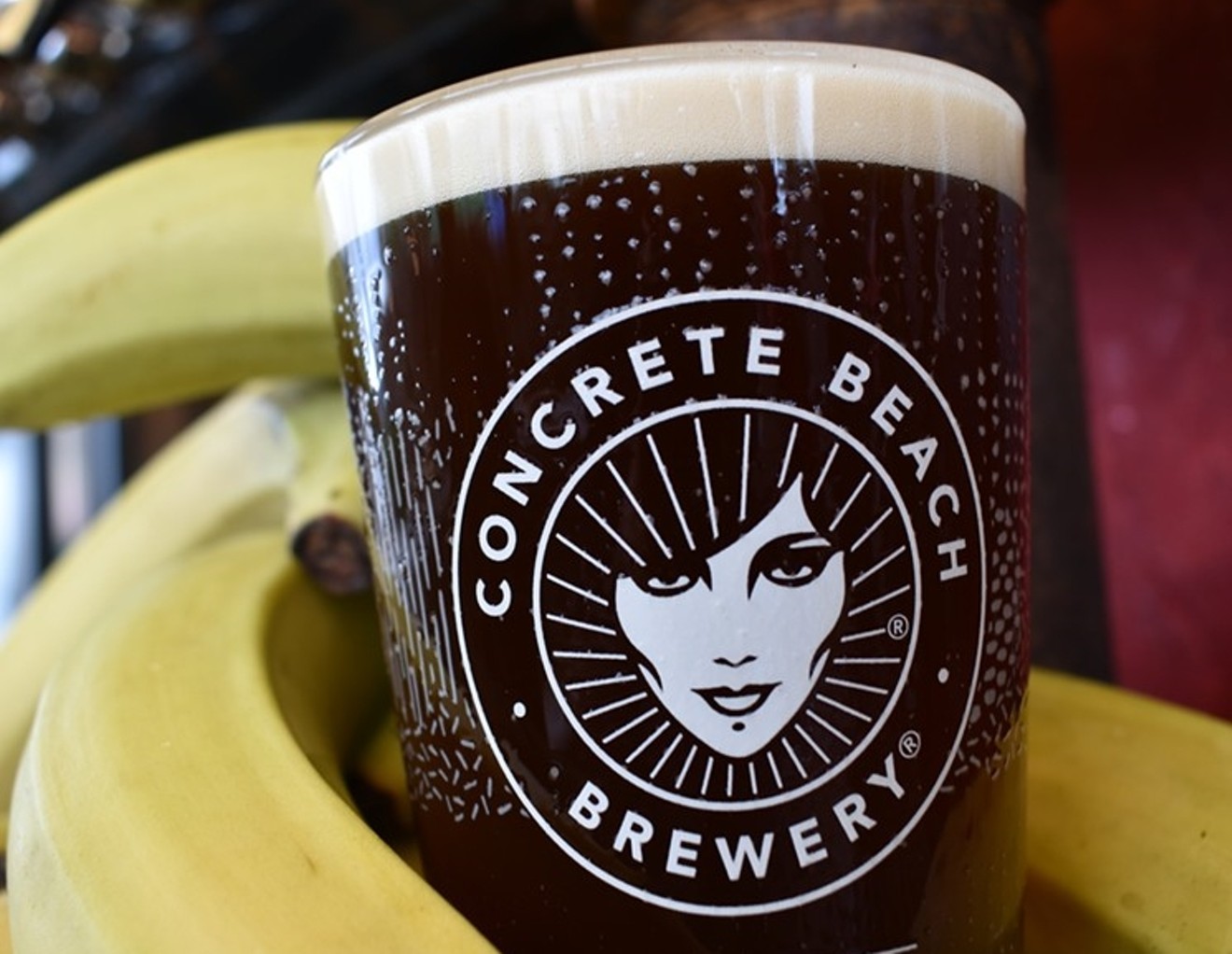 Plantainfest at Concrete Beach Brewery. Let’s be real: We all wish the maduro sides at Pollo Tropical were larger. But instead of hoping to change the unchangeable, we can get our sweet-plantain overload at Plantainfest. Jimmy’z Kitchen will sell plantain dishes, Azucar will peddle plátano maduro ice cream, and Conjunto Pepe Montes will play tunes, all in celebration of the release of Concrete Beach’s Plantain Pícaro, a sweet-plantain Dunkelweizen. And if you’re really serious about those banana cousins, sign up for the plantain-eating contest. One dollar of each special beer sold will be donated to the Unity Coalition. 8 p.m. Friday, October 13, at Concrete Beach Brewery, 325 NW 24th St., Miami; 305-796-2727; concretebeachbrewery.com. Admission is free. 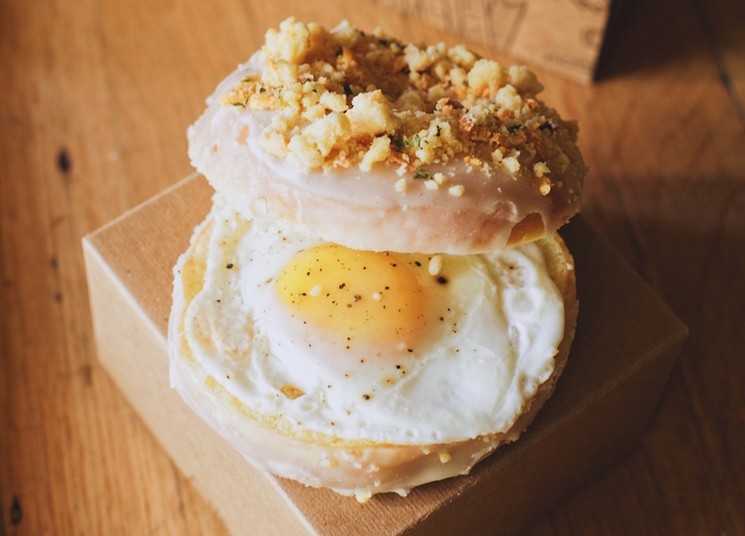 Courtesy of Salty Donut
Salty Donut, Coyo Taco, Fooq's, and Others at III Points 2017. III Points returns to Mana Wynwood this weekend with a charged lineup of acts and enough food to help power attendees through the three-day fest. For ticketholders already planning their schedules, we suggest taking a break from dancing to snag some sustenance from local favorites such as Panther Coffee, Bird & Bone, Talde, Coyo, Market, the Salty Donut, and Fooq’s. Here’s what’s on the menu at this year's III Points, and here are restaurants with late-night dining deals after the fest. Friday, October 13, through Sunday, October 15, at Mana Wynwood, 318 NW 23rd St., Miami; 305-573-0371; manawynwood.com. Tickets cost $125 to $345 via iiipoints.com.
Aaron Brooks and Lior Lev Sercarz Pop-Up at Dizengoff. Edge Steak & Bar chef Aaron Brooks and New York-based spice master Lior Lev Sercarz, who owns La Boîte, created a special hummus topping that will debut during lunch Friday. The two chefs will be at Dizengoff to introduce the topping, made with chermoula-roasted root vegetables, spiced lamb sausage, toasted walnuts, and a drizzle of harissa-tehina, which will be available for a week. The collaboration is a warmup for the duo's charitable dinner Friday night at the Four Seasons. 11 a.m. to 1 p.m. Friday, October 13, at Dizengoff, 250 NW 24th St., Miami; 305-573-9292; dizengoffhummus.com. Topping is available through Friday, October 20.

Courtesy of Edge Steak & Bar
Collab Dinner at Bahia. Lior Lev Sercarz, spice master and owner of the New York-based La Boîte, will join Edge Steak & Bar's Aaron Brooks to create a four-course Mediterranean-and-Miami-inspired meal. The one-night collaboration will take place at Bahia, the poolside restaurant and lounge at the Four Seasons in Brickell. Tickets cost $175 per person, which includes wine pairings, a special craft beer by J. Wakefield Brewery using Sercarz's spices, and a signed copy of Sercarz's book The Spice Companion. A portion of the proceeds from book sales and dinner tickets will go toward the Florida Disaster Fund and to the Anguillan Red Cross. 7 p.m. Friday, October 13, at Bahia at the Four Seasons, 1435 Brickell Ave., Miami; 305-381-3190; fourseasons.com/miami. Tickets cost $175 via eventbrite.com. 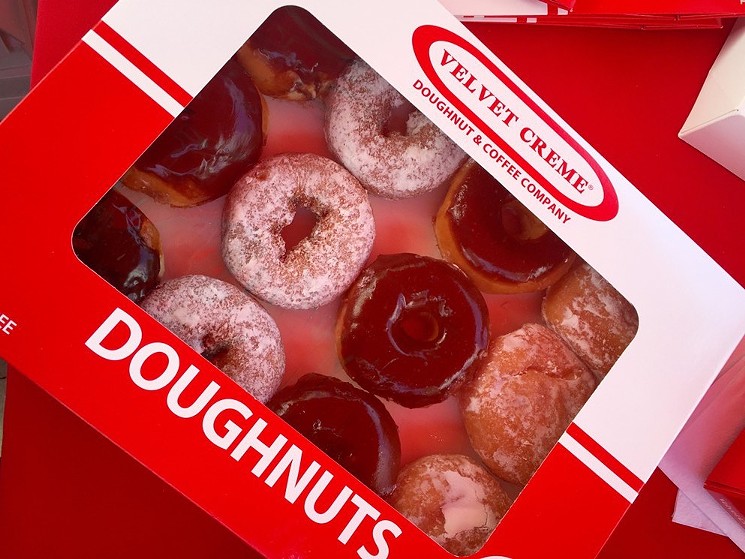 Courtesy of Velvet Creme Doughnuts
Velvet Creme Doughnuts Opens in Little Havana. After more than 17 years, Velvet Creme Doughnuts will officially reopen Saturday, October 14, in Little Havana, a few doors down from Ball & Chain. The debut marks more than two years since the iconic Miami doughnut shop, which first appeared in 1947, announced its revival. Expect a range of doughnuts — from traditional glazed and key lime to guava- or coconut-cream-filled ($1.19 and up) — a selection of coffees, including cold brew, along with milkshakes and soft-serve ice cream. In the morning, customers can also opt for an egg, cheese, and sausage or ham breakfast sandwich ($2.50 to $4) on a bagel, croissant, or glazed doughnut. 10 a.m. Saturday, October 14, at 1555 SW Eighth St., Miami; 954-609-0576; velvetcremedoughnuts.com. Ribbon-cutting ceremony begins at 10 a.m. Doors open at 10:30 a.m. Customers will receive a free box of a dozen glazed doughnuts with the purchase of a dozen doughnuts while supplies last. Velvet Creme merchandise, such as hats, mugs, and T-shirts, will be available at discounted prices.