A main course of lomo and grilled vegetables at El Toro Loco. Photo courtesy of El Toro Loco
Aldo Espinosa developed a passion for barbecue as a teenager. His parents worked long hours, and he often experimented in the kitchen by himself. Espinosa didn't go to culinary school, but he managed to travel around the country trying different meat-cooking styles while holding several jobs in Miami's hospitality and nightlife industry.

In 2014, Espinosa set up a food truck in front of Florida International University's campus in Sweetwater with a menu based squarely on meat options. Served quickly and affordably, his offerings appealed to the local crowd, and the Cuban-American entrepreneur pressed ahead with his goal to make the half-million dollars he needed to open his own restaurant.

His labor paid off.

Today, his El Toro Loco steakhouse has four brick-and-mortar locations, including the original on Tamiami Trail, which he runs with his sister, Mara. In addition to the flagship, Espinosa's friends and family run brick-and-mortar franchises in Westchester, the Hammocks, and Kendall, along with four food trucks.

Espinosa employs about 200 people, and according to the brand's business-development manager, Jessica Gonzalez, despite the COVID-19 pandemic, requests for franchises continue to come in. Espinosa has set up a distribution center in Doral to centralize food production and ensure a consistent experience across all outlets.

"I went into this business with no experience in restaurants, just a liking for great barbecue," Espinosa tells New Times. "That actually served us well, because we created our own system. There's nothing nonsensical about what we offer. It's basically what people want to eat, served in a nice atmosphere at a reasonable price." 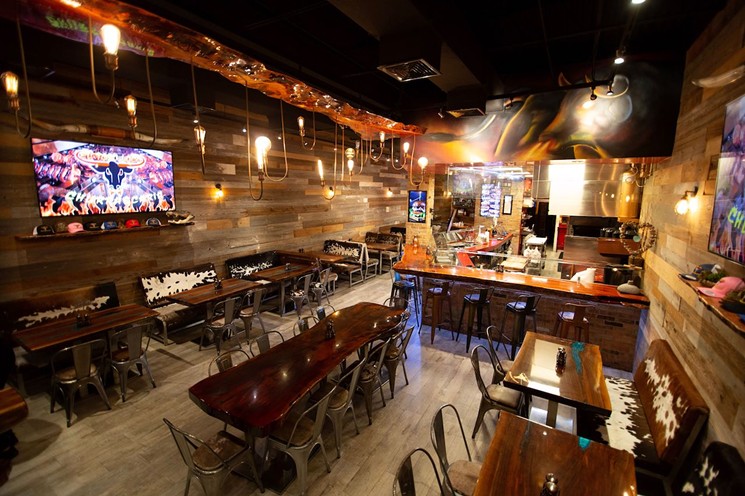 Photo courtesy of El Toro Loco
The dining rooms are adorned with weathered brick and wood on the walls, mahogany Cuban wood tables, and benches upholstered with cowhide that Espinosa handcrafts with his father, Nicolas.

Appetizers include tostones topped with lechón and signature Toro Loco sauce ($10.99) manchego croquetas served with guava sauce ($8.99); and pork belly cooked in a reduction of teriyaki, barbecue, and soy ($10.99).

Along with mint and berry lemonades by the glass and pitcher ($5.99 to $16.99), the eatery also features a list of natural juices and wines, draft and bottled beer, and craft cocktails such as cava white sangria ($11.99); a passionfruit mojito ($10.99); and a Bahama Mama, a concoction of Rhumbero Superior rum, coconut, fresh pineapple, and orange juice with a sweet cherry reduction ($9.99).

Since the coronavirus outbreak, Espinosa has set up an in-house marketplace at the flagship eatery, offering raw meats, frozen goods, and essentials such as gloves and face masks, also available for delivery through UberEats.

In the short term, El Toro Loco is set to open a Little Havana outpost next spring and a quick-service concept, El Toro Loco Express, featuring self-service kiosks and a rapid order-entry system, in 2021. Espinosa is actively working on expanding his franchise model to the East Coast and hopes to put two or three other restaurants into development in the next six to eight months.

"We keep growing, but we're an integrated network and still operate as a close-knit family business," he says. "We work together to make sure that from our varied clientele to the franchisees, everybody is getting a good return."

El Toro Loco. 13800 SW Eighth St., Miami; 786-717-7020; eltorolocochurrascaria.com. Monday through Saturday 9 a.m. to 11 p.m., Sunday 9 a.m. to 10 p.m.
KEEP MIAMI NEW TIMES FREE... Since we started Miami New Times, it has been defined as the free, independent voice of Miami, and we'd like to keep it that way. With local media under siege, it's more important than ever for us to rally support behind funding our local journalism. You can help by participating in our "I Support" program, allowing us to keep offering readers access to our incisive coverage of local news, food and culture with no paywalls.
Make a one-time donation today for as little as $1.
Juliana Accioly
Contact: Juliana Accioly