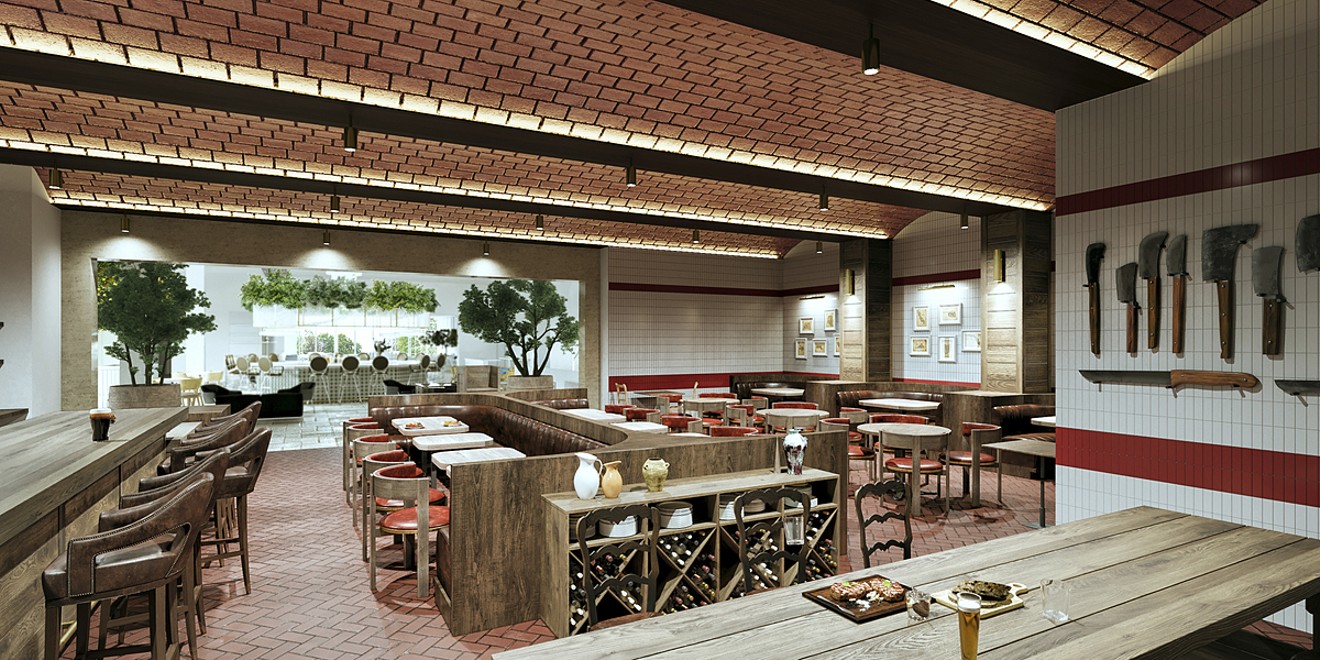 Inside La Centrale, the Italian restaurant Carne, inspired by the rustic decor of the Chianti region, includes a butcher shop. Courtesy of La Centrale

Jacopo Giustiniani picks up a clay brick from a stack and gestures toward a vaulted ceiling. "These are the same tiles used to reconstruct the Brunelleschi's dome on the Duomo of Firenze," he says, referring to the 13th-century main church of Florence, Italy. Then the lean 37-year-old, clad in a white button-down shirt and faded jeans, gestures around the room, straining to be heard over the sounds of hammering, drilling, and welding. He tucks a stray black curl behind his ear and points to a worker on scaffolding who's painstakingly cementing each brick into place by hand.

Such is the workmanship going into La Centrale, a massive, three-story food hall at Brickell City Centre that will bring the sights, sounds, and tastes of Italy to Miami. The 40,000-square-foot project will house 14 dining areas and marketplaces that will include an espresso bar, a cocktail bar, a wine cave, and minirestaurants ranging from grab-and-go to fine dining.

It will take about seven years to recoup the $30 million investment, says Giustiniani, who, along with co-managing partner Matthias Kiehm, plans to expand La Centrale to other cities. "The idea is not to make money with this one, but to open a few," Giustiniani says. He sees food halls as a next step in the evolution of shopping malls. "Everyone can shop on their phones now. There are around 2,000 malls that are suffering, and there's a need for developers to fill up that square footage."

"People are looking for a certain quality [and] want to support local businesses."

When it opens in early 2018, La Centrale will be the first of at least a half-dozen food halls under construction in Miami-Dade. Some of the others are Time Out Market in South Beach, St. Roch Market in the Design District, and the Citadel in Little River. It's a risky business. Success depends upon many factors, including location, business acumen, and luck. Whether Miami's economy and palate take to the food hall concept remains to be seen. This horse race will likely have only have a few winners. 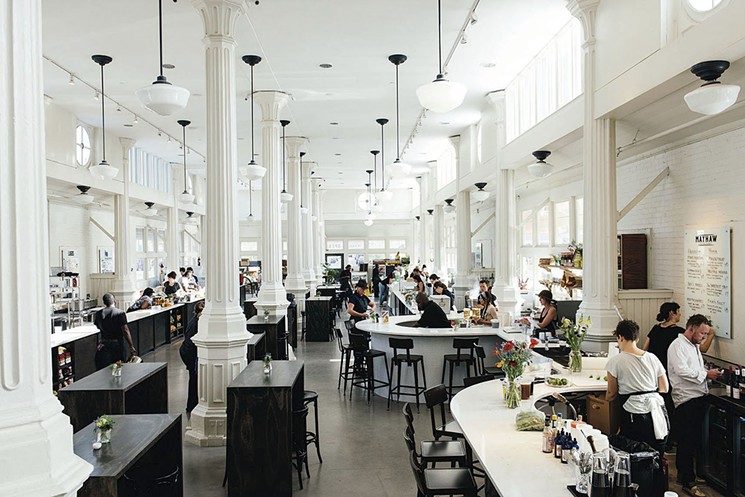 The beauty of the food hall is choice. If you want oysters and your friend craves brisket, you can both be sated. The concept has a lengthy history. At Philadelphia's Reading Terminal Market, New York's Chelsea Market, and Seattle's Pike Place Market, locals and visitors have long shopped for fresh produce and eaten in a lively, communal setting. The catalyst for the contemporary food hall movement might be Italian businessman Oscar Farinetti's Eataly, which debuted in Turin in early 2007. Three years later, Eataly New York City opened in a partnership with celebrity chefs Mario Batali, Lidia Bastianich, and Joe Bastianich. The 50,000-square-foot establishment in New York was embraced by diners who sometimes waited hours for a chance to buy pastas, eat wood-fired pizza, and purchase produce from a "vegetable butcher." Today, Eataly has locations in Boston, Chicago, and New York, as well as an online market.

The food hall trend has recently spread to smaller cities. In the past year, Stanley Marketplace, boasting 50-plus vendors, opened in Aurora, Colorado. A converted body shop in Baltimore was turned into R. House, with ten chefs plying gourmet fare. And culinary superstar Anthony Bourdain plans to open his very own Asian- night-market-themed food hall in New York City.

In Miami's Design District, St. Roch Market (Palm Court, 140 NE 39th St., Miami) partner Will Donaldson says the 10,000-square-foot concept will corner the market in affordable dining in the tony neighborhood without sacrificing quality. "I want to provide an opportunity to aspiring line chefs and sous-chefs," he says.

Donaldson and business partner Barre Tanguis operate a St. Roch in New Orleans. There, they took over a market built in 1875 that was damaged during flooding in 2005. The 12-vendor Miami market will blend some things that work in NOLA — coffee, salad, a raw bar, and a beverage program — with local chefs in the remaining spaces. "If you want to open a restaurant on the beach, you're looking at a $3 million investment," Donaldson says. "There are very few people that can scrape up the capital to do that." 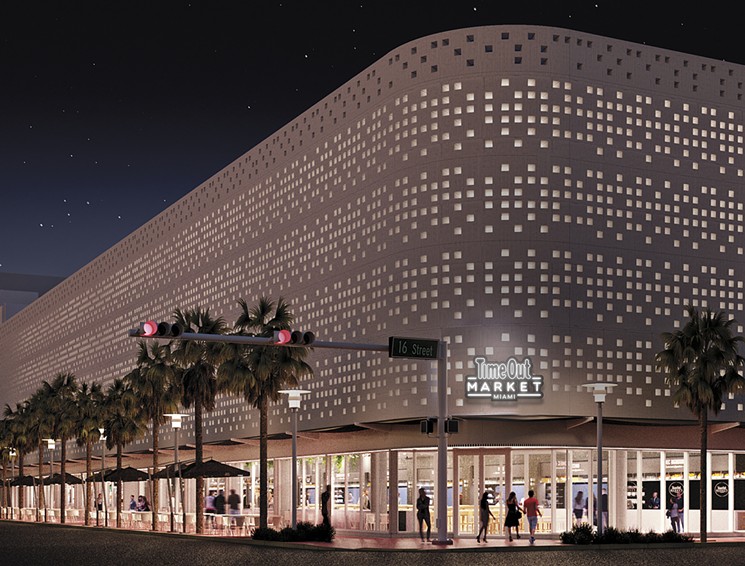 Donaldson says a chef who wants to join St. Roch needs to invest about $20,000. "We're taking away the financial risk and giving the chef an actual dining environment... It's the magic of the food hall. We're not chasing the trend. We're using the trend."

The Citadel (8300 NE Second Ave., Miami) might be the biggest gamble in Miami's food hall lineup. The 10,000-square-foot venue is being developed by Conway Urban Real Estate and Urban Atlantic Group. It has a promising lineup of tenants, including omakase sushi master Myumi and Cake Thai, but it's located in an area that has yet to gentrify. This market, unlike the ones in South Beach and Brickell, will have to rely heavily on residents from nearby communities such as Miami Shores and El Portal.

Partner Nick Hamann, a commercial real-estate investor with engineering and law degrees, believes if he builds it, they will come. "Even if you don't know what you want, you'll walk in and have something amazing," he says.

Hamann wants to fill all 17 tenant spaces with locals. "We are specifically seeking out operators that have done this locally before," he says, adding the Citadel will be a culinary incubator when it opens in 2018. "People are looking for a certain quality [and] want to support local businesses."

Hamann and his partners also own the building across the street that serves as a cultural, artistic, and work space. "We feel like we have enough of a critical mass that once the Citadel is delivered, people will come here as a destination," he says. With a radio station set to move into the neighborhood and Sherwood's Restaurant & Bar nearby, the area has seen an increase in foot traffic. "We will be talked about, and we are creating — or at least highlighting — the destination," he says.

On South Beach's Lincoln Road, which is dominated by big retailers such as Apple and Lululemon, Time Out Market (1601 Drexel Ave., Miami Beach) will debut sometime in 2018. So far, heavy-hitters such as Michael Pirolo, Jose Mendin, Coyo Taco, Wynwood beer and brew spot Kush, Jugofresh, and Paradigm Kitchen have signed up for one of 17 rotating spots at the 17,474-square-foot food hall and market. Chefs won't have to shell out any money to start. The market will provide cooking areas, communal dining spaces, and the added draws of local art and three cocktail bars; in return, it will share the restaurants' profits.

The market will be connected to Time Out, part of a national group of guide books and magazines, which will help curate the restaurants and chefs. The first Time Out Market opened in Lisbon in 2014. A conditional lease agreement has been signed for a London location, and one is set to open in Boston in 2019.

Giustiniani went all in on the project, moving with his wife and children to Miami in April so he could get a read of the city's culinary temperature. "I think one of the main mistakes that developers make is that Miami is not New York or London," he says. "Compared to Miami, New York is easy. You get a three-star review from the New York Times and you've got a start. In Miami, it may take years, but if you get inside the community and it picks you, it can work."

The food hall entrepreneur admits this is his largest project, but he's willing to wait it out. "Developers have invested billions of dollars in Miami. You have to have the shoulder and the patience to see it through."

Walking through the nearly complete halls of La Centrale, Giustiniani inspects some Italian marble destined to line the market's aperitivo bar. "I think there are about 4.5 million people in Miami," he says to himself. "If I can get just 10 percent to come to La Centrale, I'd be very happy. Besides, Rome wasn't built in a day."