The recent opening and speedy popularity of Hank & Harry's (1691 Michigan Ave., Miami Beach; 305-763-8107), a modern New York-style deli, marks somewhat of a resurgence in Miami's long deli history (along with proof of hunger for a quality pastrami sandwich). Created by Miami-based restaurant group Sliderz MG, Hank & Harry's whips up breakfast, lunch, and dinner in a 1,200-square-foot space on Lincoln Road.

"My offices have been off of Lincoln Road for more than five years," says Buzzy Sklar, owner of the burger chain Sliderz and former owner of Burger & Beer Joint. "There isn't a casual option to get a soup and a sandwich anywhere near here even though there used to be so many delis in this area."

Hank & Harry's opened about a month ago and celebrated its official grand opening yesterday with a ribbon-cutting ceremony. It has already drawn a stream of regulars, mostly nearby business professionals and residents, as well as tourists.

"We've gotten really lucky," Sklar says. "All we did was open the doors, and we've seen an enormous outpour of support." 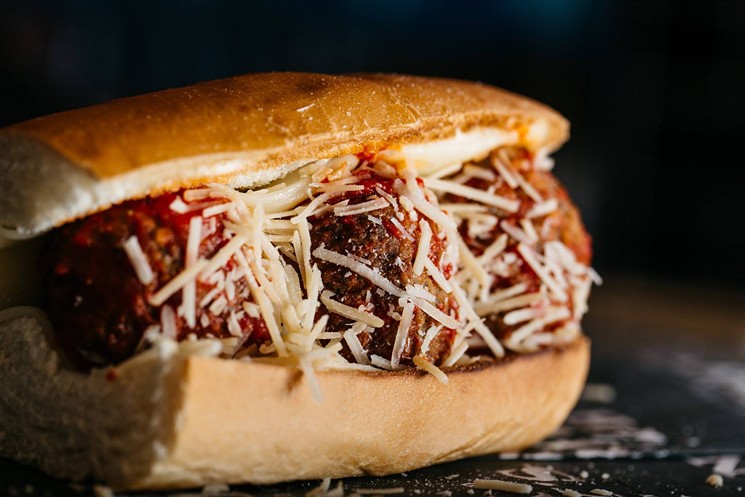 Deli staples are blended with Italian sandwiches such as a meatball sub.
Courtesy of Hank & Harry's
The menu pairs a hodgepodge of traditional Jewish deli plates — such as corned beef and pastrami sandwiches ($12), knishes, house-made bagels and cream cheeses ($1.50 to $3), and black-and-white sugar cookies ($1.50) — with Italian favorites such as hot Italian sandwiches and meatball subs ($10). The restaurant also offers custom-built salads, soups, burgers, and hot dogs, as well as java from Panther Coffee ($3 to $6).

"We're trying to add a modern twist on a traditional deli," Sklar says. "We took a New York deli and mixed it with an Italian deli and built off of that."