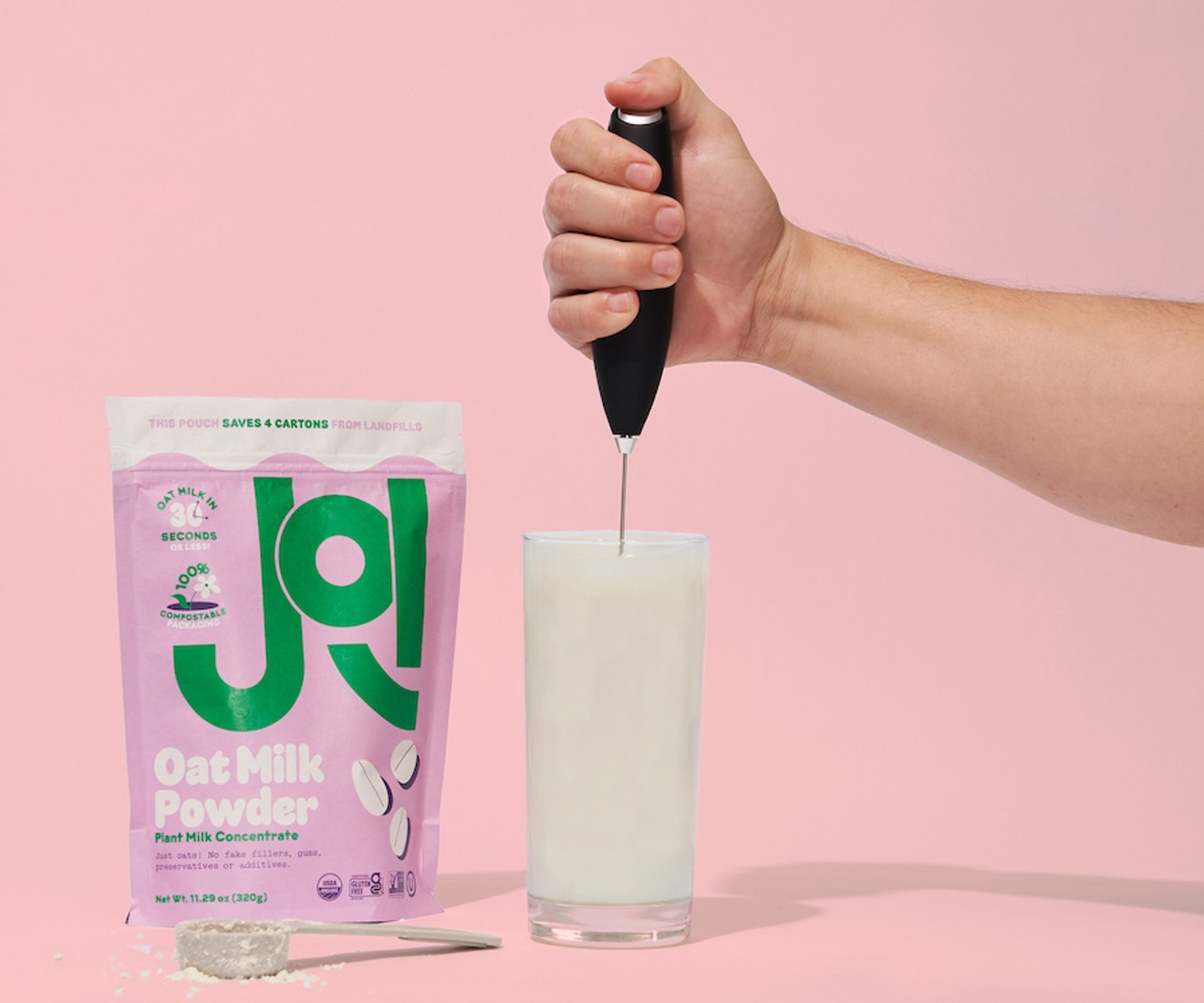 Joi powdered oat milk is the first dairy alternative to come in fully compostable packaging. Photo courtesy of Joi
A global shift to a plant-based diet is widely touted as a top priority in the fight against climate change. It stands to reason, then, that sustainably packaged plant-based products will go even further in the race to go green.

With this in mind, the creators of Joi, a Miami-based plant milk brand, have introduced fully compostable packaging to their environmentally conscious product line.

The idea that sparked Joi came to cofounder Tony Jimenez in 2015. The Miami native was in search of a winning idea for the capstone project required by his MBA program, and as he perused the dairy-alternatives aisle at the supermarket, it came to him.

"The milks were full of gums, emulsifiers, and water," he tells New Times via Zoom. "There was almost none of the featured ingredient in them."


Jimenez thought he could do better.

A decade earlier, he had begun moving toward a plant-based diet he hoped would stave off the high cholesterol and cardiovascular diseases that plague both sides of his Cuban-American family tree. As he shifted away from animal products and retrained his palate, he felt inspired to experiment in the kitchen. He had an affinity for nut-milk recipes in particular.

"I was that weird kid making plant-based milks at home, like, all the time," Jimenez confesses.

Armed with this experiential knowledge, he aimed to create pods of concentrated, single-ingredient plant milk. The consumer could plug these into a Keurig-like machine at home and – voilà! Fresh almond milk with all the nutrition of the whole food – and minus the fillers.

Jimenez invested three years into the idea. Eventually, though, it became clear that forcing consumers to buy a dedicated almond milk blending machine would be too big a hurdle for a startup to clear. So Jimenez, who in the meantime had teamed up with Hector Gutierrez – fellow Miami native, longtime friend and alumnus of food brands from Burger King to Jugo Fresh – and two like-minded cohorts from his MBA program, decided the best almond-milk mixing machine was the one most people already have in their homes: a blender.

With this revelation, everything fell into place. The Joi team perfected its almond milk base using a temperature-controlled grinding technique to maintain nutrient content – one of the big differentiators between Joi and, say, nut butter makers.

They scrapped the pods and instead sealed the product into 15-ounce plastic tubs, each of which makes the equivalent of about three half-gallon containers sold in grocery stores. This cut the amount of packaging required by 85 percent. Moreover, this reimagining greatly reduced carbon emissions from shipping, since the tubs were many times more stackable than traditional, crushable tetra packs, and eliminated the need to ship huge amounts of water. (Store-bought almond milks are reputed to contain 98% water.)

"We are a sustainability-first company. There's no waste in the manufacture, since consumers get to use the entire nut, seed, or grain. We minimize waste in the supply chain, because we have manufacturing locations on both coasts and we're not shipping around water," Gutierrez says. "We trust our consumers can introduce water in their own kitchens as they see fit."


Joi's concentrated form gives consumers added flexibility in the kitchen. The pastes can be folded into a creamy tomato risotto, whipped into an avocado dip, or transformed into dairy-free condensed milk, as the company's recipe page suggests.

Still, there were those plastic tubs.

"Plastic was easily accessible and at a low cost," Gutierrez said. "As a startup, we needed the cheapest iteration at the beginning so we could get in front of people and move people from one way of doing things to another."

After achieving profitability last year, the company was able to heed customer requests for a shift to pricier glass containers, which are more readily recyclable than plastic (though they come with their own environmental challenges). The new jars should start shipping in early November.

"As we grow, we keep reinvesting in sustainability," says Gutierrez.

And company growth has been healthy, even through the pandemic.

"It was actually an incredible boost," Gutierrez says. "Everyone was looking for healthy alternatives and couldn't go to the grocery store. Since our product is shipped direct to the consumer and is shelf-stable, we were able to benefit while helping our customers through this craziness."

Joi is also sold to foodservice providers — about 300 of them in nearly 40 states, according to Gutierrez. Locally, those restaurants include Threefold Cafe and Under the Mango Tree. And, as an exception to Joi's direct-to-consumer model, its products are sold at zero-waste grocer Verde Market.

A price comparison on the Joi website indicates the products are a better value than grocery store brands, but that may not always hold up. At press time, a half-gallon of Silk almond milk costs around $3.71 at Miami grocery stores. It would cost about $5.92 to make the equivalent with Joi. Premium brand Califia, however, costs about $6.04 for the same amount of milk. All things considered, the product appears competitive. The company also offers bulk tubs, bundles, and a subscription club that can lower costs.

The Joi team sent New Times a pack of its almond milk base and oat milk powder for sampling. The almond base whipped up to a satiny, neutral-flavored liquid that gave coffee a creamy, elevated flavor. It tasted richer than typical almond milks, likely because the nut's healthy fat is retained (along with the fiber and nutrients).

With the oat milk, adding the powder to water in an already whirring blender resulted in a flawless texture. The resulting liquid tasted lightly sweet – a surprise since oats are the sole ingredient. On the whole (no pun intended), it seems the hype about Joi is to be believed.

As its website states, Joi plans to put some of its steady gains toward achieving net zero carbon emissions by the end of 2022.
KEEP MIAMI NEW TIMES FREE... Since we started Miami New Times, it has been defined as the free, independent voice of Miami, and we'd like to keep it that way. With local media under siege, it's more important than ever for us to rally support behind funding our local journalism. You can help by participating in our "I Support" program, allowing us to keep offering readers access to our incisive coverage of local news, food and culture with no paywalls.
Make a one-time donation today for as little as $1.
Camille Lamb Guzman is a journalist who writes on wellness, travel, and culture. She is also finishing a book of creative nonfiction.
Contact: Camille Lamb Guzman