Last evening, nearly a thousand people braved the summer heat and rain to gather at the Miami Beach Botanical Garden for a celebration of John Lermayer and his life.

Fellow bartender Julio Cabrera, clad in a T-shirt printed with a photo of the late Sweet Liberty mixologist, prepared perfectly made daiquiris, along with shots of rum, to toast his friend. Major culinary players such as Michelle Bernstein, Brad Kilgore, Jon Nguyen, and Jeff McInnis offered comfort in the form of food.

Miami's hospitality royalty shared hugs, tears, and laughter as friends remembered the man with songs, jokes, and stories of both extreme mischief and extreme kindness. Many attendees revealed that they wouldn't even be in the industry if not for Lermayer's mentorship. Miami hospitality guru Josh Wagner summed up the evening when he noted Lermayer had "passed from having an enormous heart." 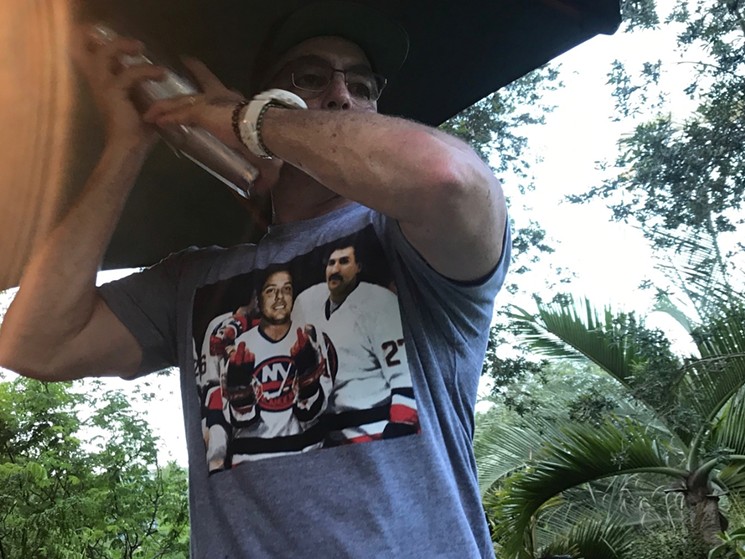 As the South Beach sky turned from bright pink to blue, City of Miami Beach Commissioners Michael Gongora and Micky Steinberg declared June 21 — the first day of summer — John Lermayer Day. It was a fitting remembrance for a man that brightened so many lives through his laughter, encouragement, or even just a well-made drink.

The celebration of life for John, as it was called, was extended by an hour while many people walked to the bar Lermayer shared with partners Dan Binkiewicz and David Martinez to continue trading stories through the night.

Today Lermayer and his team have received more kudos with the announcement of the Tales of the Cocktail 12th-annual Spirited Awards finalists.

The South Beach bar is also a contender in the World’s Best Spirits Selection category, facing Atlas (Singapore), the Office (Chicago), and Whitechapel (San Francisco) for the prize.

Sweet Liberty won a Spirited Award in 2016 for Best New American Cocktail Bar. Last year, it was up for two awards, and Lermayer was a finalist in the American Bartender of the Year category. In a New Times interview, the bar man was quick to point out that the more significant category, to him, was Best American Bar Team. "It's about the servers, the cooks, the runners, the bartenders, and the management. There's great joy in announcing they've been recognized as the best in the world."

Dan Binkiewicz, Lermayer's friend and business partner, found joy from sorrow in these past two days. "John would have been so happy," he said, noting that the original John Lermayer Day proclamation would be presented to Lermayer's son Radek, with a second one to be displayed at Sweet Liberty.

Binkiewicz said he was also reserving space on the bar's wall for a plate or two he's hoping to take home from the upcoming Spirited Awards to be held this July in New Orleans. "We want to bring home at least one award. This year it's for John."

A GoFundMe campaign has been set up as a college fund for John Lermayer's son, Radek. So far, nearly $90,000 of the $100,000 goal has been reached. To contribute, visit gofundme.com.
KEEP MIAMI NEW TIMES FREE... Since we started Miami New Times, it has been defined as the free, independent voice of Miami, and we'd like to keep it that way. With local media under siege, it's more important than ever for us to rally support behind funding our local journalism. You can help by participating in our "I Support" program, allowing us to keep offering readers access to our incisive coverage of local news, food and culture with no paywalls.
Make a one-time donation today for as little as $1.