Rendering of La Centrale. Courtesy of La Centrale
Miami is getting its very own Italian food hall. La Centrale is slated to open this fall inside Brickell City Centre. The name was revealed earlier this week, along with some other details about the three-story, 38,000-square-foot concept.

"Unlike other food halls, La Centrale will have a very restaurant-forward approach with truly authentic options that replicate the Italian lifestyle. We will focus on introducing new Italian eateries, cafés, restaurants, and different atmospheres for everyone to enjoy throughout the day," Giustiniani says via email. In addition to the restaurants, Giustiniani says, the hall will feature an expansive wine section, a gelato shop, a cooking school, and a cocktail bar.

The restaurateur and his partner chose Miami for their concept because they felt there was a need for it in South Florida, and they believe the city's international visitors will be a great way for their hall to gain global exposure. What's more, Giustiniani and Kiehm like that Miami is accepting of new cultures. Opening inside the sprawling indoor-outdoor Brickell City Centre was a logical move for the entrepreneurs.

"We hope to be the 'center of the Centre,' as our name suggests," Giustiniani says. "One of Brickell City Centre’s core pillars is to introduce new concepts into the U.S., and we are honored to be a part of this initiative. As the new mecca of the South, we feel Brickell City Centre will drive the right foot traffic to La Centrale." 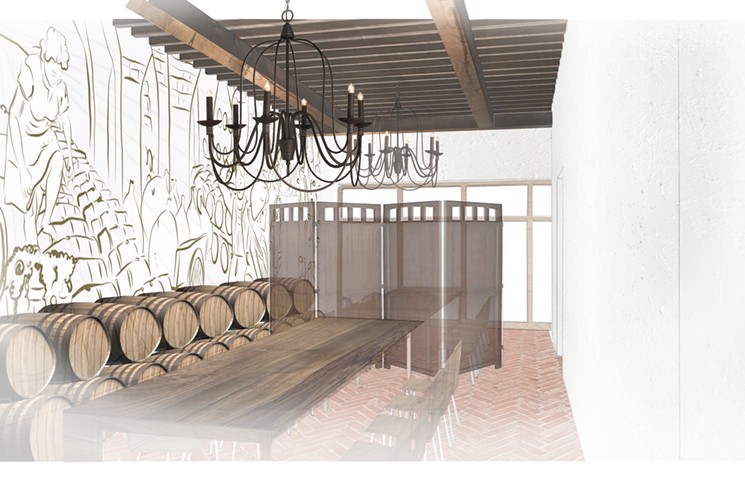 Courtesy of La Centrale
The hall is inspired by the 20 prominent regions of Italy, and La Centrale’s architecture and decor reflect the diversity of that country. The ground level will be a place to get a fresh-brewed espresso, breads, house-made pastas, and other Italian culinary staples for the home cook. There will also be a casual communal-style eatery. The second floor will feature original multicourse restaurants offering traditional Italian fare for lunch and dinner. There will be a fish spot, a meat restaurant, and a seasonally inspired eatery. Visitors will also find a cocktail bar in an Apulian-inspired indoor garden.

Finally, the third floor will offer guests interactive winetastings, pairings, and food programs led by Italian wine experts. This level will also be home to La Centrale’s culinary school, which seeks to connect visitors with Italian chefs so the average person can learn how to prepare authentic Italian meals at home.

"We are confident La Centrale will be successful because of the unique experience, service, and authenticity it will bring to Miami. True Italian food is easy to eat every day and incorporate into any time of the day," Giustiniani says.

Courtesy of La Centrale
La Centrale's culinary director has yet to be announced, but Giustiniani says they are looking for someone who "lives and breathes the Italian culture." Giustiniani's family owns a winery in Tuscany, and he's been learning the business for most of his life. In 2006, he moved to the United States to become the wine buyer for SA Hospitality Group. Kiehm has spent most of his career in worldwide directorial and managerial roles with Four Seasons Hotels & Resorts in Los Angeles, Boston, Chicago, and Sharm El Sheikh, Egypt. He was also the business director of the London department store Harrods, where he developed and opened 12 restaurants at Harrods Food Hall.

KEEP MIAMI NEW TIMES FREE... Since we started Miami New Times, it has been defined as the free, independent voice of Miami, and we'd like to keep it that way. With local media under siege, it's more important than ever for us to rally support behind funding our local journalism. You can help by participating in our "I Support" program, allowing us to keep offering readers access to our incisive coverage of local news, food and culture with no paywalls.
Make a one-time donation today for as little as $1.
Valeria Nekhim was born in the Ukraine and raised in Montreal. She has lived in Manhattan and Miami. Her favorite part of food writing is learning the stories of chefs and restaurateurs.
Follow:
Twitter: @valerianekhim