The Undefeated Saison Photo courtesy of Funky Buddha
Fifty years ago, the 1972 Miami Dolphins became the first team in NFL history to finish a season undefeated. The urban legend since then has been that members of that 14-0 Super Bowl team meet each season to crack open a bottle of champagne and celebrate the first loss of the final undefeated team every year.

Unfortunately, that story has been recently debunked as untrue. But there is a bona fide, long-standing South Florida tradition associated with the occasion that does include some bubbly – Funky Buddha’s annual release of its Undefeated Saison brew, a beer made in honor of that legendary team.

Since 2013, Funky Buddha Brewery has cracked the classiest, and possibly most petty beer of them all, waiting to release the limited-run Undefeated Saison only after the final team in the NFL loses its first game, ensuring that the 1972 Dolphins record will stand alone another year.

The Belgian-style ale is brewed with grape must that has been aged in Chardonnay barrels and bottles conditioned with Champagne yeast, giving it an aroma and taste that smacks of celebratory vibes.

According to Ryan Sentz, cofounder of Funky Buddha Brewery, Undefeated Saison was never considered a long-term tradition, but rather, a fun experiment.

“When we first made Undefeated Saison we were brewing 30 gallons at a time and had no delusions of opening a production brewery,” Sentz tells New Times. “It just started as a name from one of my brewers who was also a Dolphins fan and we liked the play on words.” 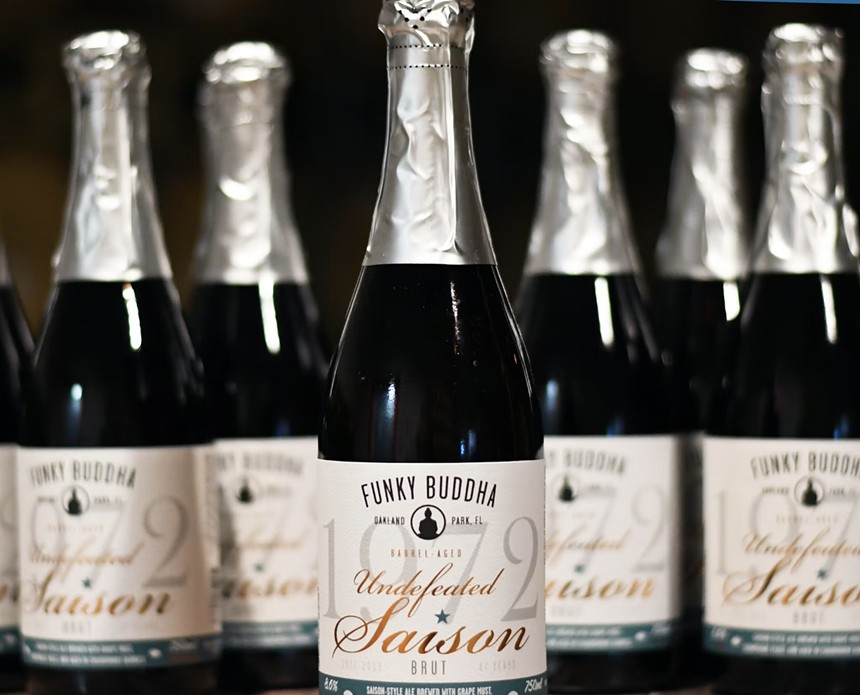 Luckily for fans of the beer, Sentz says the possibility of an earlier-than-usual release is something the team has prepared for, and there won’t be a delay between the first Eagles loss and Undefeated Saison hitting shelves exclusively at the brewery.

“A few years back I decided to look at NFL history to see when the earliest we’ve seen the last undefeated team go down,” Sentz says. “I think the earliest it has happened is week four once or twice, so we always try to have it ready by then.”

Asked if his team has cooked up anything special in the brew to commemorate the 50th anniversary of the undefeated '72 Dolphins team, Sentz jokes that this beer's yeast has been specially infused with DNA extracted from old uniforms of players on the ‘72 roster, before admitting the fan-favorite recipe is unchanged.

Until the Dolphins' first loss of the season in week four, Sentz and the Funky Buddha team were faced with an interesting predicament as to what would happen if the Dolphins were the last team to lose a game. Seeing as it would be a bit odd to celebrate a loss by the franchise ultimately being celebrated, he says things would have gone a bit differently.

“Thankfully, that wasn’t a decision we had to make,” Sentz says. “But we have decided we wouldn’t release it if that were the case. That would be a weird thing to celebrate.”

As for the Dolphins' chances this year, Sentz says, as usual, he has high hopes.

"I’m an eternal optimist when it comes to the Dolphins," Sentz says."There haven't been many years in the past 30 seasons where I wasn’t hopeful on some level. This season, I believe we're a strong playoff team."

Undefeated Saison will be released exclusively at the Funky Buddha Brewery located at 1201 NE 38th St., Oakland Park. For more information follow the brewery on Twitter.
KEEP MIAMI NEW TIMES FREE... Since we started Miami New Times, it has been defined as the free, independent voice of Miami, and we'd like to keep it that way. With local media under siege, it's more important than ever for us to rally support behind funding our local journalism. You can help by participating in our "I Support" program, allowing us to keep offering readers access to our incisive coverage of local news, food and culture with no paywalls.
Make a one-time donation today for as little as $1.