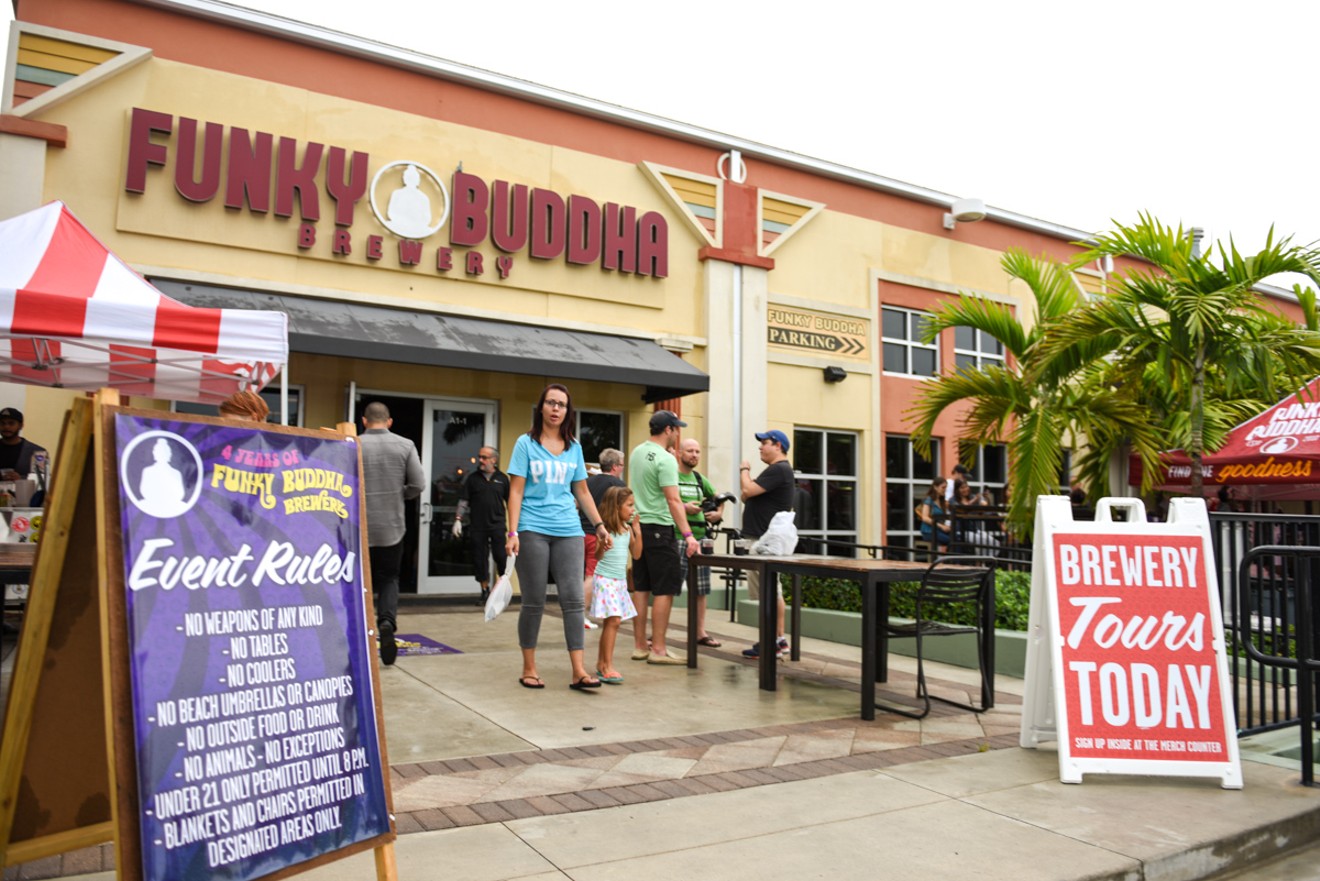 Courtesy of Funky Buddha
Funky Buddha Brewery, a Broward-based pioneer in the local beer scene, has been sold to Constellation Brands, an international beer, wine, and spirits maker from New York that also owns the Corona label.

The news was announced today following months of rumors that the Oakland Park brewery was in talks with the company. Funky Buddha joins the Constellation portfolio, which also includes such brands as Ballast Point, Robert Mondavi, and High West Whiskey.

New Times reached out to Funky Buddha founder and head brewer Ryan Sentz, who referred questions to brewery brand director John Linn. Funky Buddha has been eyeing opportunities to expand for a number of years, Linn says, and the brewery saw a path for growth with Constellation. "They're the one expert company at crafting exceptional brands. They have a tremendous amount of marketing knowledge."

Sentz founded Boca Raton's Funky Buddha Lounge as a homebrew supply store and bar in 2010. Then in 2013, Funky Buddha expanded to a full-production brewery. The facility is one of the largest in South Florida at 54,000 square feet. It has a brewing capacity of 45,000 barrels.

Nothing about the brewery will change, including its standard of brewing, says Linn (who is a former New Times staffer). Employees from Constellation and Funky Buddha will work together, with Ryan and KC Sentz still running the day-to-day operations.

Funky Buddha will be part of Constellation's new Craft Beer and Specialty Group, which focuses on high-end beer brands, says Constellation spokesperson Jamie Stein. The brewery will receive access to benefits such as a network of distributors far beyond Florida. According to its website, Constellation is the third-largest beer company in the United States with more than 100 brands, 40 facilities, and 9,000 employees.

Constellation has been eyeing Funky Buddha for some time, Stein says. "They have a great brand, great presence, great beer, and great culture."

Gradually, Funky Buddha will begin releasing its beers into new markets across the United States, but both Linn and Stein say the first priority is Florida.

One of the brewery's biggest events, the Maple Bacon Coffee Porter release party, which is held each January, will still happen, even though the beer entered distribution earlier this year.

"Now we have an opportunity to grow; we'll definitely be expanding into new states and markets," Linn says. "It won't be overnight. We don't have firm plans for any market yet."

It's the second brewing company in South Florida to be included in a larger beer company. Last December, the Craft Brew Alliance purchased a 24.5 percent stake in Miami's Wynwood Brewing Company.

The terms of the sale between Funky Buddha and Constellation weren't publicly disclosed.