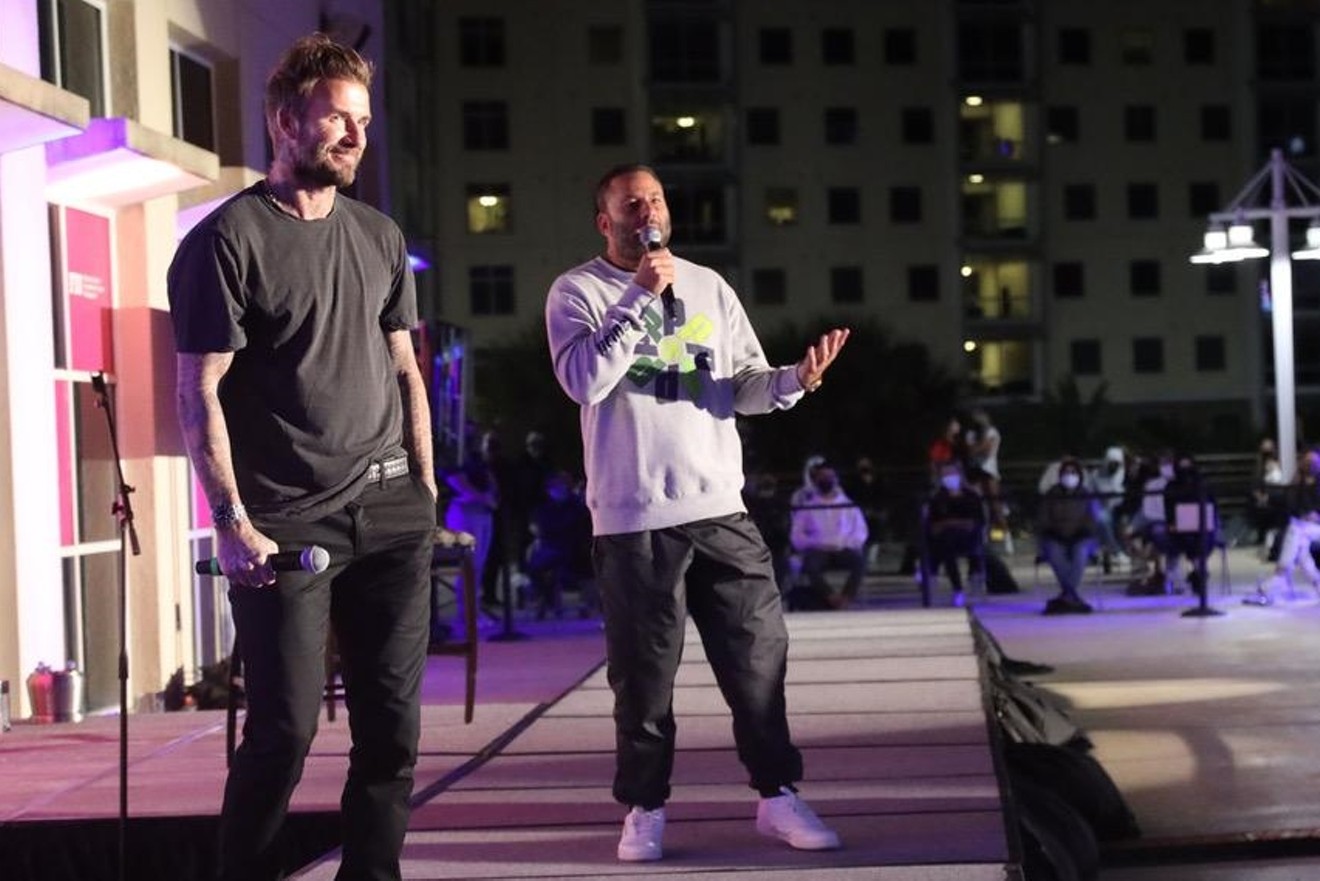 David Beckham and David Grutman talk entrepreneurship and soccer at FIU. Photo by World Red Eye
For David Grutman, like everyone else, the past year has had its challenges and rewards.

The entrepreneur, once known as the nightclub king, continues to diversify his portfolio to include hotel owner with the imminent opening of his joint venture with Pharrell Williams, the Goodtime Hotel. His restaurant trifecta in the Firestone Garage on Alton Road is slated to open at the end of this month, gathering Winker's Diner, Sushi Fly Chicken, and Toothfairy under one roof. Still, his nightclub LIV remains closed.

Grutman has also returned to Florida International University's Chaplin School of Hospitality & Tourism Management to teach his course in entrepreneurship, "The David Grutman Experience: The Class."

COVID-19 has changed the way the course is presented. Instead of seven sessions, there are five, and social-distancing guidelines have shrunk the class capacity from 200 to around 140. All attendees must fill out an online COVID questionnaire before entering campus.

Oh, and the class is conducted outdoors.

Grutman and his team managed to transform the rooftop of the university's Kovens Conference Center into a stage complete with colored spotlights and a hot pink step-and-repeat. Velvet ropes — the kind you'd see in a nightclub — create sections for social distancing. Students are seated six feet apart from one another and wear masks during the class.

David Beckham addresses FIU students.
Photo by World Red Eye
Even on an unseasonably chilly evening, the students gave a warm welcome to the man who promises to teach Miami's next generation of restaurateurs and nightlife impresarios how to succeed.

First step: Build a brand. "I sell a lifestyle to people," Grutman shared.

Building his own brand was as important as building his brick-and-mortar endeavors, he elaborated, but the key to that isn't merely posting glamorous selfies. Grutman, who posts as many Instagram photos of himself cuddling his daughters as pics hanging out with Pharrell, said, "My coolness is that I am uncool."

He stressed the importance of public relations. "If I was starting a car wash, I would want a PR team to share all the crazy cars that I cleaned."

Then he quipped that he hoped the students had been taking notes, "Because you're going to forget everything I said when I bring out my guest: David Beckham."

Beckham, who has been in Miami since Christmas to prepare for his Inter Miami CF soccer club's sophomore season opener, fielded questions about everything from why he chose Miami for his team ("Have you seen this place? It's a lifestyle! It's passion!") to what he misses about London ("I do miss the gray days sometimes. I miss the weather").

Beckham said the eight-year road to finally starting his soccer club in Miami wasn't always easy, but that he made a commitment to build up soccer in the United States while he was still a footballer. "Two days after I retired from soccer, I flew to Miami. Since then there have been many obstacles, but to achieve things, sometimes it takes time. This was always about building a legacy for me."

Among the toughest transitions for Beckham when moving to the United States? Calling his sport "soccer" instead of "football." Said Beckham: "I still forget and people here have to ask me to clarify which game I'm talking about."

When someone asked about the halting process of his proposed soccer stadium, Miami Freedom Park, he quipped that he shouldn't have taken "just one more question." Beckham didn't go into details about the status of his plan to construct a 25,000-seat soccer stadium on the site of the city-owned Melreese golf course, but he did say that he would get it done.

Then, in a city fueled by lazy beach days and debauched nights, he emphasized that there is no shortcut to success.

"It's all about hard work and dedication," Beckham said. "When I was 14, my peers were hanging out. I didn't have many friends. I needed to sacrifice."
KEEP MIAMI NEW TIMES FREE... Since we started Miami New Times, it has been defined as the free, independent voice of Miami, and we'd like to keep it that way. With local media under siege, it's more important than ever for us to rally support behind funding our local journalism. You can help by participating in our "I Support" program, allowing us to keep offering readers access to our incisive coverage of local news, food and culture with no paywalls.
Make a one-time donation today for as little as $1.