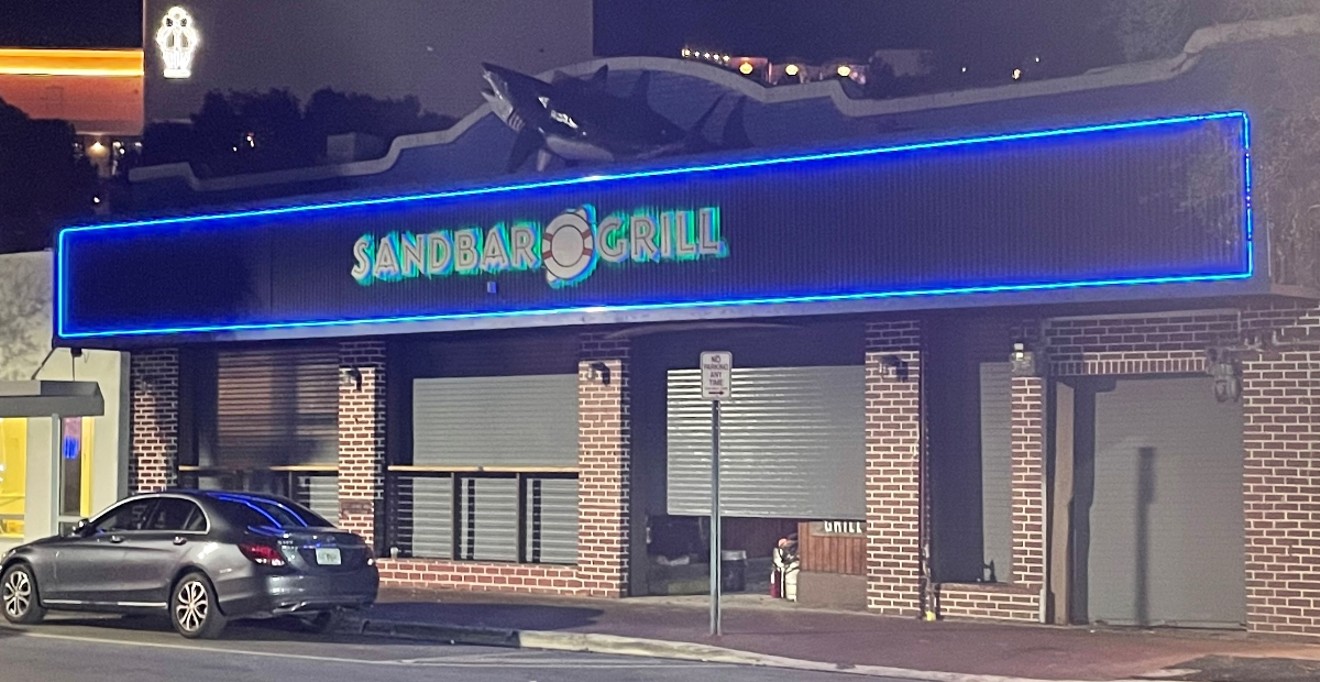 The restaurant and sports bar had closed after the government shutdown of dining rooms in March 2020 and was ready to pivot to a takeout-only concept when a fire in the kitchen scotched the plan.

Two days into takeout-only service, owner Mike Perrin got a call from his general manager saying Sandbar was on fire.

"Our kitchen was incinerated and there was smoke damage throughout the restaurant," Perrin tells New Times.

Fortunately, the fire started after hours, when no one was in the building on Grand Avenue in the Grove's downtown area. The fire burned so hot that it melted the PVC water pipes, which extinguished the blaze, saving the century-old structure.

Still, when he arrived and saw the damage, Perrin was devastated.

"My heart just sank to the floor, but it would have been a lot worse if the pipes hadn't melted. Our building is one of the oldest in South Florida," says Perrin, who estimates that the building was constructed somewhere between 1909 and 1913.

Perrin resolved to rebuild. The challenge was to update the Sandbar's features without sacrificing its nautical charm.

The result is a brighter Sandbar with many of the iconic fixtures receiving a freshening up — including the giant shark and lifeguard chair.

Blue-and-white walls with reclaimed-wood accents impart a Key West vibe, while giant video walls allow patrons to catch their favorite games in style. Perrin himself updated the bar, which will feature an ocean scene with sandbars in epoxy — and smartphone-charging stations.

"We wanted people to sit down outside and have fun. Outdoor seating is key now," Perrin notes.

Perrin wanted to keep the menu the same but couldn't resist a few newtweaks, including a fries basket with a trip of dipping sauces.

"One of my hobbies is cooking, so we're going to change a few things," he says.

The bar will pour 40 beers on draft plus a tap for prosecco, along with hard seltzers. Cocktail favorites like the "Category 5" hurricanes and "Sandbar-ritas" will return, along with bottomless mimosas on Sundays.

Perrin has slated his grand Grand Avenue reopening for this Friday, April 9. "We may open for lunch but will absolutely be open for happy hour," he promises.

For the time being, the Sandbar will open daily at lunchtime and close around midnight despite the recent lifting of Miami-Dade County's curfew.

Perrin says he's also holding off on the bar's 20th-anniversary celebration, which was on the calendar last year before COVID and the fire interceded.

He's just happy to be back.

"I feel like we just want to start being normal, for now."

Sandbar Sports Grill. 3064 Grand Ave., Coconut Grove; 305-444-5270; sandbargrove.com. Open 11 a.m. to midnight daily.
KEEP MIAMI NEW TIMES FREE... Since we started Miami New Times, it has been defined as the free, independent voice of Miami, and we'd like to keep it that way. With local media under siege, it's more important than ever for us to rally support behind funding our local journalism. You can help by participating in our "I Support" program, allowing us to keep offering readers access to our incisive coverage of local news, food and culture with no paywalls.
Make a one-time donation today for as little as $1.