When it opens in November, expect MiamiCentral to resemble the curated experience at C3's newly-opened Citizens ManhattanWest (pictured here). Photo courtesy of Citizens
The food hall at Brightline's Miami station is set to reopen with a roster of famous international chefs.

Set to launch in November, MiamiCentral will be home to a number of new restaurants from big names including Dario Cecchini, Dani García, and Masaharu Morimoto, all of whom will be offering on-the-go eats via the 16-stall food hall inside the Miami Brightline terminal.

The word comes after the high-speed rail line's announcement of its reopening schedule set to launch next month, when Brightline service resumes between Miami, Fort Lauderdale, and West Palm Beach. As the flagship South Florida station, the Miami complex has become a hub for transportation, leisure, dining, and business.

A large part of the relaunch includes the unveiling of Citizens MiamiCentral — formerly known as Central Fare — and its new vendor lineup. The evolution arrives thanks to a recent partnership with Creating Culinary Communities (C3), a tech-based company created by Sam Nazarian, who also founded SBE, a company that develops, manages, and operates hotels, residences, restaurants, and nightclubs around the world.

Citizens is Nazarian's brand for two other large-scale food halls similar in scope to MiamiCentral: the newly opened Citizens ManhattanWest and an outpost coming soon to Seattle. 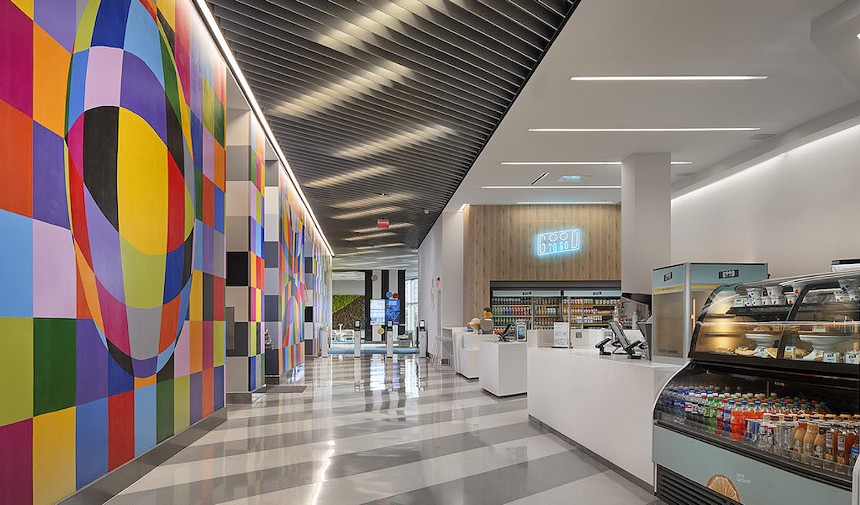 A rendering for a portion of the Citizens MiamiCentral.
Photo courtesy of Citizens
In Miami, Nazarian hopes to grow C3, which operates 250 ghost kitchens, 15 digital restaurant brands, and the Citizens Go app, a delivery app that allows for multiple brand items to be placed via a single order.

When the opportunity arose to work with Brightline, Nazarian says he jumped at the chance to relaunch the high-speed rail's culinary center.

“I’ve kept a close eye on Brightline as an inspiration for my innovation and development goals with C3," he tells New Tmes. "I see this development as one that will change the landscape of downtown Miami as a hub for all things transportation, leisure, lifestyle, business, and entertainment."

The six-block development serves as the flagship station for Brightline South Florida. The multiuse space houses retail, dining, and entertainment establishments, 816 luxury residences, and direct access to multiple modes of transportation including Metromover, Metrorail, and Tri-Rail.

C3’s roster of international chefs include Dario Cecchini (Antica Macelleria Cecchini), Dani García (Lena, Dani, and others), and original Japanese Iron Chef Masaharu Morimoto. Each will offer their own take on international flavor to Brightline passengers and the surrounding Miami communities.

MiamiCentral Station. 600 NW First Ave., Miami; 305-395-7883; miamicentral.com.
KEEP MIAMI NEW TIMES FREE... Since we started Miami New Times, it has been defined as the free, independent voice of Miami, and we'd like to keep it that way. With local media under siege, it's more important than ever for us to rally support behind funding our local journalism. You can help by participating in our "I Support" program, allowing us to keep offering readers access to our incisive coverage of local news, food and culture with no paywalls.
Make a one-time donation today for as little as $1.