Photo by FujifilmGirl
Sherwood's Bistro & Bar, a new restaurant on NE Second Avenue and 83rd Street, takes its name from Sherwood Forest. That is not only Robin Hood's merry hangout but also a subdivision of the Village of El Portal.

And like the nearby community that bears its name, Sherwood's is charming, slightly idiosyncratic, and steeped in the area where it's located.

The partnership that started the concept includes Barclay Graebner, a Miami Shores resident who opened Morgan's restaurant — and the new place has the pleasant, airy feel of that Wynwood brunch institution. Filled with antiques and covered with large windows, Sherwood's has an open feel perfect for a summer evening. A bar in the back that includes a veranda and a patio is also delightfully cool. A piano promises live music.

Photo by FujifilmGirl
The menu is comfort food, and prices are high for the neighborhood but not out of line for a restaurant of this quality. There is a solid beer selection, including several local brews (although there was no Funky Buddha on a recent night) and a reasonable wine list.

The meal begins with wonderfully crusty French bread and cheese from a huge wheel that gives the dining room a pleasant, homey vibe.

Starters include a chorizo and tomato salad with feta ($10), a bistro salad with frisée, egg, and pancetta ($8), a daily crudo served with jalapeño vinaigrette ($16), and flatbread with caramelized onion, arugula, and a choice of Gorgonzola cheese or triple cream ($12). The Sherwood's salad, a nice mix of greens and soba noodles, was better than average, though the noodles were a tad overcooked. 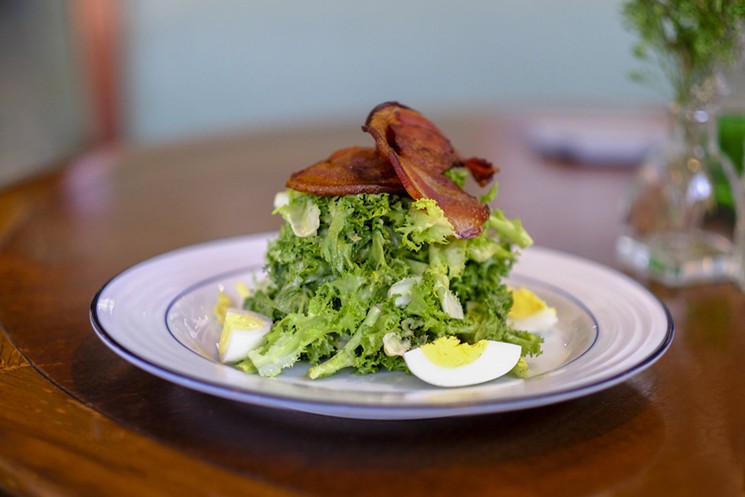 The bistro salad ($8)
Photo by FujifilmGirl
Among entrées, the steak frites ($18) was a beautiful meal with fries that were, strangely, the highlight, though the meat was perfectly cooked and well seasoned. A Florida grouper with greens and eggplant smear ($26) was moist and flavorful. A rabbit potpie ($18), one of the more interesting-sounding items on the menu, was less impressive, more like soup than a hearty winter meal.

There is also a good collection of desserts ranging from coconut sugar plantains to a recommended milk tart, both $8.

The daily crudo ($16)
Photo by FujifilmGirl
The group that opened Sherwood's also includes Richie Effs and Steve and Liesel Harivel, who also started Acme Lounge in Omni and the Wynwood Annex. It is all part of a rather rapid expansion.

Sherwood's is a happy addition to a neighborhood starved for good restaurants. It is a precursor to the Citadel, the food hall that is slated to open across the street next year. All of this activity will likely transform the northern edge of Little Haiti in ways both expected and unexpected.