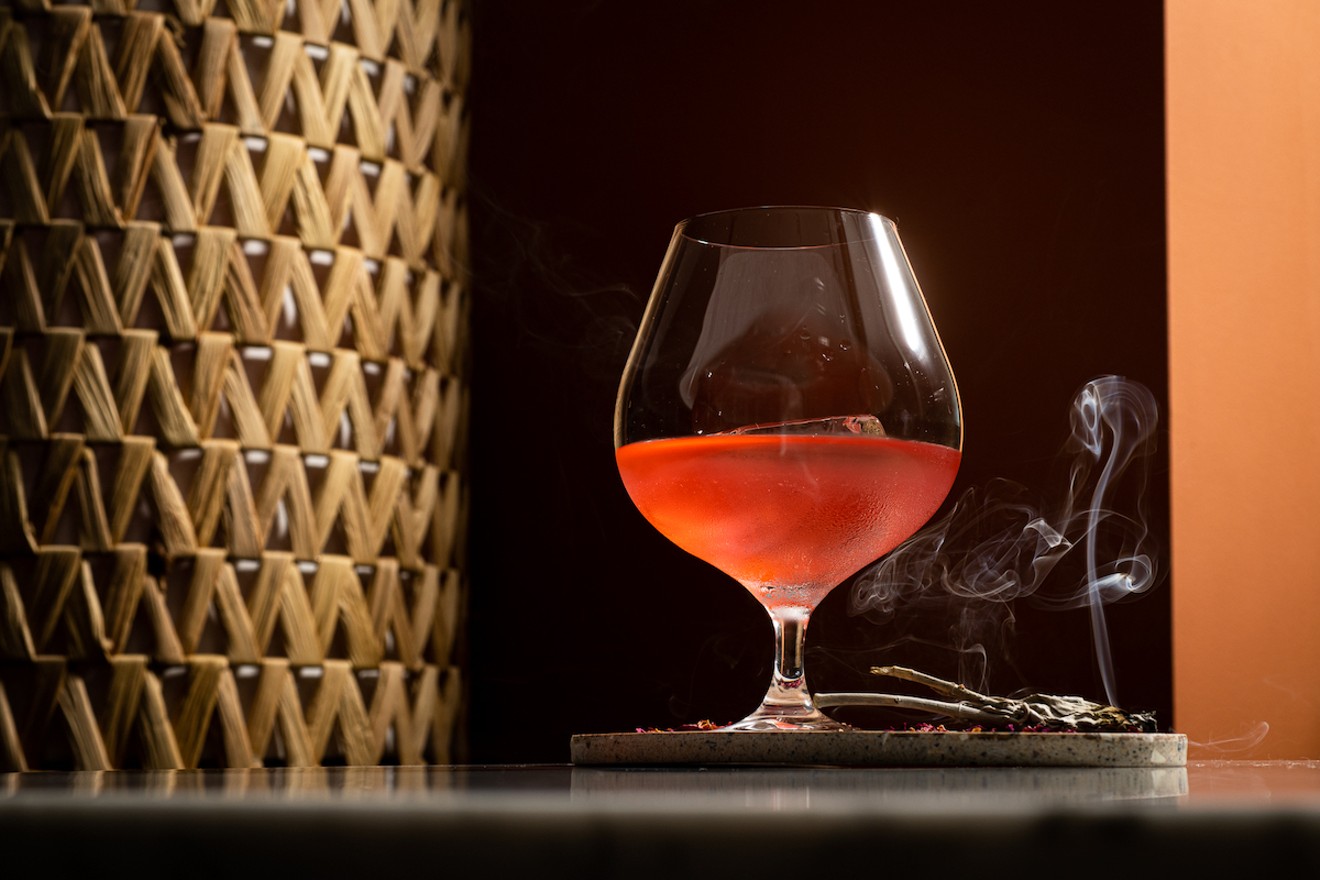 "Theobroma Cacao" cocktail Bar Lab photo
When Miami's Bar Lab shared the philosophy behind the group's latest concepts with its global beverage director, Christine Wiseman, she immediately knew what to do.

"Recently, I started a new technique of meditating before I get into the creative process, clearing my head to allow different ideas, colors, sights, and smells to come to me," Wiseman tells New Times. "I take down keywords — like Florida and brasserie — and get to work."

A hospitality veteran known for catapulting Miami's cocktail scene to national stardom in 2009 with the opening of three-time "Top 50 Bars in the World" winner Broken Shaker, Wiseman has since gained worldwide recognition working as a finalist for American Bartender of the Year 2020 and has been featured by Food & Wine, GQ, and Jimmy Kimmel Live.

Today, her work can be savored at Bar Lab's growing portfolio of establishments, from Hoja to Margot Natural Wine Bar.

While they're all projects that offer guests a taste of something unique to the concept, Wiseman says her work for MaryGold's Florida Brasserie and Higher Ground, Bar Lab's new establishments in partnership with Miami chef Brad Kilgore at the Arlo Wynwood hotel, presents a taste of her most creative cocktails to date.

"I wanted Higher Ground to evoke the spirituality, sights, colors, and sense of wonder you find in the jungles of Latin America. We drew inspiration from the drinks and ingredients spanning countries such as Colombia, Peru, and Mexico," says Wiseman. "At MaryGold's, it was really all about highlighting the culinary team and what they're using that's fresh and local."

The brainstorming process included everything from glassware and themes to seasonal ingredients, garnishes, and the menu it's meant to be paired with.

At MaryGold's, the theme was to bring Florida front and center while highlighting Kilgore's use of intriguing ingredients from tropical flavors like soursop, yuzu, and kumquat to a marriage of condensed milk and key lime-infused agave or tomato and strawberry in a housemade soda.

The Kumquat & Coconut at MaryGold's Florida Brasserie.
Bar Lab photo
While there's typically always some form of variation on a margarita, an old fashioned, and a martini — with the most popular spirits represented — it's often the unique and subtle touches like presentation and new flavor pairings that make the most impact, Wiseman explains.

Each is meant to complement the cocktails with a rotating selection of raw bar and small plates, from a local crudo made with the day's fresh catch to beef tartare dressed with umami oil and ancho chili.

The resulting cocktail menu is imbued with various colors, each meticulously crafted and rife with herbal elixirs, exotic infusions, and fresh-pressed juices. Here, guests can enjoy signature libations like "Sunset on la Playa," a blend of Illegal mezcal, Strega and Giffard Banane liqueurs swizzled with orange juice, lime, a coriander-turmeric elixir, and a dash of aji amarillo and garnished with a plantain chip, or the "Inca Orchid" — a palate-pleasing blend of Patron blanco, pisco, and fresh lemon and lime shaken with housemade Peruvian chicha morada (a drink made from Peruvian purple corn flavored with fruits and spices).

But the true star of the Higher Ground menu might be the "Theobroma Cacao." The drink is a nod to the name "Theobroma," a word chosen by Carolus Linnaeus, considered the father of modern-day taxonomic plant classification, for the cacao tree. It derives from ancient Greek, translating to "food of the gods."

Wiseman crafted a rose-hued, clarified milk punch to create her liquid interpretation. This five-day process begins with steeping tea and macerating fruits to infuse flavor and deepen the color.

The heady combination of Aberfeldy scotch whisky, fino sherry, strawberry, and raspberry is married with gentle notes of steeped rose tea, sage, and cacao and a touch of citrus to pull the tannins and clarify the liquid. It's poured into a goblet-sized glass with a single cube, served on a wooden board with dried rose petals and smudged, smoking sage.

"The drink is meant to evoke the ritual of a cacao ceremony similar to those you'll find in Mexico, complete with a personal white sage smudge to promote spirituality, healing, and wisdom," shares Wiseman.

Likewise, the signature cocktails at MaryGold's live up to the reputation with selections such as the "Caper Berry," Wiseman's twist on martini service featuring a choice of vodka or gin, and Martini ambrato matched with a housemade umami brine and a selection of accouterments.

MaryGold's Florida Brasserie and Higher Ground at Arlo Wynwood. 2217 NW Miami Ct., Miami; 786-522-6600; arlohotels.com/wynwood/eat-and-drink.
KEEP MIAMI NEW TIMES FREE... Since we started Miami New Times, it has been defined as the free, independent voice of Miami, and we'd like to keep it that way. With local media under siege, it's more important than ever for us to rally support behind funding our local journalism. You can help by participating in our "I Support" program, allowing us to keep offering readers access to our incisive coverage of local news, food and culture with no paywalls.
Make a one-time donation today for as little as $1.