How Likely Are These Ten Heat Players to Remain in Miami Next Season? 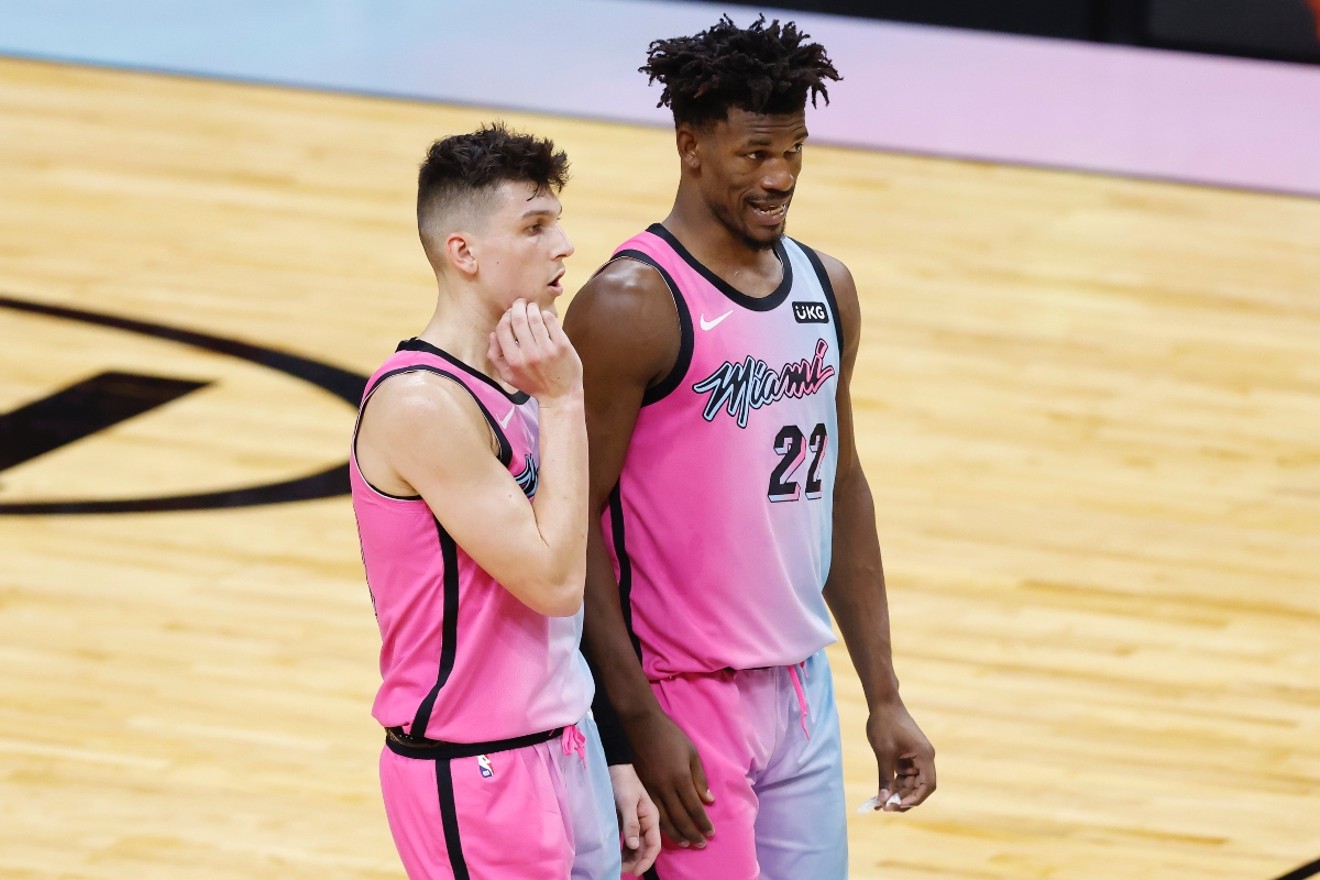 Will Tyler Herro be back in Miami? Photo by Michael Reaves/Getty
With the NBA Finals in our rearview mirror, it's officially time to tie a nice little bow on the Miami Heat's 2020-21 season. From 'Bully Bullies' that came within two wins of a title in the 2020 NBA Finals to a clean sweep first-round exit by the Milwaukee Bucks in these most recent playoffs, the past ten months have been one hell of a roller-coaster ride for the Miami Heat.

This offseason could feature ups and downs similar to those of the past year, as the Heat have a few roster decisions to make. Let's take a look at some of the biggest contributors from last season and throw out a percentage chance that they'll return to the team next season.

Why? Because it's the NBA offseason! All we have left to talk about are hypotheticals and transactions.

Precious Achiuwa: 50 percent. Outside of the possibility that he's included in a trade package for a star like Damian Lillard, this is a player Heat fans should get used to seeing on the court. He's young, under contract, and, apparently, already beefed up this offseason in anticipation of playing more down low in the post.

Achiuwa had an underwhelming rookie season. But if his play for Nigeria in the games preceding the Tokyo Olympics is any indication, he's already a different player.

Bam Adebayo: 100 freaking percent. Fresh off a max-contract extension and the Tokyo Olympics, Bam Adebayo is a weight-bearing cornerstone for the Miami Heat's future. He's not going anywhere. Some have speculated he could be included in a package that lands Damian Lillard, but that seems highly unlikely.

Bam is the man in Miami. This is his team. Everything else that happens this offseason and for many moving forward should center on his talents.
Trevor Ariza: 5 percent. After a hot start in Miami, Trevor Ariza's half-season tenure with the Heat ended with a thud. It's unlikely the man who was deemed a replacement for Jae Crowder returns to Miami, unless he's willing to take on a lesser role and likely something close to the veteran minimum in pay.

Miami can (and should) do better than Trevor Ariza this offseason. Bam Adebayo deserves more help from that position.
Nemanja Bjelica: 15 percent. Any NBA player who wore No. 70 last season will likely not last long for that team. It's the equivalent of an obscure MLB reliever getting called up late in the season and getting handed No. 84.

Bjelica is a big man who can shoot three-pointers. The problem is that he isn't much else. Outside of a few spot situations that may arise every year, he's a waste of a roster spot. The Heat aren't likely to bring back such a one-dimensional player.
Jimmy Butler: 100 percent. Jimmy Butler is going to be with the Miami Heat next season. And the one after. And likely a few after that. The Heat is looking to build around Butler in what is likely a three-to-four-year window in which he has to compete for a championship title. He's staying.

While there is a decision coming up in regard to an extension for Butler, that's unlikely to be anything but a formality. The Heat signed Butler two seasons ago to be a franchise star. He has delivered.
Tyler Herro: 40 percent. Something just doesn't smell right here, so we're pinning the chances Herro is in Miami come September at less than a coin flip. Herro has a lot going on off the court. That's his right. But it seems the Miami Heat aren't all that keen on him being a pitchman for burrito bowls and cereals while not putting in as much work on his game as they'd like.

The bigger reason Herro is a good candidate to be gone before next season is the fact that he's Miami's best trade chip. If Herro makes it to the upcoming season with Miami, the trade rumors will continue through the trade deadline, where a guy like Bradley Beal may become available.
Duncan Robinson: 70 percent. Call me crazy, but I believe Duncan Robinson is staying put in Miami. Why? Similar to the reason Hassan Whiteside was re-signed for huge money: Because, in theory, you'd rather have Duncan Robinson as the trade chip than no Duncan Robinson at all.

Pat Riley wants to go after a third star. His chances to land the next available greatly increase if he has a Robinson to send away (and to help match in the deal in terms of salaries).
Goran Dragic: 51 percent. The Heat isn't going to pick up Goran Dragic's $19 million option, but it's still possible he could stay in Miami. What's also possible is a team — like the Dallas Mavericks, who have fellow Slovanian Luka Doncic — is willing to pay more for his backup point-guard services.

It seems more likely Dragic stays in Miami. But since it's his last chance at a big payday, we wouldn't blame him if he signed with Sacramento (or anyone willing to cut a big check).
Udonis Haslem: 99 percent. If UD were retiring, wouldn't it have happened already? I mean, the Heat have released their preseason schedule and, still, no UD announcement. The guy is coming back for one more season.

With fans back in the arena next season, it seems like a perfect opportunity for UD to let everyone say goodbye in person. Haslem seeing his career end in the COVID bubble, or mostly empty venues last season, wouldn't have felt right.
Kendrick Nunn: 10 percent. Sometimes you have to let the little birdies fly. Kendrick Nunn is a baby bird the Miami Heat took in, nurtured, and now needs to let loose in the wild so he can thrive. There seems to be a next-to-zero chance the Heat is the team willing to pay Nunn the most for his services.

Nunn is a competent scorer with lots of ability. He just doesn't fit into the current salary-cap limitations Miami is working under. If he's willing to take a hometown discount, one could see Nunn back in Miami on a one-year $10 million deal. That seems farfetched, though.
KEEP MIAMI NEW TIMES FREE... Since we started Miami New Times, it has been defined as the free, independent voice of Miami, and we'd like to keep it that way. With local media under siege, it's more important than ever for us to rally support behind funding our local journalism. You can help by participating in our "I Support" program, allowing us to keep offering readers access to our incisive coverage of local news, food and culture with no paywalls.
Make a one-time donation today for as little as $1.