The long-vacant South Shore Hospital was demolished Tuesday morning. screenshot via Miami Beach Police Department
For more than a decade, one of the first things drivers would see as they pulled onto Miami Beach from the MacArthur Causeway was an abandoned concrete building stripped of windows and doors.

Considered an eyesore by many, the old South Shore Hospital came tumbling down this morning during a scheduled implosion. Neighbors cheered when the building finally collapsed:

This morning, the old South Shore Hospital, between Alton Rd. and West Ave. in Miami Beach was demolished to make way for a new park and high-rise condo. It had been abandoned since 2006. (video via @AliciaZuckerman) pic.twitter.com/L3ur4jrP6a

South Shore Hospital opened in the late '60s but floundered through various financial troubles over the decades as South Beach's geriatric population withered. The facility shuttered in 2006 after going bankrupt, according to the Miami Herald.

The hospital site at 630 Alton Rd. will be redeveloped into a 44-story skyscraper, a three-acre public park, and — of course — more retail space.

Although Miami Beach does not typically allow buildings to be imploded, developer Russell Galbut appealed that policy through the city's Board of Rules and Appeals.

Before Tuesday morning's demolition, crews helped seal off the entryways of nearby apartment buildings and businesses. Customers at the Publix on the corner of Fifth Street and Alton Road were diverted through an east door, which was farthest from the implosion site.

Here's a slow-motion video of the implosion from Miami Beach Commissioner Mark Samuelian:

As a refresher, here's what the hospital looked like in 2003: 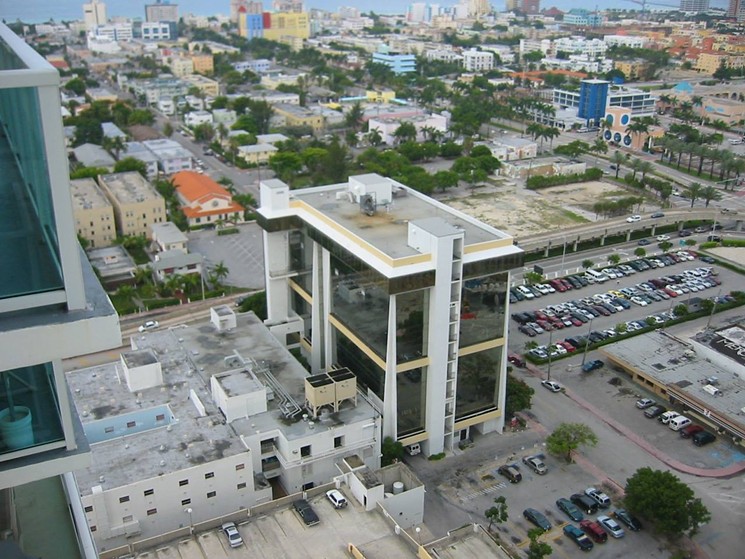 South Shore Hospital on May 24, 2003
photo courtesy of Mitch Novick
Although the abandoned hospital took less than a minute to come crumbling down, the new development won't be finished for quite some time. Galbut says it could take two to three years to complete.
KEEP MIAMI NEW TIMES FREE... Since we started Miami New Times, it has been defined as the free, independent voice of Miami, and we'd like to keep it that way. With local media under siege, it's more important than ever for us to rally support behind funding our local journalism. You can help by participating in our "I Support" program, allowing us to keep offering readers access to our incisive coverage of local news, food and culture with no paywalls.
Make a one-time donation today for as little as $1.