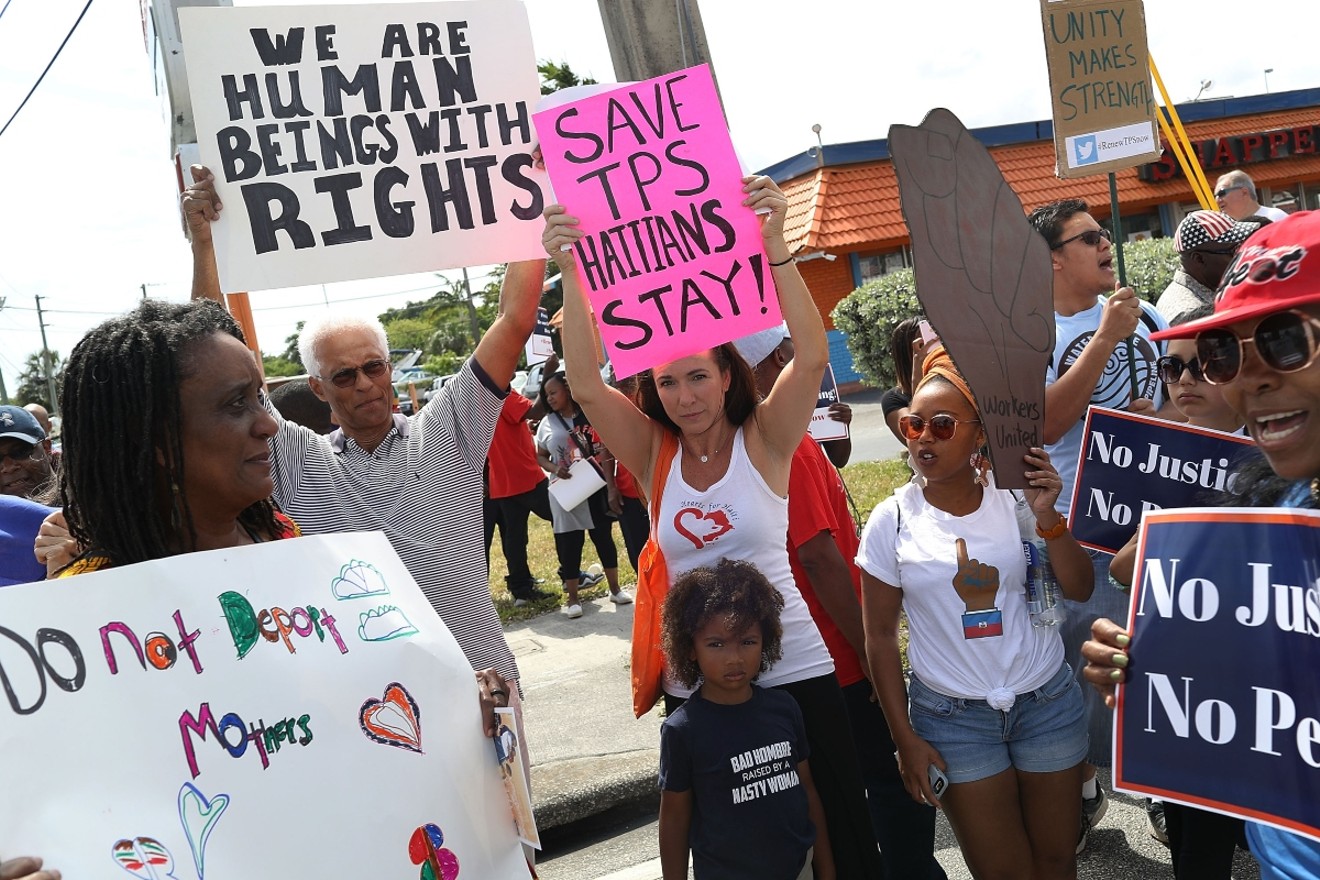 A protest for TPS for Haitians in front of the U.S. Citizenship and Immigration Services office in 2017 in Miami. Photo by Joe Raedle/Getty
Hundreds of thousands of immigrants from Haiti, El Salvador, Honduras, Nicaragua, Venezuela, and other countries live and work in the United States under the designation of Temporary Protected Status (TPS) because conditions of war or disaster in their home nations make it dangerous for them to return.

But yesterday, the U.S. Supreme Court dealt a blow to many of the people who have temporary status and live in a sort of immigration limbo. In a unanimous decision, the court ruled that those living in the United States for humanitarian reasons cannot become permanent residents if they entered the country illegally.

"This is definitely a big step backwards," says Marleine Bastien, executive director of the Family Action Network Movement, a Little Haiti-based organization that campaigns nationally for TPS. "This ruling will have a devastating impact on thousands of TPS recipients, especially Haitians."

The Supreme Court considered the case of Jose Santos Sanchez, who came to the U.S. from El Salvador in 1997, was granted temporary protected status in 2001, and sought to become a permanent resident.

According to the ruling, U.S. Citizenship and Immigration Services denied Sanchez's green card application, arguing that Sanchez was ineligible for "lawful permanent resident" status because he hadn't been lawfully admitted to the U.S.

"The question here is whether the conferral of TPS enables him to obtain [lawful permanent resident] status despite his unlawful entry," Justice Elena Kagan wrote for the court. "We hold that it does not."

Kagan wrote that, under federal law, immigrants under temporary protected status who arrived in the U.S. illegally can't adjust their status to permanent resident because they had not been "lawfully admitted" to the United States.

American Friends Service Committee Florida, an immigration advocacy organization working in Homestead, denounced the ruling. Mariana Martinez, the group's policy and advocacy coordinator, says that even before the ruling, immigrants with temporary protected status had limited options when it came to adjusting their immigration status. The ruling only adds another roadblock, Martinez says.

"Every year, there's always a threat to TPS," Martinez says. "And there's never a promise of how you can get a green card."

Martinez says immigration lawyers and groups like hers are reviewing the decision to figure out how it might affect certain communities. According to the Associated Press, the decision doesn't affect immigrants under TPS who came to the U.S. legally and overstayed their visa.

Immigration advocates have long championed a pathway to citizenship for all immigrants.

"There needs to be a way for people to emigrate here in a compassionate and humane way," says Miami immigrant-rights activist Thomas Kennedy.

Martinez and Bastien say this is the time for Congress to pass immigration reform measures. The U.S. House of Representatives has passed the American Dream and Promise Act, which would provide a path to citizenship for TPS holders, but the legislation has not passed the Senate.

"Now, the ball is in Congress' court to act swiftly and pass comprehensive immigration reform," Bastien says.
KEEP MIAMI NEW TIMES FREE... Since we started Miami New Times, it has been defined as the free, independent voice of Miami, and we'd like to keep it that way. With local media under siege, it's more important than ever for us to rally support behind funding our local journalism. You can help by participating in our "I Support" program, allowing us to keep offering readers access to our incisive coverage of local news, food and culture with no paywalls.
Make a one-time donation today for as little as $1.