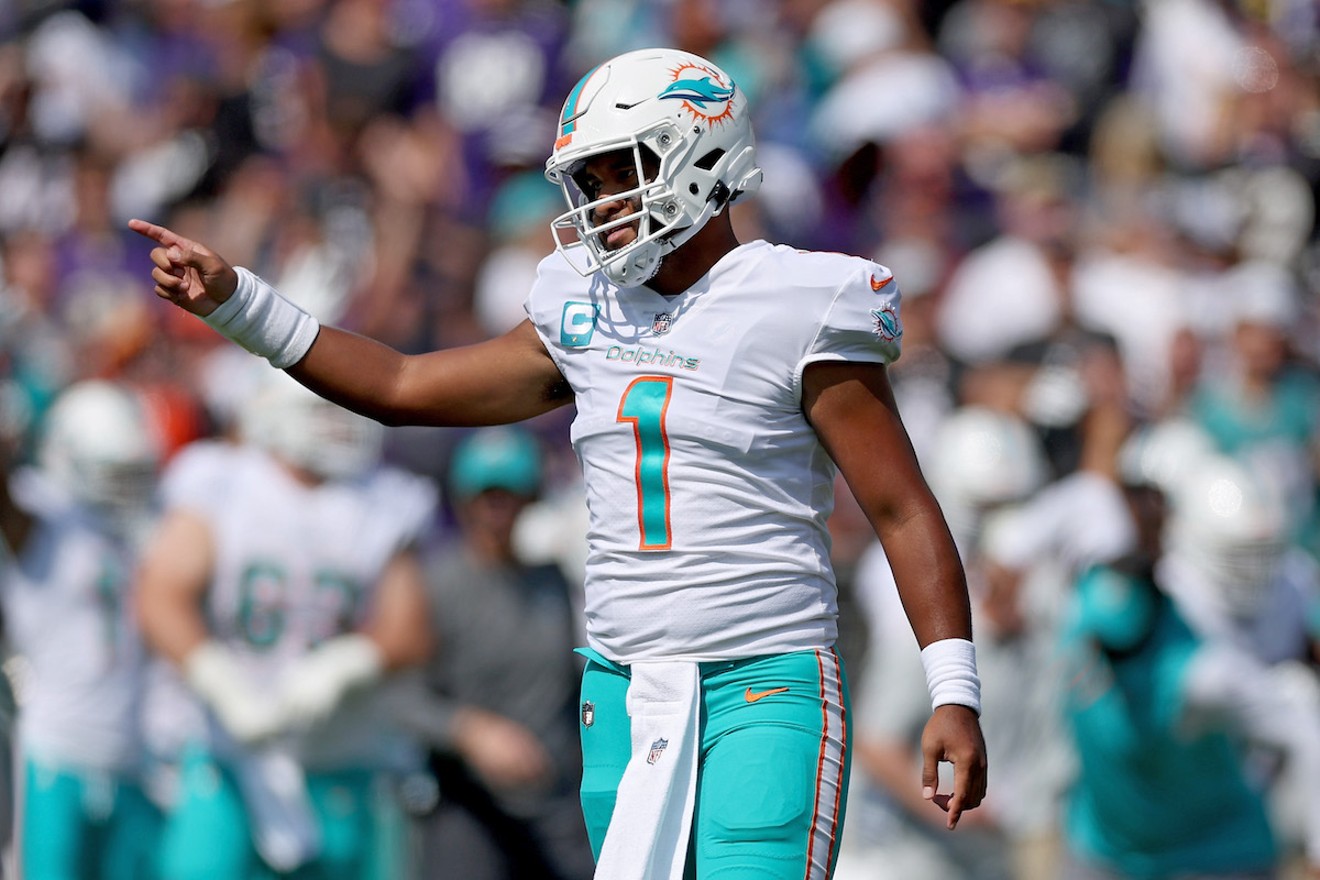 Tua Tagovailoa threw for 469 yards and six touchdowns in the Dolphins' 42-38 comeback win in Baltimore on September 18, 2022. Photo by Patrick Smith/Getty Images
On Sunday, Tua Tagovailoa proved to the entire world that he is, in fact, him. And as a result, the Miami Dolphins are a 2-0 football team.

It also resulted in a lot of people owing Tagovailoa an apology. Lucky enough for Tua, Twitter specializes in keeping receipts.

After tossing two interceptions in the first half, the much-scrutinized Dolphins quarterback set career highs with 469 passing yards and six touchdowns in the Dolphins' 42-38 memorable comeback win Sunday over the Baltimore Ravens. But just how those stellar stats came to fruition will be what shocks Miami Dolphins archaeologists for eons to come.

Down 28-7 late in the third quarter and 35-14 early in the fourth, Tagovailoa led the Dolphins to victory by throwing for 319 yards and five touchdowns in the second half alone. His final stat tally tied names such as Bob Griese and Dan Marino on all-time single-game lists.

If you missed one of the greatest Dolphins performances ever, video evidence that children in Miami will likely watch in history class for centuries to come is embedded below.


Here’s ALL SIX of Tua Tagovailoa’s Touchdowns from today! What a performance! #FinsUp pic.twitter.com/32IWZmeN6o

Yikes. Tough week for Tua's detractors. If he continues to play this way, the line to apologize to the Dolphins quarterback — currently leading the NFL in both passing yards and touchdown passes — will look like what we saw in the UK last week for the queen.

Naturally, the internet never forgets, and Twitter in particular made sure Tua's naysayers heard about his play. Dolphins fans on the bird app had a field day laughing it up, with a special assist from the QB's favorite new weapon, Mr. Tyreek Hill himself.

Tua to all his critics after throwing 6 TDs: pic.twitter.com/8OHUjngs63

me holding the receipt of all your tua slander pic.twitter.com/PhNkk6AFkZ

Must've been a tough watch for the showpony today pic.twitter.com/eG7kGO7iYj

The win means the Dolphins' Week 3 matchup against the Buffalo Bills this Sunday at Hard Rock Stadium will be one of the marquee games of the week and a battle for an early stranglehold on first place in the AFC East — especially if the Bills slip up and lose to the Tennessee Titans on Monday night.

Soak it in, Tua detractors. It might be a long season.
KEEP MIAMI NEW TIMES FREE... Since we started Miami New Times, it has been defined as the free, independent voice of Miami, and we'd like to keep it that way. With local media under siege, it's more important than ever for us to rally support behind funding our local journalism. You can help by participating in our "I Support" program, allowing us to keep offering readers access to our incisive coverage of local news, food and culture with no paywalls.
Make a one-time donation today for as little as $1.