Ten Reasons the Miami Dolphins Will Make the Playoffs This Season 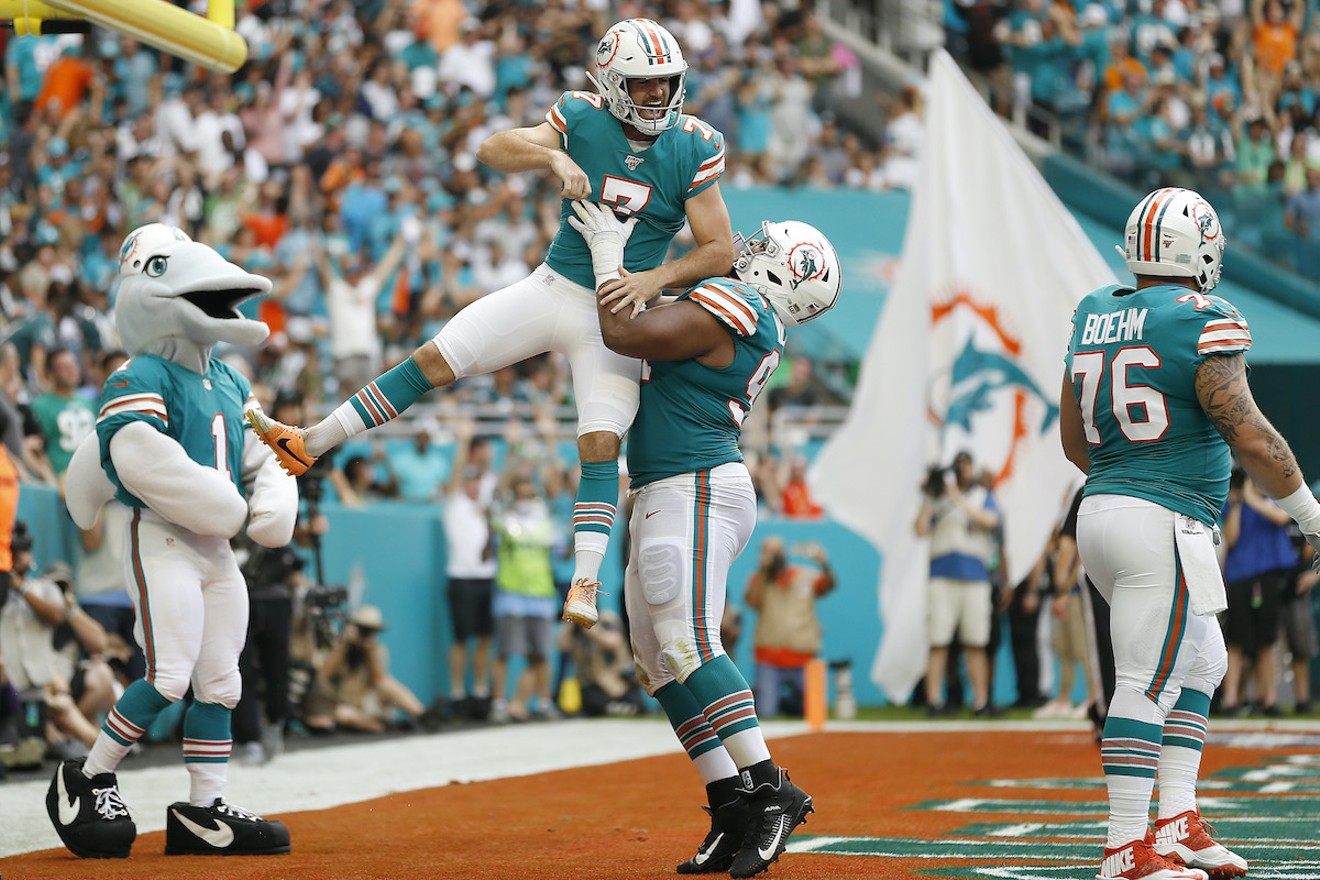 Could this season be one that sees the Dolphins back in the Super Bowl? Photo by Michael Reaves/Getty Images
Optimism surrounding the Miami Dolphins this time of year is already unseasonably high. Even for a franchise that hasn't won anything since the early 1970s.

Dolphins fans have sort of perfected the art of lying to themselves about why the upcoming season could be the year that sees the Dolphins back in the Super Bowl. They've had plenty of practice, after all.

But with training camp underway in a brand-new facility and fans being welcomed back to the stadium after a year of COVID restrictions, hope is as high as it's been in some time.

This time, it feels warranted. This really could be the season that turns the tide. Or at least that's what Dolphins fans are telling themselves.

Here are ten reasons Dolphins fans should rightfully feel this is their year.


"My favorite draft in the league. Jaylen Waddle never had a 1,000-yard receiving season at Alabama, but he projects to a strong receiver/returner. Jaelan Phillips is the mystery pass-rusher of this draft."

Miami Added a Lot of Talent in the NFL Draft

Miami was a pretty talented team last season, and then they added to that talent in the draft. Being able to add three Day 1 starting players in Alabama speedster Jaylen Waddle, former Miami Hurricane Jaelan Phillips, and Notre Dame tackle Liam Eichenberg is a huge score for a team that had holes at all three spots last season.

Through the draft, Miami turned three of its biggest weaknesses into three strengths heading into this season. That can only translate to more success on the field.

Tua Tagovailoa Had a Normal Offseason

The biggest difference between the 2020 and 2021 Miami Dolphins is that franchise quarterback Tua Tagovailoa is coming into the season healthy, following an offseason that allowed him to train, not recover from surgery as he did in 2020. Concentrating on football, not physical therapy and Zoom meetings in the middle of a pandemic, should do wonders for Tua's play on the field.

Last offseason, Tua was not only hampered by COVID-19 protocols but rehabilitation of his hip following a horrendous injury he suffered at Alabama. This year, he enters the season looking bigger and better than ever.

Last season, there were times when Tua Tagovailoa was throwing to wide receivers few people had ever heard of. This season, Miami comes into the year adding a Pro Bowl-caliber wideout in Will Fuller to an already otherwise stacked group of offensive playmakers. Fuller is capable of double-digit touchdown seasons when healthy. The only question is whether that's possible in light of his history of injuries; he's already missed practices this year.

Ryan Fitzpatrick won games in Miami. More games than anyone imagined he would when the team signed him during a total roster rebuild. The winning almost cost Miami a chance to draft Tua, and last season, his presence in the locker room did more harm than good for Miami's future signal-caller.

Now that Fitzpatrick has moved on, Tua can rest easy that he won't have to worry about being replaced every time he encounters a few bad quarters of play. The Dolphins are his team now that Fitzpatrick is in Washington giving false hope to another team.

Brian Flores Is the Man

In his first year in Miami, Dolphins head coach Brian Flores was just trying to stay above water. The team was set up to fail in an attempt to draft a quarterback that offseason. In his second season, Flores proved that when given a fighting chance to win with a decent roster, he's the coach Miami wants moving forward.

Knowing Flores has a firm handle on the coaching job in Miami is a big plus. He's cemented himself as the man to lead Miami for the next few years at the very least.


Gotta say, this new facility the Dolphins have build it BEAUTIFUL! It opens to fans on the 31st and I would recommend checking it out if you can get a ticket. @NBC2 pic.twitter.com/zbvkCipGpJ

It may seem like nothing, but the Dolphins' move to a new state-of-the-art training facility can only improve their chances of success this fall. The improvement of the players' surroundings and comforts is an investment in them, one that Miami hopes will pay off for years to come. As the saying goes: Look good, feel good. Feel good, play well. The Dolphins' new training home looks good and feels good, so one can only expect that translates to playing well enough to make the playoffs.

Albert Wilson Is Back

As previously mentioned, the Dolphins wide receivers unit is vastly improved in 2021. From DeVante Parker to Jaylen Waddle to Will Fuller, Miami has both speed and size at its disposal.

They'll also have Albert Wilson, a guy who's slid under the radar after taking a season off during COVID. He's back, looking to play well for a new contract, and right now he's winning training camp.

Miami may have too many wide receivers come the regular season. If that's the case, a trade could make them better in other departments.

The AFC East Isn't What It Used to Be

The Buffalo Bills are a bonafide Super Bowl contender. The rest of the AFC East? Not so much. The New England Patriots have long ruled the division, but they're a franchise on the decline. And the Jets are still, well, the Jets.

There is no reason the Miami Dolphins shouldn't finish at least second in the AFC East in 2021. If they don't, that means something went terribly wrong. Rebuilding is over. This is a roster constructed for the playoffs, unlike the Jets and Patriots.


Just looking at some regular-season NFL schedules, and man, even though the Dolphins have the 5th easiest strength of schedule — they open with a deceptively tough stretch.

Patriots, Bills, Raiders, Colts, Bucs — and three of those games are on the road. Hot start will be huge. pic.twitter.com/2tBWYOzz49

While looking at strength of schedule in August isn't always the best barometer for what is to come once the actual games are played, it seems the Dolphins have a manageable path ahead of them in 2021. On paper, Miami has the fifth-easiest schedule in all of the NFL entering the year, and they can really set themselves up for success with a good start against the tougher teams. If Miami can play well to start the season, the second half could be a breeze. That will help when it comes to their pursuit of a playoff spot.
KEEP MIAMI NEW TIMES FREE... Since we started Miami New Times, it has been defined as the free, independent voice of Miami, and we'd like to keep it that way. With local media under siege, it's more important than ever for us to rally support behind funding our local journalism. You can help by participating in our "I Support" program, allowing us to keep offering readers access to our incisive coverage of local news, food and culture with no paywalls.
Make a one-time donation today for as little as $1.