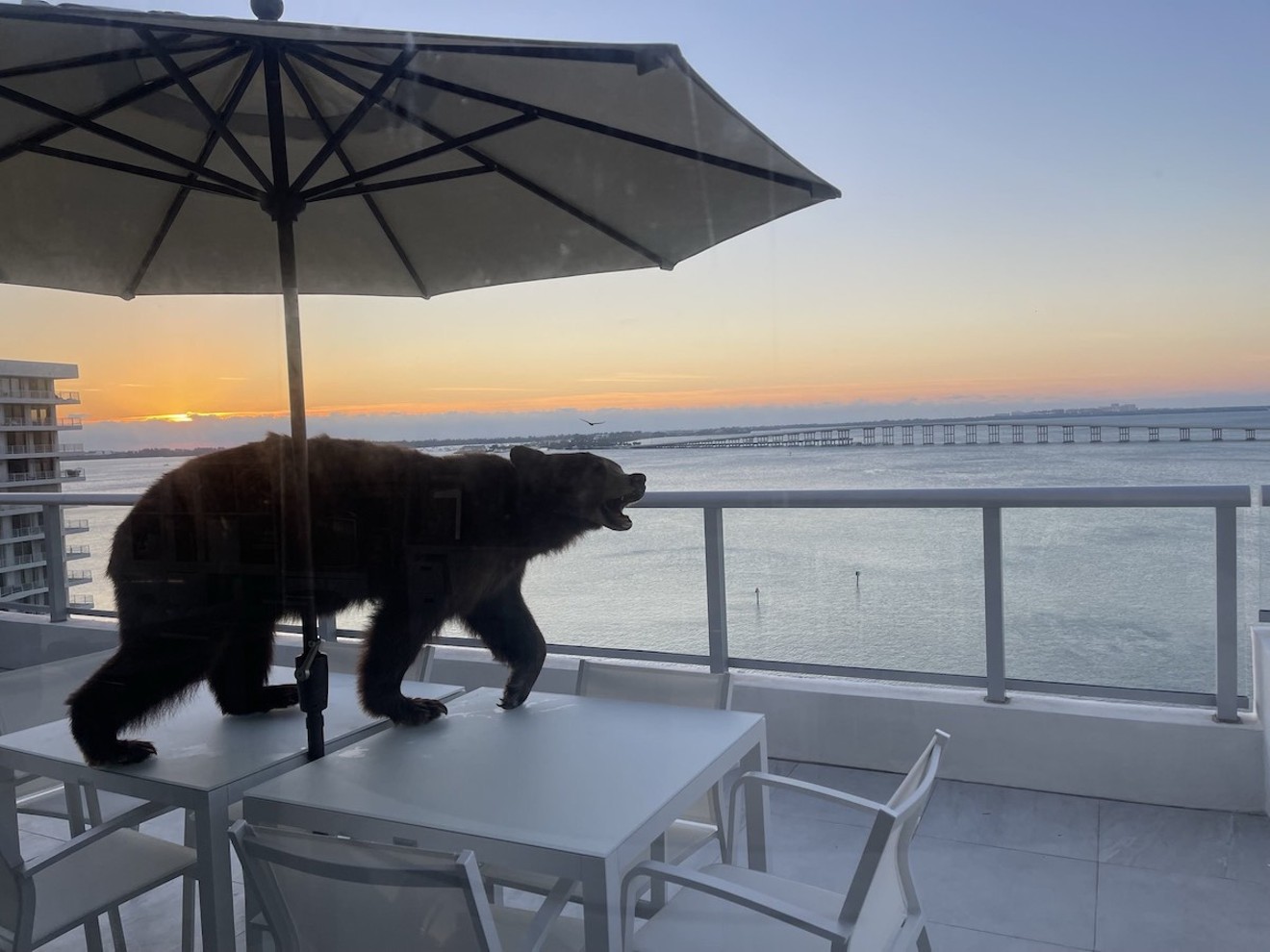 Alex Roy put a taxidermied American black bear on top of his patio furniture in mid-February. Photo courtesy of Alex Roy
Never mind lions and tigers. It's a bear on a 14th-floor balcony that has residents of the Palace condominium in Brickell going "Oh my!"

The bear, of course, is no longer alive and, according to its owner, Alex Roy, hasn't been for more than 30 years. But that's not immediately apparent to the number of concerned residents at the Palace and neighboring towers who have called the building's management ever since Roy placed the five-foot-long taxidermied creature on top of his patio furniture in mid-February.

"I get a phone call from the building manager, who is lovely, and she goes, 'Mr. Roy, I believe we have had multiple conversations about our pet policy.... What is the situation with the bear that appears to be on your patio?'" Roy tells New Times.

"I told her, 'Have the police come, please open my door, it's perfectly safe, I promise it's fine,'" he recounts, assuring her that a carnivorous mammal wouldn't come lunging toward her if she came knocking.

Though the building manager still seemed apprehensive, Roys says there were "howls of laughter" over the phone after he sent her a photo of the bear's frozen expression and stance.

"Not everyone appreciates it," Roy says with a shrug, "but I have a 3-year-old who thinks it's great."

The Arquitectonica-designed Palace, with its geometric, red tiers, is immediately recognizable on the city skyline. Though the building, which went up just south of SE 15th Road in 1981, has 42 floors, Roy — who is a rally race driver, podcaster, and director of special operations at the self-driving car technology company Argo AI — scored a unit in one of the famed "red steps" when he moved to Miami last October.

Roy admits he didn't read all the paperwork and was peeved to learn that the building forbids all pets except for service animals.

"I don't have a dog but, like Larry David, I'd like to have the choice," he says. "I saw other people with dogs, and I thought it was an injustice since they can't all be service animals."

That's when Roy decided it was time to take his taxidermy bear out of storage and positioned it on the patio table "for maximum visibility."

He wasn't concerned with a clash in interior décor — he already fills his home with all sorts of eccentric curios, including "three entire [taxidermy] animals and at least a dozen heads and skulls."

But out on the balcony, with its sweeping views of Biscayne Bay, things can get windy. Roy leaves the 30-pound bear outside, rain or shine.

"Sometimes I'd come home and he'd be on the other side of the patio," Roy admits. "Some days the wind completely rotated him around."

That's why Roy can understand that in certain weather conditions, and from certain vantage points, it might appear as though the bear has come back to life.

"I would chain him down," he says, "but that would probably scare everyone even more."