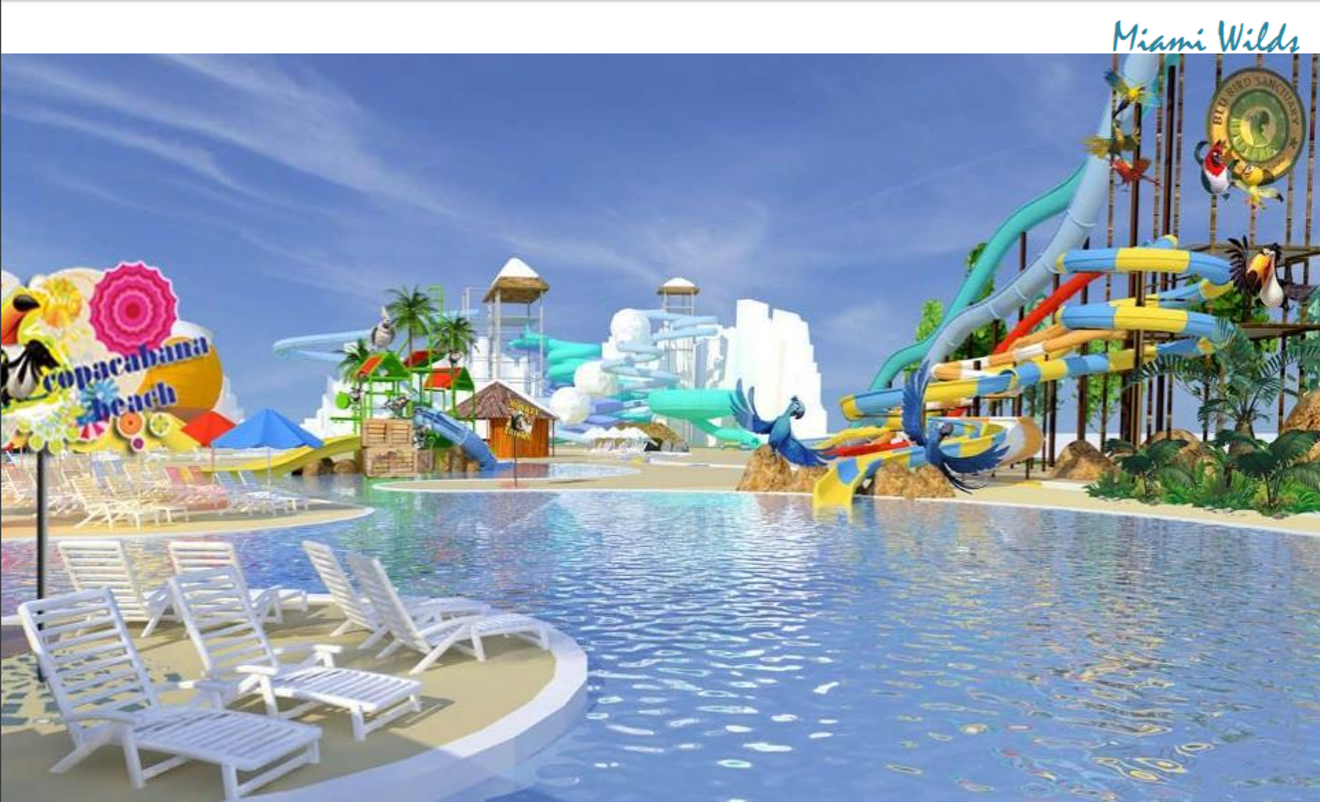 An early rendering of the proposed Miami Wilds Park Image by Miami Wilds Park
Next week is the last chance for the current iteration of the Miami-Dade County Commission to vote on the controversial Miami Wilds water park — but the development is receiving more and more opposition from conservationists and politicians.

The nonprofit Bat Conservation International recently released the results of a 2019 ecological survey that found the Zoo Miami parking lot, the proposed area for the new water park, is an essential feeding area for the critically endangered Florida bonneted bat.

Out of ten sites around Miami-Dade County surveyed by researchers between May and December of last year, the parking area of Zoo Miami saw the highest presence of the bonneted bat, one of the nation's most endangered species. Researchers detected the bonneted bat on 103 of 105 nights spent in the parking area, and they recorded an average of 6,057 calls a night from that species.

"The recordings... show that the Florida bonneted bat use this space extensively for foraging and social interactions based on a large number of social calls recorded," the survey states.

A press release containing the survey results says construction on the Miami Wilds project would threaten the bonneted bat with extinction.

The water park project dates back to 2006, when county residents voted in favor of a referendum about creating a theme park in South Dade. The referendum called for the creation of an entertainment area around Zoo Miami to create jobs and economic opportunities, as long as development was not done on "environmentally sensitive" land.

But over the past 14 years, the theme park has been plagued with roadblocks. Endangered species, including the Miami tiger beetle and the bonneted bat, were found in the project area, stalling the project for over a decade. Plans for what was once supposed to be a large theme park with rollercoasters and attractions meant to rival Universal Studios were scaled back to propose a much smaller water park, and the site was moved to Zoo Miami's parking lot to mitigate any risk of harming endangered species.

Miami Wilds would bring in a projected $120 million in rent for the county. And term-limited county commissioner Dennis Moss, who has been pushing for a vote to approve the project without public discussion since June, says the park will bring jobs and opportunities for the people he represents in South Dade.

According to Moss, commissioners are due to vote on the approval of the project on October 20, though the official agenda has not been posted and the vote has previously been postponed from earlier meetings.

October 20 would be Moss' last opportunity to push for Miami Wilds, because his term is up this year. After October 20, there will be no more meetings before a new commission is voted in on November 3.

Moss says he doesn't know what will happen with the project if it doesn't get passed before he leaves, or if it will be inherited by the new commission.

The Florida bonneted bat is one of the country's most endangered species of bat, and it lives around Zoo Miami.
Photo courtesy of Bat Conservation International
In addition to the Bat Conservation International survey, the county also conducted its own ecological survey in collaboration with the U.S. Fish and Wildlife Service (FWS) to determine the potential presence of endangered species in the project area. New Times received a summary report of that survey last week in response to a public records request.

The county survey found that there were no adult Miami tiger beetles found on the project area during the survey period between August 15 and September 15. The county also found no endangered plants, and there were no trees with "roosting potential" for the bonneted bat in the parking lot, according to the report. The report specifically points out that the project area was reduced by 80 percent from its original proposed size, and that while there are bat houses that contain bonneted bats within Zoo Miami, none of them are in the parking lot.

But unlike the Bat Conservation International, county surveyors did not perform an acoustic study, which uses sound-detection technology to detect the high-pitched calls that bats use for echolocation as they fly over areas where they hunt for food.

Miami Wilds has also come under scrutiny from the local Tropical Audubon Society. The conservationist group has called for residents to contact their commissioners in opposition to the project because it violates the 2006 referendum that specifically prohibited development on environmentally sensitive land.

The Audubon Society's statement echoes Bat Conservation International's point that the parking lot is a critical foraging area for the bonneted bat. It also asserts that building a water park in the area will fragment the habitat of the endangered Bartram's scrub-hairstreak butterfly.

Elvis Maldonado, one of the candidates running for Moss' seat, told local environmentalist Al Sunshine that although the Miami Wilds project would bring much-needed jobs to the district, he is against developing it at the Zoo Miami site because of environmental and traffic concerns.

"I strongly oppose the project’s development in its current location, which, if allowed to proceed, would significantly diminish and threaten the area’s delicate ecosystems, that are home to many endangered and federally-protected species," Maldonado said in the statement. "Moreover, to build this project along 152nd Street is a terrible idea as this already heavily congested roadway has no infrastructure to handle the additional traffic." (Maldonado confirmed to New Times that the statement posted by Sunshine on Facebook accurately reflects his opinion.)

New Times reached out with questions about Miami Wilds to Maldonado's opponent, Kionne McGhee, but did not receive a response.
KEEP MIAMI NEW TIMES FREE... Since we started Miami New Times, it has been defined as the free, independent voice of Miami, and we'd like to keep it that way. With local media under siege, it's more important than ever for us to rally support behind funding our local journalism. You can help by participating in our "I Support" program, allowing us to keep offering readers access to our incisive coverage of local news, food and culture with no paywalls.
Make a one-time donation today for as little as $1.