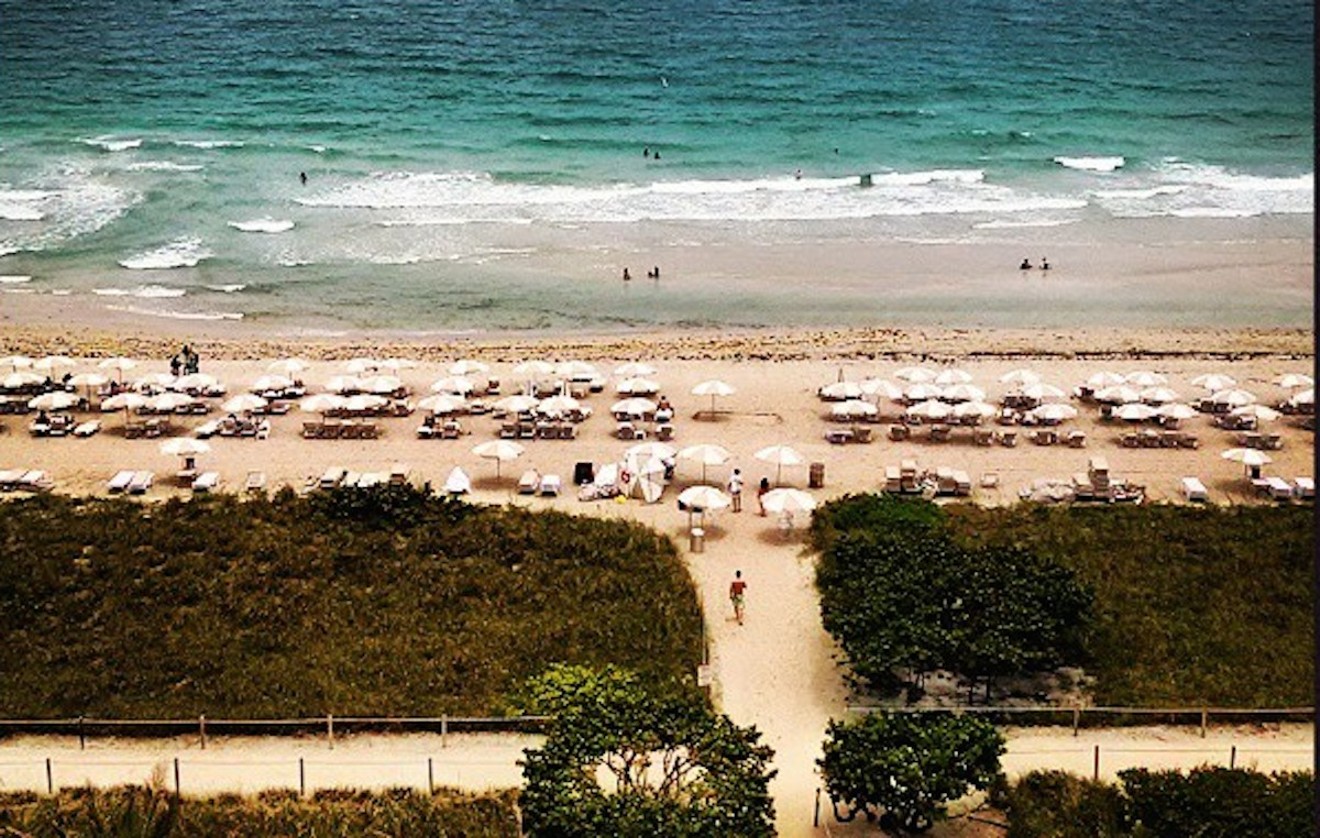 A resident says umbrella vendors in Surfside are terrorizing residents. Photo by Enrique Dans via Flickr CC
Gilberto Garcia bought his Surfside condo for a pretty obvious reason. Whenever the New Jersey attorney jets south to visit his son, a University of Miami student, and stays in the Carlisle on the Ocean tower, he naturally wants to hang out on the white-sand beach right in front of his building.

Unfortunately, Garcia says, a gang of umbrella goons is straight-up wrecking his beachfront spot. Surfside has given the Marriott across Collins Avenue a huge swath of sand right in front of his building to rent dozens of private umbrellas and chairs — and according to Garcia, the hotel is not only taking up most of the public beach but also chasing away anyone who tries to set up their own gear.

Now he's suing the city and alleging the contract is illegal. The lawsuit casts a rare light on the contentious, big-money world of contractors who often grab the exclusive rights to rent gear on public beaches by cozying up to local politicos.

"This is really a big problem," says Garcia, who once worked as a city attorney in West New York. "I needed to take action because these are public beaches."

Garcia has owned his condo at the Carlisle — located on Collins Avenue at 91st Street — since 2003, when he bought it for $227,000. The small building sits right on the oceanfront, but last year, Garcia says, the Marriott began renting out dozens of umbrellas and chairs there.

All of that equipment blocks residents and non-hotel visitors from using the public beach, he says.

"The beach operators request that beachgoers who are sunbathing and enjoying the beach to move," Garcia's attorney writes in the lawsuit. "The residents of the area, including [Garcia], are unable to choose a desired place at the public beach because the beach operators have taken control of the beach."

Even worse, hotel employees have routinely booted sunbathers from the area unless they pay up, he says. "The Marriott beach operators intimidate beachgoers and make it difficult to access the beach in a manner that permits beachgoers to enjoy the public beach," his suit argues.

In fact, the whole arrangement is not only unethical but also illegal, Garcia claims. In December 2016, Surfside passed an ordinance banning any business west of Collins Avenue from applying for a license to operate on the beach, and the Marriott stands on the west side of Collins.

Yet the hotel has continued renting out chairs and umbrellas anyway, he says. "The Town of Surfside has permitted this type of illegal conduct and has failed to enforce the Ordinance," the suit claims.

The commission tried to skirt the problem in June by creating a loophole, but Garcia argues that move illegally favors the hotel over other local businesses.

"Marriott is not a beachfront property owner, and its use of the beach to engage in business affects all beach-loving people who just want to have the freedom of enjoying the public beach," his attorney writes.

Neither Marriott nor city officials responded to multiple calls and emails from New Times about the lawsuit. Through his attorney, Garcia declined to comment beyond the allegations made in the suit.