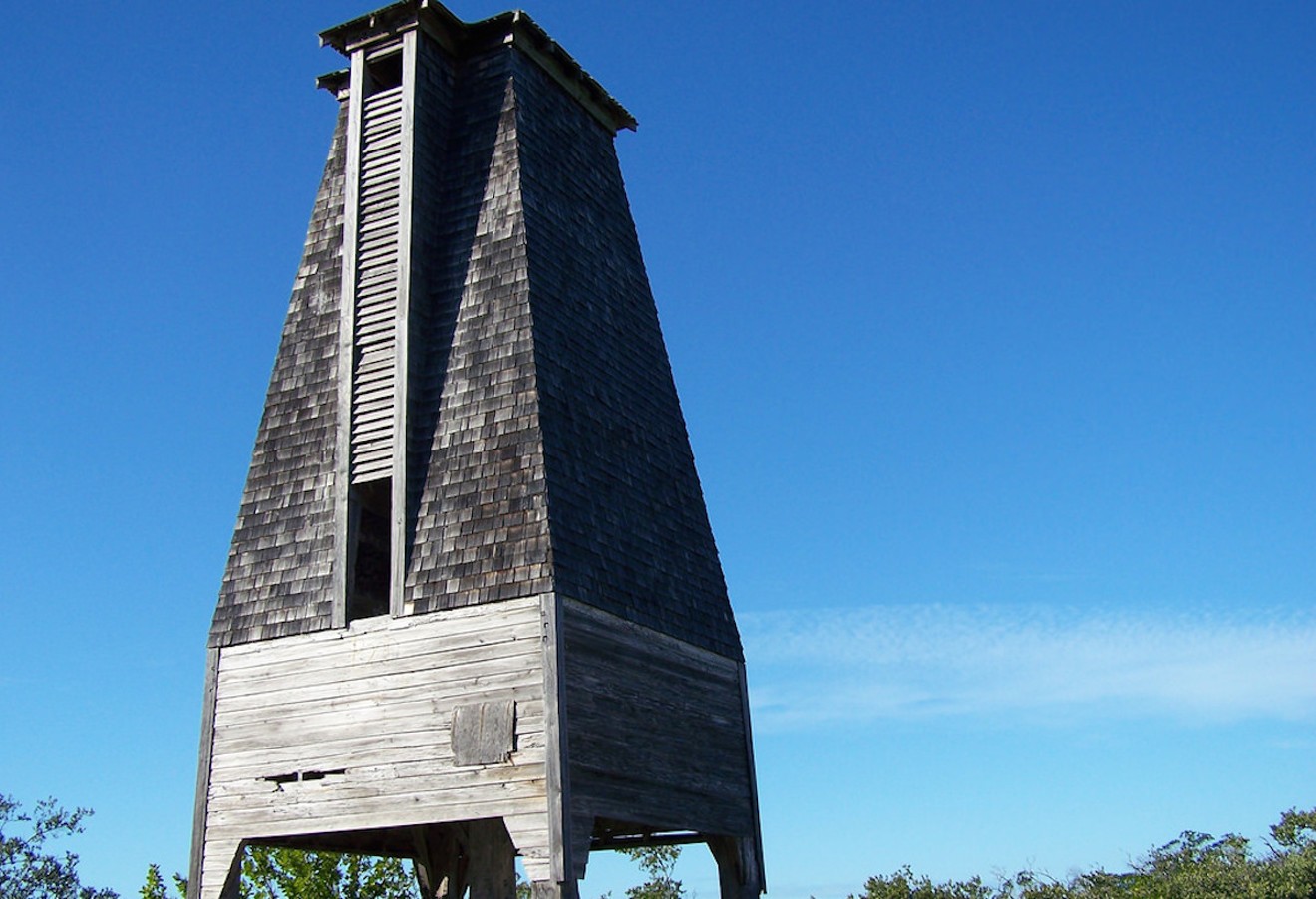 Sugarloaf Key's bat tower has stood since 1929, but Hurricane Irma downed it. Photo by Donielle / Flickr
Since 1929, Sugarloaf Key's towering bat bastion has welcomed nearly every kind of creature — except the one it was built to host. The 30-foot-tall tower was never effective at attracting bats to eat mosquitoes, as its builders had planned, but it became successful at attracting tourists and nesting ospreys.

Unfortunately, Hurricane Irma's Category 4 fury toppled the roadside attraction, which is located 18 miles from Key West's southernmost tip. Since then, many people in the community have flocked to Mile Marker 17, where the bat tower's shattered remains lay, hoping to catch one last glance of the historic monument.

"Everyone has a special place in their heart for the bat tower," says Katchen Duncan, owner of the tower and the adjacent fishing resort, Sugarloaf Lodge. "[The tower is] an awesome piece of Keys history, one that's become part of our heritage."

In the mid-1920s, Richter Clyde Perky, a real-estate developer from Denver, built Sugarloaf Lodge, a handsome waterfront resort in the lower Keys, with the intention of attracting scores of wealthy fishing enthusiasts. Though the location was ideal, Perky soon learned one unexpected obstacle stood in the way of his success: the pesky mosquito — or rather, swarms of them. According to Perky's construction manager, the numbers were so overwhelming that "in the late afternoon, you would just have to rake the bugs off your arm" and that "they'd form a black print on your hand if you put it against a screen and suck all the blood right out of it."

Concerned about his investment, Perky looked to Dr. Charles Campbell, a renowned "city bacteriologist" from San Antonio, Texas, for advice. According to Campbell's book, Bats, Mosquitoes and Dollars, bats were a natural predator of mosquitoes and therefore effective at curbing their populations. Campbell had spent months studying bats in the caves of west Texas, an experience that inspired the design of the Malaria-Eradicating Guano Producing Bat Roost, an artificial habitat in which bats could live and breed.

By 1929, Perky purchased the bat-roost plans from Campbell and paid $10,000 to erect his own bat tower — a tapered, 30-foot-tall palace. Among the tower's features were a shutter-style bat entrance with horizontal slats, a centralized excrement removal chute, and honeycomb roosting shelves made of cypress wood.

In spite of Perky's determination, his mosquito problem persisted. The problem, he learned, is that bats are not easily transplanted from one home to another. Even when planted in a new home as luxurious as the bat tower, they tended to fly back immediately to their original roosts.

With few other options, Pesky solicited the help of Campbell once again. This time, the doctor provided Perky with secret "bat bait" made of bat excrement and female bat sex organs to lure the winged critters to the tower.

As for what happened next, Keys folklore offers two versions. Some claim the bait quickly ripened under the hot Florida sun, never attracting a single bat, while others say Perky tried introducing a crate of bats, all of which immediately flew away upon their release. Either way, Perky's tower remained empty, and Campbell eventually died, never having revealed the formula for his bat bait.

The Florida Keys Mosquito Control District has since taken the reigns of the area's mosquito-control measures, such as treating standing water in manmade containers, releasing larvicide granules via helicopter, and trapping adult mosquitoes. Meanwhile, the bat tower had become a local landmark, drawing hordes of tourists eager to take photos with the Keys' infamously failed science experiment.

Throughout its 88-year life, the tower survived graffiti, carvings, litter, rotting wood, and many of the region's worst natural disasters, among them Hurricanes Andrew, Wilma, and Matthew. But Irma's winds were too much for the wooden structure.

Since then, many mourning locals have visited the site to pay their respects. "It was the only publicly accessible bat house in the country, [because] other bat houses in the country are on private land, fenced off," Duncan says. "It was a fixture in the Keys' community, and now it's gone."

Many passersby have taken pieces of the felled tower as keepsakes, but Duncan begs them to stop.

"We haven't discussed rebuilding the tower yet, but if we do, we'd like to use parts of the original structure," she says. "It's not trash yet, you know."