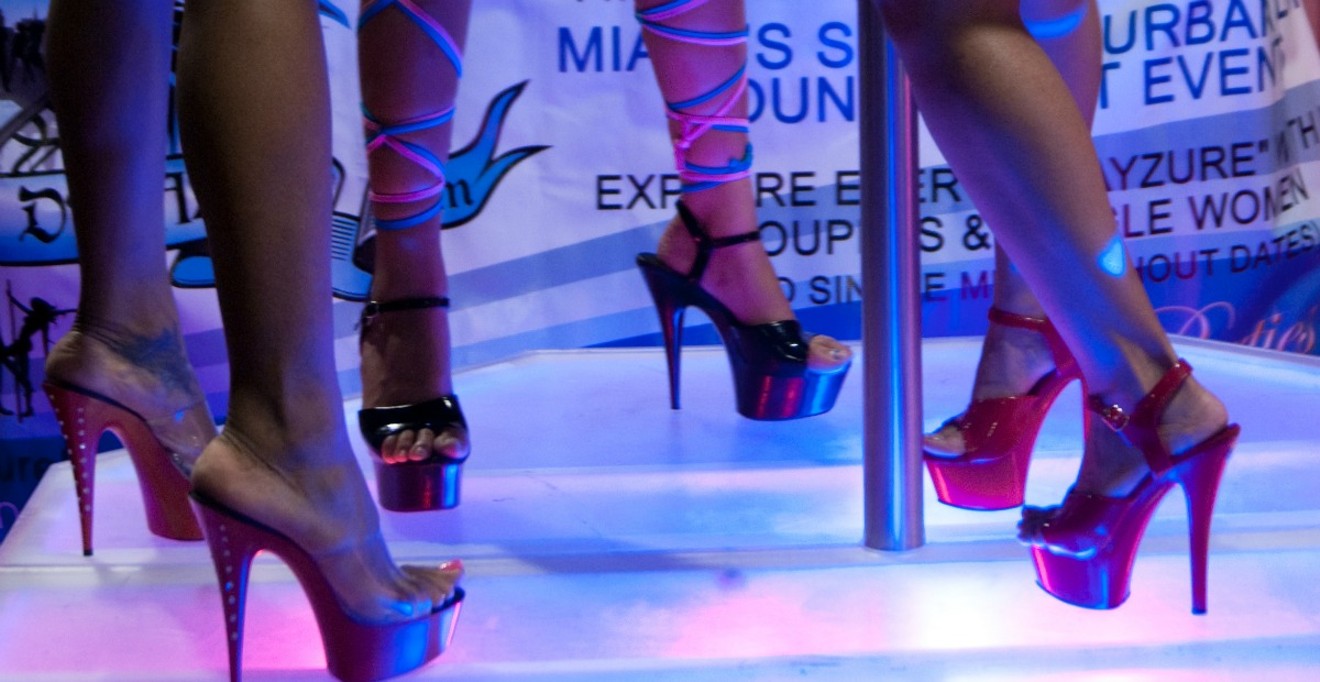 Former dancers at the club have until this coming January 19 to join the suit. The court complaint, which was initially filed on January 29, 2020, alleges that Solid Gold misclassified its dancers as lessees or independent contractors instead of employees. As a result, the suit claims, the club didn't pay its dancers an hourly wage, made them pay "house fees" to the club, and required them to share tips with employees who were not legally eligible to share in the tips.

The initial plaintiff in the case, Dayana Aguiar, is seeking $100,000 in back pay for hourly wages for a year and a half of dancing, according to the federal lawsuit, which was filed in the Southern District of Florida. That amount doesn't include the money Aguiar claims is due back in "house fees," overtime pay, and tips. As of now, six other plaintiffs have joined the suit.

Raymond Dieppa, one of the lawyers who filed the suit, says his law firm, Florida Legal, has filed several other lawsuits that allege similar labor violations against other local strip clubs, including E11even, Booby Trap on the River, Pink Pony, and Cheetah Hallandale.

"Dancers and women being exploited has been an ongoing thing that we have been working on for the last few years," Dieppa says.

Michael J. Peter, the owner of MRG of South Florida, which owns and manages Solid Gold of Pompano, did not respond to a request for comment.

While the courts have said that the clubs should make the dancers employees, Lirot says dancers don't want to be employees and that they would "laugh in your face" if you asked them to work for minimum wage.

"They'd have a ghost club. No dancer wants to be an employee. She doesn't want to show up when she's told, she doesn't want to follow any rules…. With the nature of the profession, if you will, the clubs have conceded more and more control to the performers," Lirot says.

But attorney John Kristensen, who has represented dancers along with Dieppa from Florida Legal, disagrees. And he says the decisions in favor of the dancers have been fair, based on labor laws.

"To say that these women want to be exploited the way that they are doing it, there's no way. It's nonsense. They don't want to be independent contractors," Kristensen says. "And labels don't make the law. It's what the law states you are that matters. It's the relationship. It's called the Economic Reality Test, and under the test, the clubs lose it every time."

Kristensen in some ways agrees with Lirot's assertion that the clubs are being forced to cede control to the performers, but he looks at that change as inevitable.

"They're going to have to adapt, or we are going to keep making claims and winning," Kristensen says.

Michael LeRoy, a professor at the University of Illinois College of Law and an expert on the gig economy, has studied hundreds of cases involving exotic dancers suing their employers with regards to unpaid wages and misclassification of employment. His research has found that club owners in over 90 percent of the cases are found guilty of labor violations.

"I think what you are observing with the strip-club scene is part of a larger phenomenon. More traditional employment is being converted to contract work. So I think in some sense, the dancers are like the canaries in the coal mine. Their conditions are among the most exploitative," LeRoy says. "One reason we are looking at a lot of these cases now is because there is massive underenforcement of the labor laws in general around the country, and the strip clubs are the low-hanging fruit that are easy to prove."

Sarah, a 25-year-old dancer who has been in the industry for two years, tells New Times that in her experience, suing for wages is uncommon in the adult-entertainment industry because dancers can be "blacklisted" from working at other clubs if it's discovered they have a litigious history. But in 2019, Sarah made the decision to sue Woody's, a strip club in Islamorada, and eventually won her case.

"Luckily, I took pictures of the contract the club made me sign…. It stated that I was a W-2 employee," Sarah says. "Then they tried to force me to work a day shift. If you're going to pay me like a stripper [as an independent contractor], that's how I'm going to work."

Being in the industry comes with a host of costs that dancers must navigate if they hope to make money. Sarah says the clubs where she has worked have charged house fees ranging from $30 to $75 per night.

And house fees, which can be as high as $150, are only the start. Dancers generally have to tip out the bartenders even on a slow night (usually around $6 per bartender). The floor man in the club gets a $5 to $6 tip-out, while the DJ will get anywhere from $15 to 20 percent of the dancers' tips. Even the employee who walks the dancers to their cars at the end of their shifts generally gets $6 to $8. Often there's a manager tip-out, which can range from $5 to $10.

But Lirot says the clubs have their own costs to cover, which makes it frustrating for his clients and other strip club owners when one of their dancers sues.

"To know that some performers went home making $100, $200 an hour, when you know they used your resources… it's very painful and frustrating and feels like an act of betrayal for the club owner. It also augments the negative view that people have of exotic dancers of being somewhat avaricious, if you will," he says.

"When dancers are able to tell their story to a sympathetic legislature and specifically have written in the law that the dance industry is explicitly covered under a statute, that's what they really need," he says. "And that's really hard to get, so that's why they have to go the legal route."
KEEP MIAMI NEW TIMES FREE... Since we started Miami New Times, it has been defined as the free, independent voice of Miami, and we'd like to keep it that way. With local media under siege, it's more important than ever for us to rally support behind funding our local journalism. You can help by participating in our "I Support" program, allowing us to keep offering readers access to our incisive coverage of local news, food and culture with no paywalls.
Make a one-time donation today for as little as $1.