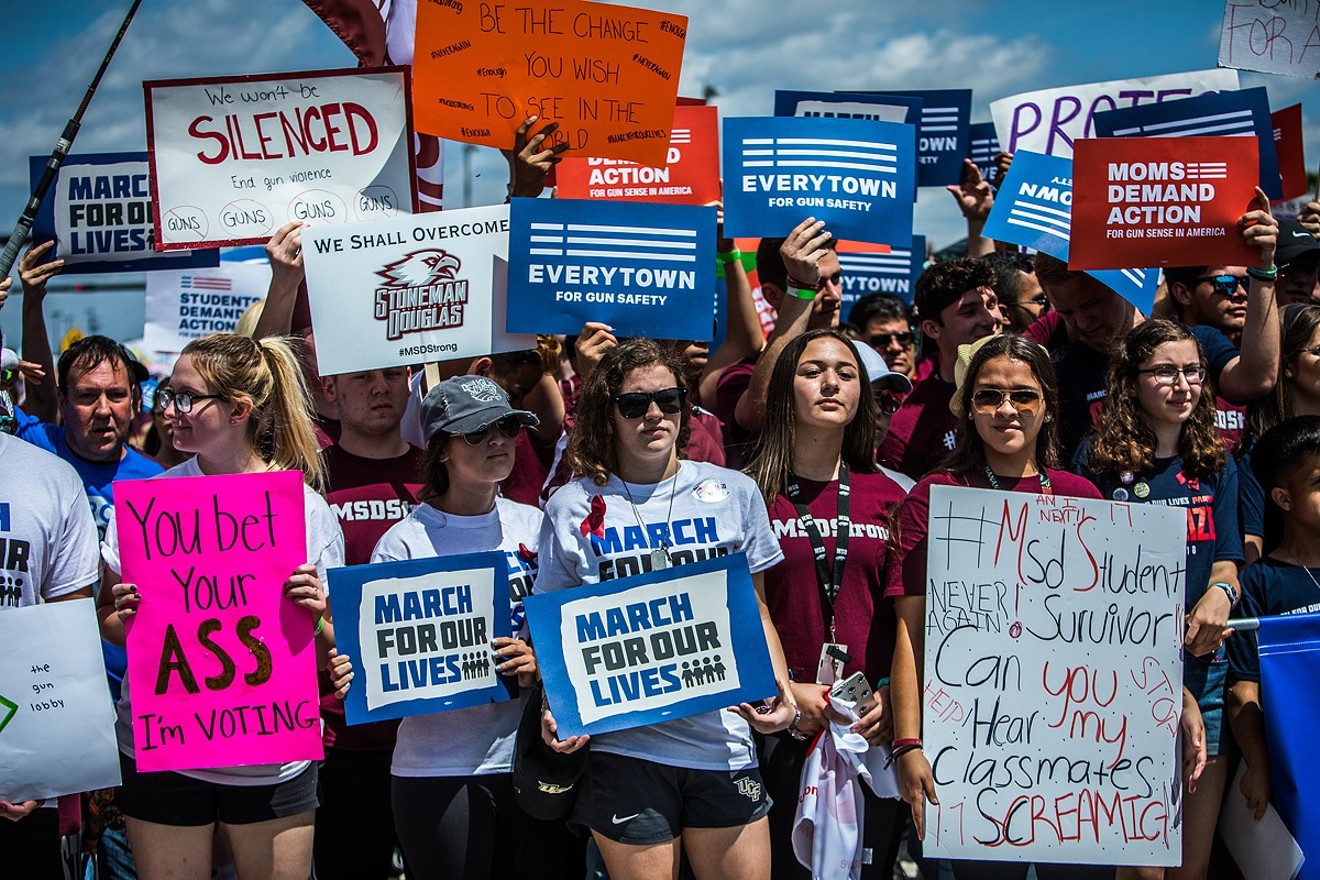 Protesters with March for Our Lives, Moms Demand Action, and Everytown at a Parkland rally in 2018. Photo by Ian Witlen
click to enlarge

Protesters with March for Our Lives, Moms Demand Action, and Everytown at a Parkland rally in 2018.
Photo by Ian Witlen
In a post-Parkland world, Florida lawmakers made an extremely logical and not-at-all-crazy move to prevent school shootings by passing a bill allowing teachers to bring guns to school and act as a scholastic militia. Since the passing of this legislation, researchers have some news: This actually won't help at all.

The University of Toledo and Ball State University released a joint study earlier this month that synthesized existing research on school shootings and measures taken to prevent them. The 14-page study took about nine months to complete as the researchers reviewed literature from 2000 to 2018 relating to gun violence in schools, according to Jagdish Khubchandani, a professor of public health at Ball State and co-author of the study.

"Most politicians are reacting very quickly to public outcry about school shootings, and they're promising money and resources," Khubchandani tells New Times. "We wanted to do actual research to see if it helps reduce the violence."

But the study found that attempts to "harden" schools by implementing metal detectors and making students wear clear backpacks have little to no effect on the prevalence of school shootings like the one at Marjory Stoneman Douglas High School. Instead, such efforts make children feel like they're attending prisons instead of schools. The researchers found no evidence that those methods make schools any safer.

Khubchandani says his team also looked at attempts to minimize gun violence by arming teachers, a plan the Florida Legislature recently passed. The study found such measures would be unlikely to protect students and more prone to negatively affect the school system.

"It boggles my mind that they want to arm teachers in Florida. It will require a greater cost of resources to arm the teachers and train them to use guns, money that can be used to hire mental-health personnel and raise teachers' salaries," Khubchandani says. "And as an educator, I don't think I'm supposed to fight."

Plus, Khubchandani says a bigger problem is firearm-related suicides. More kids in America kill or hurt themselves using guns than die in school shootings, but he says because of media coverage the public and politicians focus more on mass shootings.

The Broward County school district has already said it won't arm teachers, a decision left to Florida counties under the state law. Miami-Dade County Public Schools followed suit on June 19 by formally opposing the idea with a unanimous vote.

"I vehemently oppose arming teachers in the classroom," said Steve Gallon III, a Miami-Dade school board member and proponent of the item. "I'm baffled to think of a world where students go to a school where their teachers have guns."
KEEP MIAMI NEW TIMES FREE... Since we started Miami New Times, it has been defined as the free, independent voice of Miami, and we'd like to keep it that way. With local media under siege, it's more important than ever for us to rally support behind funding our local journalism. You can help by participating in our "I Support" program, allowing us to keep offering readers access to our incisive coverage of local news, food and culture with no paywalls.
Make a one-time donation today for as little as $1.