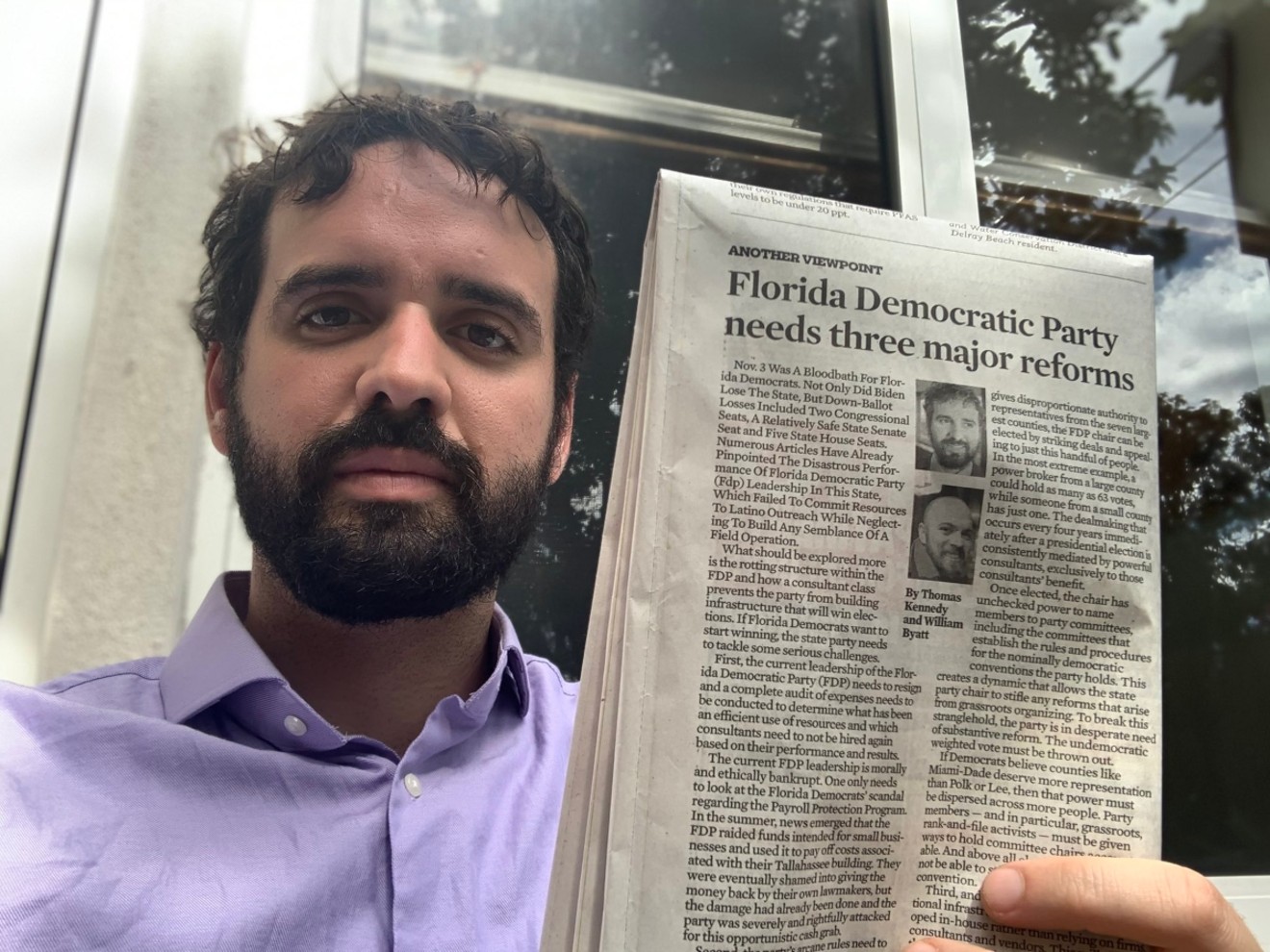 Activist Thomas Kennedy launched a podcast analyzing some of the party's most recent failures. Photo by Thomas Kennedy
After the November 3 election, when Republicans nabbed five seats in the Florida House of Representatives, one seat in the Florida Senate, and two seats in U.S. Congress from incumbent Democrats, lawmakers called the losses a "systemic failure" of the Florida Democratic Party and demanded sweeping changes.

Some voters wondered what went wrong, and politicians and activists started speaking up about longtime problems within the party in Florida. Thomas Kennedy, a progressive activist in Miami, recently launched a podcast analyzing some of the party's most recent failures and proposing solutions.

"This isn't to trash the Florida Democrats," Kennedy says. "We just want to identify some of these problems, name them, explain them to people. It's about what we need to do to make our party better."

Kennedy says the party has a long history of blistering embarrassments and general ineffectiveness. Democrats outnumber Republicans in voter registration in the state, but Republicans have had control of Florida's House, Senate, and governorship for 20 years. In recent years, Democratic Party leaders have been criticized for saying low-income voters don't care about "issues" and only vote because they're "emotional beings." Some have quit because Black voices were being ignored, and others resigned in shame over sexual harassment scandals.

This summer, party leaders were shamed into returning a $780,000 Paycheck Protection Program (PPP) loan that should have gone to small businesses affected by the COVID-19 pandemic. And most recently, lawmakers have piped up to say that the party had no field strategy, no vision, no meaningful community outreach, and no nuanced campaigning for the 2020 general election.

Time and time again, the party has been criticized for assuming it knows what voters want rather than asking.

"Democrats assume that voters of a certain color, age, and gender will automatically vote with us," state Rep. Anna Eskamani, whose Florida House District 47 covers Orlando, said in a Sun-Sentinel op-ed after the election. "What my party fails to realize is that you can't buy this support, you have to build it."

Kennedy digs into some of those criticisms with guests Dwight Bullard, a former state senator and current political director of New Florida Majority; Juan Cuba, former chair of the Miami-Dade Democratic Party; and Eskamani. The weekly podcast, called Red Tide Radio, is available on Soundcloud.

In the first few episodes, those guests have discussed how the Florida Democratic Party has turned into what Kennedy calls "a personal bank account" for consultants and vendors. Kennedy says on the podcast and in a Sun-Sentinel op-ed that party leadership needs to resign, and the party needs to be rebuilt. (Party chairwoman Terrie Rizzo stepped down last Thursday, paving the way for new leadership at the state level.)

In the inaugural episode, Bullard brought up some of Florida's political history and how that history is repeating itself today.

"What you saw [in the 2020 election in Florida] were the vestiges of the Southern strategy working," Bullard said on the first episode of the podcast. "The Republican Party being able to tap into white insecurities around race and racial issues manifesting itself into political turnout. But no one wants to have that reckoning."

Cuba went in on Miami-Dade politics and issues within the Florida Democratic Party. On the election results in Miami-Dade, Cuba said: "It's heartbreaking and disheartening [what happened in 2020]. I've had to really reflect on that."

"We've got two choices: quit, or keep going. And we've got to keep going," he added. "There isn't the other option. Now we have Carlos Giménez, who is just a Trump lackey, in Congress. We have Maria Elvira [Salazar] in Congress, who is like a McCarthyist trying to find communists in her closet or something, and we've got really bad leadership in the state. So we have to keep fighting. There is no other option."

In the third episode, Eskamani offered encouragement to grassroots organizers and activists who feel dispirited by the state's election results. She said it's difficult to be a strong activist for progressive values in a state led by Republicans, and that organizers will sometimes move away because they feel they can get more done outside of Florida.

"I would encourage you to keep focused, know you're not alone, and continue to ask yourselves, 'How can I build power for my community today?'" she said. "Power is not a scarce resource. We build it together."

Kennedy says he hopes the podcast will be illuminating for people interested in what's going on in state politics. He also hopes people will get involved in grassroots organizing and become active in the political sphere.

"I'll just say that if you're a person that's tired of living under a two-decade-long Republican trifecta, or even if you just care about political balance of power, you need to get involved," he says. "It's not even healthy for a political party to be in power that long. The Florida Democratic Party is not functioning as a basic organizational structure. It just doesn't work. There's no reason why a state like Kentucky can elect a Democratic governor, and Florida is just constant losses. We're going backward. Our community is hurting as a result. It's everyday people that pay the price for this consistent record of failure."
KEEP MIAMI NEW TIMES FREE... Since we started Miami New Times, it has been defined as the free, independent voice of Miami, and we'd like to keep it that way. With local media under siege, it's more important than ever for us to rally support behind funding our local journalism. You can help by participating in our "I Support" program, allowing us to keep offering readers access to our incisive coverage of local news, food and culture with no paywalls.
Make a one-time donation today for as little as $1.