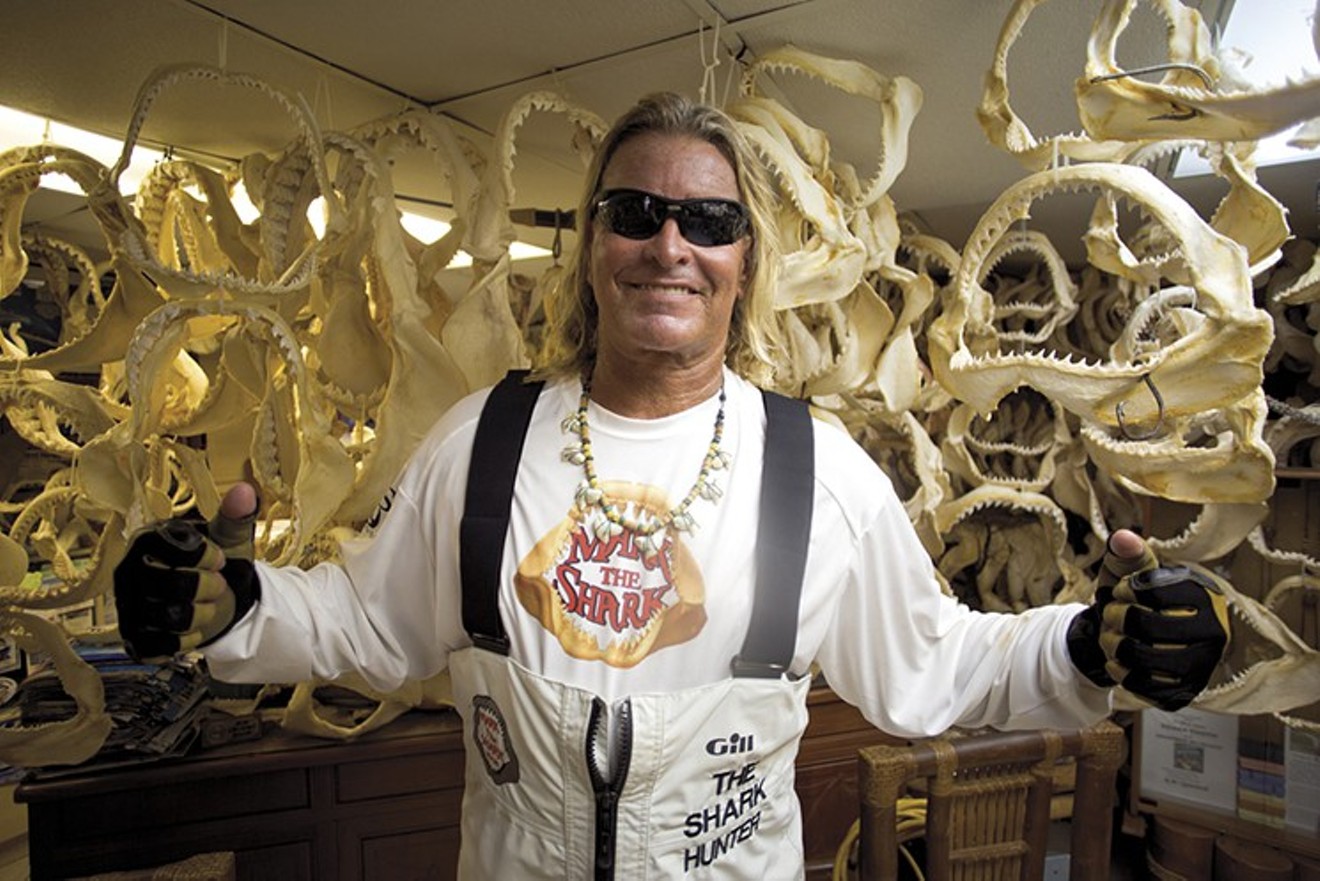 Mark Quartiano has drawn criticism for the number of sharks he kills. Photo by Stian Roenning
In an Instagram video posted in July by Miami's infamous deep-sea hunter Mark the Shark, a hammerhead shark is shown hanging by a rope, suspended above a trio of smiling tourists. One of the men slaps the animal as it sways from side to side. Another raises his Corona Light in the air. All three flash a thumbs-up to the camera.

The clip is a somewhat tamer version of the usual content on Mark Quartiano's Instagram page, which boasts 117,000 followers and often includes shots of bikini-clad women, videos of people puking off the side of his boat, and footage of dead or soon-to-be slaughtered sharks.

Nonetheless, when a screenshot of the hammerhead post was shared last week in a Whatsapp group chat for Florida International University students studying conservation, biology, and sustainability, it was more than enough to spur them into action. The following day, after falling down a Quartiano-research rabbit hole, they launched a petition urging state and local authorities to take action and pleading for Floridians to stop supporting his charter business.

"I just couldn't believe it," says Gigi Gonzalez, a 24-year-old sustainability and environment student at FIU. "You know, I thought hammerheads were protected. I had no idea you can actually fish them, and a lot of other people felt the same way."

Quartiano has long been the subject of complaints from animal-rights activists. The Florida Fish and Wildlife Conservation Commission (FWC) has received approximately 30 complaints this year regarding Quartiano, according to spokesperson Carol Lyn Parrish.

The students' petition is addressed to the FWC, the Florida Conservation Group, the Florida Department of Environmental Protection, and local leaders including Miami Mayor Francis Suarez, Miami Beach Mayor Dan Gelber, and Miami-Dade Mayor Carlos Giménez. It calls on them to implement changes in the local shark-fishing regulations.

As of Tuesday, the petition had just over 1,500 signatures.

"Reporting him to authorities has not resulted in any meaningful change because of a loophole," the petition reads. "We cannot allow one man's egotistical monster-hunter fantasy to wreak havoc on our coastal waters and on the public's perception of sharks. "

According to the FWC, a number of protected species, including hammerhead sharks, cannot be killed or butchered for their fins or meat in Florida waters. However, Parrish explains, the agency only regulates state waters. Protected sharks that are legally caught in U.S. federal waters off Florida — i.e., beyond three nautical miles from shore — can be brought back to land.

Given that it's legal to fish for hammerhead sharks with the proper permits, Parrish tells New Times, without knowing where the sharks were caught, she can't say whether Quartiano's videos of hammerheads and tiger sharks violate FWC regulations.

Gonzalez says that while Quartiano may be acting within the law, he's engaging in activities that harm the apex predators and the local ecosystem as a whole. Of the issues she and other students have with Quartiano, she says the most important might be his rejection of evidence-based facts.

The fisherman's anti-science frame of mind is featured — among other places — at around the 24-minute mark of the 2018 documentary Sharkwater Extinction. The film, which explores shark-fin trade, includes a scene of Quartiano aboard his boat in Miami with filmmaker Rob Stewart. After Quartiano tells Stewart that the most common sharks he catches are hammerheads, Stewart asks the fisherman if he believes that great hammerheads are endangered.

Gazing out into the vast water as the vessel rocks back and forth, Quartiano answers without hesitation.

"No. Negative. No hammerheads are endangered," Quartiano says firmly. "There's plenty of them out here, I catch them every trip. That's all Shark Week propaganda."

In a phone interview from his boat, Quartiano doubles down on his beliefs. He tells New Times that facts about the endangered status of hammerheads are "bullshit" and "fake news," adding that he gathers his news "firsthand" while out on the water.

"I live in the real world, and I see what's going on out here," Quartiano says. "If they're endangered, sweetheart, then why do I catch them every single day of my life?"

Despite Quartiano's misinformed beliefs, two hammerhead species — Scalloped and Great — are well-documented as being critically endangered globally, according to the International Union for Conservation of Nature's Red List of Threatened Species.

Quartiano's own website acknowledges the hammerhead's endangered status, with a page dedicated to listing various information and background on the sharks. Directly beneath a section on the page that explains the conservation status of the sharks is a link that reads "RESERVE NOW !!!" and redirects to a reservation form for Quartiano's fishing charter.

“I don't understand that level of cognitive dissonance," Gonzalez wrote in an email to New Times.

Mahmood Shivji, a professor at Nova Southeastern University who oversees the Save Our Seas Shark Research Center and Guy Harvey Research Institute, explains that part of the reason hammerheads are captured in commercial fisheries and bycatch is that their fins are exceptionally valuable.

In other words, the international trade in shark fins has led to overfishing.

"They should not be killed just for the sake of pictures," Shivji says. "And overall, engaging in practices like that and then putting it out on social media just creates a general perception in the public that this stuff is fine. And it's not fine, from a conservation perspective."

Much of the criticism of Quartiano over the years involves his use of anti-shark rhetoric and fearmongering. A number of posts across his Instagram page that showcase dead or dying hammerhead sharks include his hashtags #keepingthebeachsafe and #catchingmonsters.

In one Instagram video posted May 21, a hammerhead shark — which appears to have part of its entrails protruding — is shown being maneuvered and dragged onto a dock. The caption reads: "Another bad hammerhead bites the dust!"

Gonzalez emphasizes that it's unnecessary to target hammerheads on the basis that they're "monsters" or "dangerous," given how few attacks they've been involved in over the years. According to the International Shark Attack File, humans around the world have been subjected to only 15 unprovoked attacks by hammerhead sharks since the early 1500s. No human fatalities have ever been recorded.

"[Quartiano] is very much a symbol of this outdated notion that sharks are monsters that need to be culled, that waters are shark-infested," Gonzalez says. "You know, I hate that word 'shark-infested,' because it can't be infested if that's where they live."

Shivji calls Quartiano's belief that killing hammerhead sharks helps make the beaches safer "complete rubbish," adding that an ecosystem can only keep itself in natural balance if upper-level predators like sharks aren't overfished.

"His followers definitely need to be aware or understand that what he's telling them, particularly with regards to hammerhead sharks, is just is wrong," Shivji says. "The wrong thing to do is to pretend that you're making things safer for tourists to go to the water by fishing out sharks. You're disrupting entire ecosystems, disrupting the natural balance of water in the ocean."

Quartiano tells New Times he releases about half the sharks he catches. But a 2014 study on the effects of catch-and-release fishing by researchers at the University of Miami found that hammerheads are "by far the most vulnerable to fighting on a fishing line," more sensitive than species such as tiger sharks, which show far more ability to recover after being released.

Quartiano, whose website bills him as "the most recognized name in shark fishing in the world," carries a long history of proudly riling up animal activists and other environmental groups. Back in 2005, he circulated a photo of himself lying on top of a heap of four dead sharks to newspapers and TV stations across Miami. Blared the accompanying press release: "First ever grand slam of killer sharks caught off Miami Beach by Mark the Shark!"

At the time, one of the sharks — a bigeye thresher — was federally protected. According to Miami-Dade County court records, Quartiano was charged for not landing a fish in whole condition, a misdemeanor. Records show the charge was dropped after Quartiano completed a pretrial diversion program.

More recently, in 2018, he came under fire after posting a video of himself clutching and shaking a bird by the neck with the caption, "PETA THIS!!!" FWC's law-enforcement division opened an investigation but New Times was unable to determine the outcome.

Several petitions have been created in response to Quartiano's treatment of deep-sea predators — including in 2012, 2015, and 2017 — with advocates calling on authorities to revoke Quartiano's charter and fishing license. A Facebook group created in 2015 by Great White Conservation and Scientific Research called "Stop Mark The Shark" has nearly 600 members.

Despite the activism, Quartiano's image has remained intact. If anything, his follower base has grown — since 2016, he has gained nearly 100,000 followers on his Instagram page. His YouTube account, created this past May, has nearly 700 subscribers.

When asked by New Times whether he has any plans to quit killing sharks, he responds, "Never."

And, in a series of recent Instagram posts, he has begun targeting his new critics. Yesterday, Quartiano reposted a selfie of a young child who blasted his treatment of endangered species, captioning the post, "Today's 'Kook Magnet' What are they teaching in schools now a days? #Lgbtqwtf"

Gonzalez says Quartiano's "weird cyberbullying" is indicative of the "macho" attitude his fans worship. But based on the tone of his latest posts, she has a feeling the FIU students might be getting under his skin.

"I think there's a lot of power in my generation," she says. "I have no guarantee that I can make a difference, but I feel like if it was ever gonna happen, you know, now's the best time."
KEEP MIAMI NEW TIMES FREE... Since we started Miami New Times, it has been defined as the free, independent voice of Miami, and we'd like to keep it that way. With local media under siege, it's more important than ever for us to rally support behind funding our local journalism. You can help by participating in our "I Support" program, allowing us to keep offering readers access to our incisive coverage of local news, food and culture with no paywalls.
Make a one-time donation today for as little as $1.